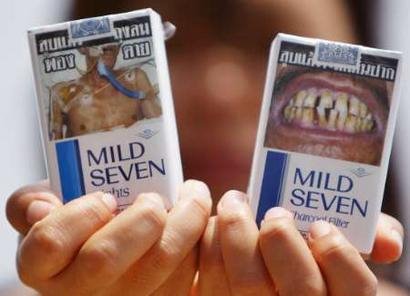 People happily acknowledge that graphic images can bring home the truth and save lives, as long as the context isn't abortion! The federal government has proposed requiring cigarette manufacturers to include graphic photographs of cancer-striken people and organs on their packaging. From the Washington Post:


The proposed warnings include one containing an image of man smoking with a hole in his throat from a tracheotomy; another depicts a body with a large scar running down the chest, and another shows a man who appears to be suffering a heart attack. Others have images of diseased lungs and stained teeth and mothers blowing smoke into a baby's face.

The parallels to pro-life images are hard to miss. Many children's lives have been saved by images of the results of abortion. Smoking, like abortion, is a legal choice that the government seeks to dissuade in order to save lives. And, just as abortion businesses fight informed consent laws, cigarette manufacturer R.J. Reynolds is planning a lawsuit to protect its bottom line:


Meanwhile, Reynolds American Inc., parent company of the nation's second-largest cigarette maker, R.J. Reynolds, is reviewing the labeling plan. But spokesman David Howard said the legality of the new labels is part of the lawsuit filed by the company, Lorillard Inc. and others pending in federal appeals court.

The tobacco makers in the suit had argued the warnings would relegate the companies' brands to the bottom half of the cigarette packaging, making it "difficult, if not impossible, to see."

Ironically, Health and Human Services Secretary Kathleen Sebelius, who is extremely pro-abortion, supports the new cigarette labeling plan. Let's hope that this initiative not only prevents smoking-related deaths, but also sets a favorable pro-life precedent.
Posted by secularprolife.org at 2:01 PM

I thought the exact same thing. I'm generally quite conflicted about the use of graphic images personally and as a matter of strategy. As an issue of free speech and exposing the truth I entirely support the right to use the images even if I am predisposed to question the wisdom of doing so. (Of course it's important to mention that not only do some pro-choice people dispute that such a right exists, but that someone was killed for exercising that right.) I still believe that we need to be reticent in and very cautious about the use of the images, but the HHS statements pushed me a bit more in the "use" (as opposed to "don't use") direction.

Two points of interest:
-One of the cigarette warning images ["another depicts a body with a large scar running down the chest"] is a man on his back with his eyes closed and a large 'Y-incision' on his chest. This is obviously a depiction of a corpse after an autopsy. I rather doubt that someone dying from lung cancer would typically be autopsied, but this image and the one of diseased versus healthy lungs both explicitly depict images of death, which ought to make objections on that basis particularly more difficult to make against the abortion images.
-Are there many pro-choice people arguing that the abortion images actually come from miscarriages? I came across this once and wasn't sure what to make of it.