Last week, Planned Parenthood of the Heartland filed a lawsuit against a recent regulation issued by the Iowa Board of Medicine. That regulation declares that webcam abortions cannot be conducted in that state. A webcam abortion (sometimes called telemed abortion) is exactly what it sounds like: a doctor who never examines the patient in person prescribes the abortion pill via a system like Skype. 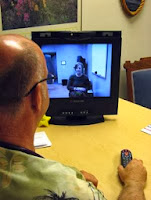 In a sane world, the common reaction would be "Wait, you mean webcam abortions were allowed before?" Alas, we do not live in a sane world.

Planned Parenthood's position is clearly out of line with its professed commitment to women's health. The real motivation is expansion of abortion profits.

Planned Parenthood’s sprawling Midwest affiliate introduced the web-cam abortion to Iowa in 2008. PPH has since metastasized. One by one it has swallowed up nearby smaller local affiliates. PPH announced a merger with PP of Nebraska and Council Bluffs in August 2009, another with PP E Central Iowa in December 2010, a merger with PP SW Iowa in May 2011, and in 2012 last year merger with PP of Arkansas and Eastern Oklahoma. It’s announced plans to open six new clinics in Nebraska and another six in Iowa.

Expansion is the short-term goal. In the long term, they want to use webcam abortions to "solve the problem of graying abortionists." Most new doctors would rather heal than kill, which causes serious migraines for the abortion lobby.

Allow me to propose a hypothetical. Suppose an organization like And Then There Were None crops up in the weapons industry. They convince people to stop manufacturing guns. As a result, gun access becomes severely restricted, and in many areas, law-abiding people find it difficult to exercise their Second Amendment rights. Would the NRA respond by demanding that people be allowed to purchase guns online, to be shipped in the mail, and with no background checks?

...well, maybe it would. But it would be wrong. It would be abandoning all common sense about safety. And Planned Parenthood of the Heartland has done the same with this ridiculous lawsuit.
Posted by secularprolife.org at 7:09 AM

With Gov. Jerry Brown's law expanding abortion to non-doctors Planned Parenthood will have "growth" and "profits" in that state. California will have a growing abortion business model. Not sure if, or has, passed New York's number of "61" known abortion doctors but they sure will challenge New York.