[EDIT: A prior version of this article stated abortion rates "per 100,000 women of reproductive age." The Guttmacher Institute actually uses a rate per 1,000 women. We regret the error. Unfortunately, it's too late to change the graphic.]

Last week, Hemant Mehta (the Friendly Atheist) spotlighted an interactive map from the American Values Atlas, which makes it easy to compare the religious affiliations of people in various states. He noted that "[n]ext year, it’ll expand to include data on state-by-state views on topics like immigration, abortion, and LGBT issues." On abortion, I quickly put together a sneak peek.

To indicate state policies on abortion, I'm using Americans United for Life's most recent Defending Life rankings (in which #1 has the greatest protections for prenatal life).* As we live in a democracy, this is a rough proxy for public opinion in the state, albeit not a perfect one.

To measure pro- or anti-abortion behavior, I'm using two statistics, both from the Guttmacher Institute. One is the percentage of pregnancies in a state that end in abortion. The other is each state's abortion rate per 1,000 women of reproductive age. This second figure is influenced not only by whether or not a woman decides to have an abortion, but by the decisions she and her partner make before conception (e.g. abstinence and contraception). 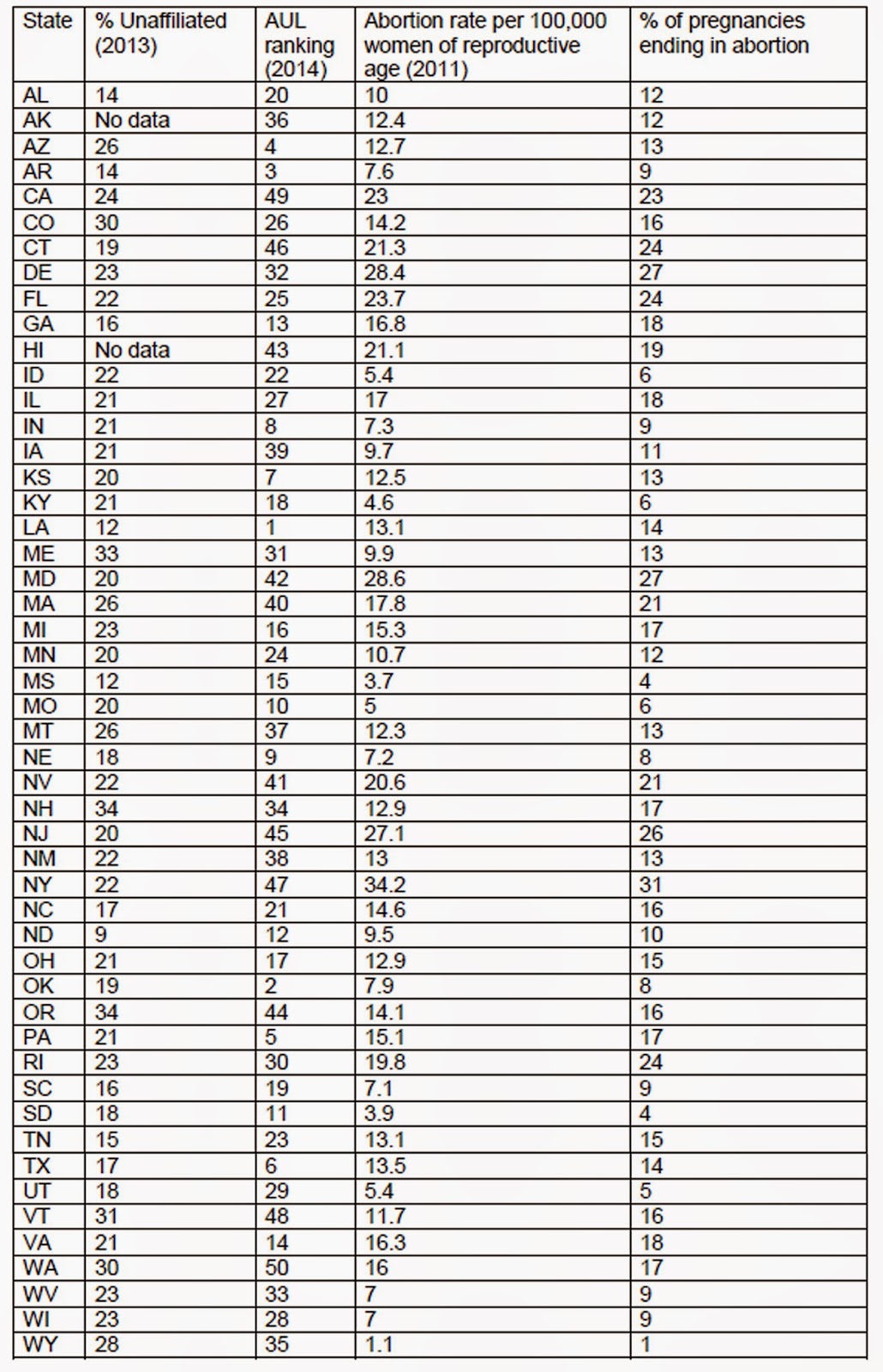 ...so what does that tell us? Not much, I'd posit. The problem is that this data provides ammunition to anyone, including both extremes.

A fire-and-brimstone preacher inclined to paint atheists as baby-killing (if not baby-eating) menaces to society could point to Massachusetts and cry A-ha! They have 5% more heathens than they should, and it shows with awful state policies, higher-than-average abortion rates, and women with unplanned pregnancies gravitating toward abortion. Compare that to Louisiana, AUL's #1 state in the country with very low abortion rates; no doubt that's thanks to the fact that by the grace of God, only 12% of the state is unaffiliated. Similar stories in Mississippi and North Dakota. A heaping dose of religion must be what's keeping the babies safe.

But wait!, says the caricature of a pro-choice atheist who's eager to prove that abortion is correlated with religion-based ignorance when it comes to preventing unplanned pregnancy. Wyoming has 7% more unaffiliated residents than the national average, and it has the best abortion statistics in the nation! And look at Maine, Colorado, Montana, New Hampshire: their policies may be in the middle of the pack, but they keep their abortions down through other means. (My hypothetical abortion advocate would probably leave out Arizona, which is more than a quarter unaffiliated and ranks #4 on AUL's list; it, too, enjoys low abortion rates,) Meanwhile, the abortion rates for the deluded people of Georgia are almost exactly the national average, and Maryland is slightly more religious than the national average but its abortions are through the roof. Pray on that.

None of which is productive, obviously.

Is there some correlation? Probably (there's no deeply religious state with sky-high abortion rates), and I look forward to the full analysis from the American Values Atlas, but I suspect it's a pretty weak one. Abortion is much more strongly influenced by economic factors and education than by levels of religious affiliation.

*I realize that most of our pro-choice readers will dislike this phrasing ("protections for prenatal life"), but because I interned at AUL, I know that more goes into the rankings than pure abortion restrictions; they also look at policies respecting treatment for pregnant mothers with substance abuse issues, etc.
Posted by secularprolife.org at 7:19 AM

I know that more goes into the
rankings than pure abortion restrictions; they also look at policies
respecting treatment for pregnant mothers with substance abuse issues,
etc.

It is always good to see pro-lifers remembering that whether or not a fetus is aborted is not the only possible issue to be concerned about.

Do they have a breakdown of their rankings? This might be of independent interest for people who care about which is the best state for a wanted pregnancy.

Also, when you say "policies regarding treatment for pregnant mothers with substance abuse issues"...does that distinguish between, say, providing treatment free of charge, and states that punish women for using dangerous substances while pregnant?