"At some point, all of humankind seems like kin": A pro-life review of Undeniable by Bill Nye

I recently read Bill Nye's Undeniable, on the subject of evolution. I read it purely because of my interest in the evolution versus creationism debate; I didn't expect it to contain any commentary about abortion. Alas, it seems I can't escape. 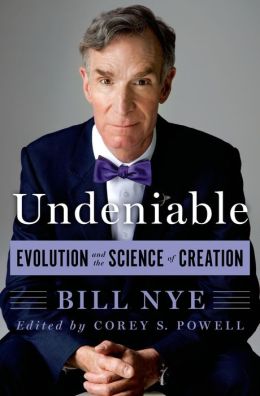 Actually, to be precise, the abortion commentary began as a segment about opposition to embryonic stem cell research (ESCR). But from there Nye made a rough transition to "extraordinary laws that are intended to legislate or control what goes on in a woman's womb," and then went on to make a giant skip, leap, and jump to the idea that human life begins at birth:


There is, for example, the strong belief that life begins at the moment a human egg accepts a human sperm and is thereby fertilized. But that's not exactly what happens, or more accurately what has to happen. Once the egg has accepted a sperm and its Y-shaped or X-shaped chromosome, it has to attach itself to the wall of the female's uterus. If it doesn't do that, there will be no baby in the works. After attaching to the uterine wall, the fertilized egg forms a cup shape and three layers. This is "gastrulation" because, if you use your imagination, the cup shape reminds you of part of an intestine. (This business of medical terms based on Greek and Latin is part of why it takes four years to get through medical school.)

...I mention this because our lawmakers spend a great deal of time in town hall meetings and on our legislative debate floors considering laws based on the idea that fertilized eggs are the same as people...

I hope it gives some of us pause for thought to realize that fertilized eggs pass right though women into the environment all the time. Put bluntly, un-gastrulated fertilized eggs become sewage. Are the women who produced these cells to be prosecuted for violating some church-driven law? ...

...Without basic research, this odd debate and these extraordinary laws that are intended to legislate or control what goes on in a woman's womb would not be possible...

This fundamental insight that living things produce a surfeit of eggs and sperm, more than can survive, goes back to Darwin's work on competing populations and figures prominently in any understanding of biology and evolution. For me, this makes every baby that much more precious—after the egg successfully develops and a baby is born, not before the egg even attaches to its mom.

I was surprised and disappointed to see Bill Nye take this train of thought, because earlier in the book, he (1) concluded that viruses may qualify as "life," despite them having less in common with us than embryos do, and (2) admirably explored in depth the fact that every human being ever to exist either has died or is going to die. On that second point, he hypothesized (and I'm inclined to agree) that the fear of death is a major obstacle to public acceptance of evolution. In light of that previous discussion, the fact that many young embryos die before maturing any further clearly does not suggest that they are non-human or non-alive, any more than the existence of SIDS rebuts the idea that newborn infants are human and alive.

(And for about the millionth time, I would no more prosecute a woman who miscarried than I would prosecute parents who had lost their child to SIDS, or any other natural death. Prosecuting people for the natural deaths of their offspring is just not nice. What bearing does this have on the ethics of killing someone on purpose? Good freaking question.)

What Nye is really doing, of course, is making a value judgment. It's his right to believe whatever he wants, but if he's going to use such sloppy reasoning, he should expect to be called out on it.

Speaking of sloppiness, how about the nine-month gap between a brand-new zygote trying to implant and a full-term fetus whose forehead is inches away from the birth canal? The mention of "women's wombs" is quite clearly a reference to abortion, not ESCR, as ESCR takes place entirely in vitro. But abortion never involves an unimplanted zygote, for the simple reason that pregnancy tests are not accurate that early in pregnancy. Abortion's victims are considerably further along in their development.

On January 22nd, the day of the March for Life, the House of Representatives will vote on legislation that bans abortion after twenty weeks—roughly the second half of pregnancy. Are those babies "precious" enough for him?

Earlier in the book, Nye had this to say about the evolutionary origins of human altruism:


Uncle lions often become beta-males and are subservient but helpful all at once. Even though they are not the parent, they are deeply genetically invested. Such is life.

It goes even beyond that. As the thought experiment extends to include our whole human family, our kin-selection choices expand to include the whole of humanity, as happens to those who [would rescue] a stranger's child over their own mother... At some point, all of humankind seems like kin.

Couldn't have said it better myself. He continues:


...This is not just a hypothetical situation. As I write, there was a recent, highly celebrated incident in which a firefighter in Houston, Texas, risked his life by directing his fire truck ladder to set right up against an enormous apartment-house fire. The building was unfinished, and the wind carried the flames through the open-frame lumber like a hot knife through soft butter. The firefighter got right up next to the building, which allowed a construction crewman to jump from the flaming unfinished building to the ladder. A moment later the building collapsed in a flaming hot mess, missing the two men by millimeters. The incident was caught on video.

All of North America watched as one of these two unrelated guys risked his life to save a stranger. We celebrated their bravery and especially the selflessness of the firefighter. Newscasters speculated as to whether or not they'd ever have reason to sit down together for a beer or just go their separate ways. There was no question in any viewer's mind whether the firefighter and his team on the truck below did the right thing. Of course they did. Saving another life is what we do, whether we're related or not. Thinking a little further along this line, one can imagine that those among us who would not save another's life are generally unwelcome. They are, we might assume, less likely to meet a husband or wife and produce kids to carry those miserable genes into the future.

Well that would add a whole new dimension to the Roe effect, wouldn't it? (I'm only kidding, I promise.)


Altruism is not a moral or religious ideal, no matter what some people might tell you. It is an essential, biological part of who we are as a species.

Hear, hear. But, as Nye likes to say, there's more. The abortion debate reveals that the extent of that altruistic tendency varies from person to person. Some extend it to "all of humankind," including the preborn, while others experience altruism toward a more limited age range. That raises a fascinating question: could there be a genetic component to where we stand on abortion? And if there is, what position is our current environment selecting for?

Undeniable doesn't go into that, but it explores a vast array of equally interesting questions. So let me conclude by saying that I don't want to be too hard on Nye. He's a childhood hero of mine, and despite the above criticisms, I really did enjoy Undeniable and I recommend it. In fact, it's hard for me to pick a favorite part. (The chapter explaining that racism has no basis in legitimate biological science probably wins.) The misguided abortion tangent is unfortunate, but within the context, that's really all it is: a tangent.

Undeniable: Evolution and the Science of Creation, Bill Nye and Corey S. Powell (2014).
Posted by secularprolife.org at 7:28 AM