It's not about who matters more

Everyday Feminism recently published a comic on the "32 types of anti-feminists," with each type getting a panel. Some of them are pretty funny and sadly accurate.

And then there's this straw man: 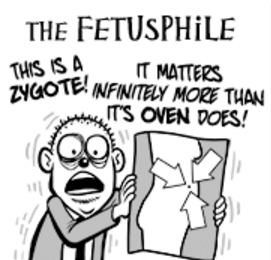 Okay, let's begin with appearances. What's up with his eyes? And his hair? And his nose? And the nervous shaking? He looks drunk or high! I hesitate to suggest that there's such a thing as a "typical pro-lifer," but it definitely wouldn't be that guy.

An intellectually honest illustrator can certainly do better than depicting a nascent human life as a speck. Most abortions take place in the latter part of the first trimester (8-12 weeks). Here's a more realistic depiction (via BabyCenter.com, which strangely enough supports abortion): Before I go on to the words uttered by our inebriated caricature friend, let me tell you a story.

Clarence, a man in his early 50s, lived in Florida. He was often unemployed and had only an eighth-grade education. He had married four times, had six children removed from his care by social services, and lived his life in poverty. In 1961, Clarence was accused of stealing $55 and a few bottles of beer from a pool hall and was arrested.

He had no money to pay an attorney, but since the charges were not capital, the court declined to appoint a lawyer to defend him. He conducted his own defense, failed, and began a five-year prison sentence. From prison, Clarence sued the director of the Florida Division of Corrections, claiming that he had violated Clarence's rights under the Sixth Amendment of the U.S. Constitution.

The Supreme Court considered the matter. If the Court had begun with the question, "Who matters more?", poor Clarence would have had a very hard time proving that he was more important than a government official. Thankfully, that is not how the law works.

Clarence is Clarence Earl Gideon, and the Supreme Court case is Gideon vs. Wainright—the landmark ruling in Clarence's favor that granted all criminal defendants the right to court-appointed counsel.

That does not mean that children are "infinitely more important" than their mothers.* It only means that children are in a vulnerable position that demands protection of their rights. In much the same way that opponents of feminism wrongly characterize feminism as putting women above men, pro-choice feminists wrongly characterize us as putting unborn babies above women.

Mother and child are equal. We will continue working until the law recognizes this truth.


* In my own experience, pro-lifers tend to hold mothers in high esteem. We certainly never call them "ovens."
Posted by secularprolife.org at 7:20 AM