Abortion in "Why Women Shouldn't Marry" 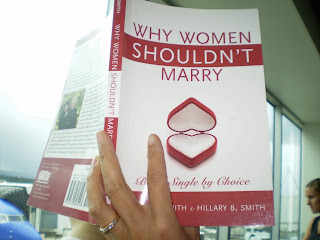 I recently re-read the wonderful book Why Women Shouldn't Marry: Being Single by Choice, by Cynthia S. Smith and her daughter Hillary B. Smith. (It was originally published by Cynthia alone in 1988; the second edition, to which daughter Hillary contributed, came out in 2008.) The book is not against all marriages per se, but urges women not to marry just because that's what's expected of them, because they're lonely, because their friends are all getting married, etc. Their point is that it's much better to remain single than to be stuck in a marriage with the wrong person. The book is framed by interviews with women who are single, divorced, living with a long-term boyfriend, and various other scenarios.

The authors write from an expressly feminist position, and while they don't discuss the morality of abortion, they drop numerous hints that they're pro-choice. So it's interesting to note that in the few cases that abortion comes up explicitly in their interviews, the role it plays in the interviewees' lives is anything but empowering.

The first (and most positive) mention of abortion comes in an interview with Vera, a single woman whose father committed suicide when she was young. This event convinced her that men "are not trustworthy, they are not dependable. ...Vera was drawn to having affairs with married men because in doing so, she was only confirming her lack of respect for all men. In her view, their willingness to break nuptial vows only proved how untrustworthy, weak, and immoral they were." While I find this reaction understandable from a psychological perspective, it certainly isn't healthy. The authors emphasize that Vera is "strong" and "honest," and I'm sure she is. But most of us can agree that deliberately seeking out married men is not acceptable behavior, and suggests a disregard for others. I wouldn't expect someone with that personality to regret her abortion, and indeed she doesn't:


All of Vera's relatives had multiple marriages with much unpleasantness involved. Eight cousins had produced only a total of two kids among them. She herself loved children—her career involved working with them—but she never wanted to have any. After speaking for more than two hours, she casually mentioned that she had an abortion when she was twenty-two, and of all the decisions she had made in her life, this was one she never for a second regretted.

Next up is Paula, an attorney who was happily single until she hit 30 and suddenly felt that she had to find a husband; it was now or never. "Paula panicked and became an absolute neurotic on the subject until her friends became disgusted with both her conversation and behavior." She began dating Arthur, a mediocre man she met through a personals ad.


Not only was Paula hysterical about impending spinsterhood, she was also fearful of infertility. "How do I know I can ever have babies?" she wailed to her friends. So she decided to test her childbearing ability by not using contraception and then found herself in the mixed-emotional state of pregnancy. She was glad that she could conceive, but unwilling to concede to a marriage with Arthur. So she told him nothing and had an abortion.

The authors obviously disapprove of Paula. This is a cautionary tale, not a feminist model. Still, I was shocked that they included it. The idea that a woman might get pregnant just to see if she can, and then abort, sounds like an insane anti-abortion fable until you read it in a feminist tome. So much for all women treating abortion with the gravity and seriousness it deserves. (Paula goes on to marry Arthur, and we never find out if she tells him about their dead child.)

Gloria manipulated Don into moving in with her, and about a year later, issued an ultimatum: marry me, or I'm moving to San Francisco for a new job. "She had received the job offer months before, but held off telling him in order to force him to make a fast, now-or-never decision." He reluctantly chose to marry her.


For two years, things were great, and Don began to congratulate himself that he had made the right decision. They traveled, went to the theater, opera, ballet—all Don's interests. Then one evening, Gloria hit him with the bombshell.

His face turned stony. "Oh no, we're not. I told you I never wanted kids."

He had. But totally confident in her manipulative talents, Gloria felt she would change his mind when the time was ripe. The debate went on for days, but he was adamant.

"Either you have an abortion, or I'm out of here," he said with such utter finality that she finally realized she had hit something she had never before encountered—an impenetrable stone wall ...

Many women would not have yielded, but Gloria had such confidence in her ability to convince anyone that she felt perhaps it was only a matter of poor timing. She would give in now, but come back in a year after giving him months to contemplate the guilt she would make him suffer. He took her to the doctor, and she had the abortion.

The following year, she once again became pregnant. But this time, she was prepared.

"I'm pregnant. I'm going to have a baby—your baby. I'm getting too old to expect this to happen again. I will not give up this child."

Again he refused to budge. No children. No way. This time she was prepared with a new tactic.

"I'll make you a deal. Why not wait until the baby is born, and after you've seen him or her, if you still feel you don't want to be a father, the baby and I will leave, and you'll never have to see us again."

He looked at her grimly. "I'm on to your manipulating techniques, Gloria. You assume I'll fall in love with the baby at first sight and get hooked. But you're wrong. Decide now—it will be me or your child."

She did not believe him. He drove her to the hospital for the birth and brought her and the baby home. When she got there, she found he had removed all his belongings. He dropped her off and left immediately. The divorce papers followed.


Posted by secularprolife.org at 7:26 AM