Next Steps for the Pro-Life Feminist Movement 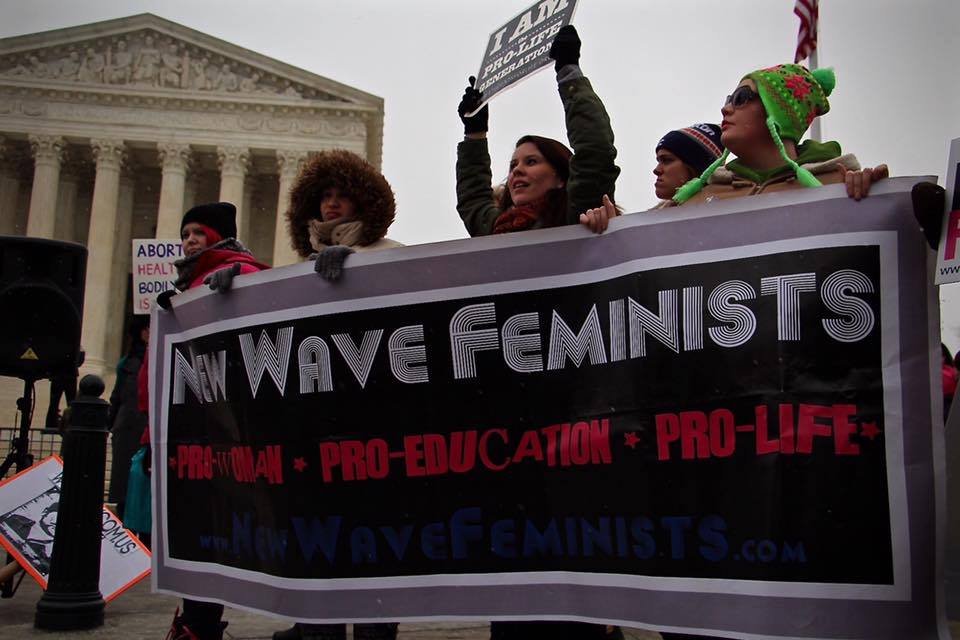 [Today's post is co-authored by Acyutananda and Kelsey Hazzard.]

The idea that legal abortion is a symptom of and reinforces a patriarchal, misogynistic social system is not new. In our awareness, it goes back at least to the founders of Feminists for Life. However, there has been a flowering just recently of fresh thinking on this theme. This development is highly encouraging.

First, the basics of the view that legal abortion is patriarchal and misogynistic:

The act of abortion itself, if done without compelling reason, is unjust treatment of the unborn. In a society that condones injustice, everyone in the society is diminished – men and women. That act is particularly harmful to the woman. It treats a fundamental female function as a disease that has to be cured surgically in order for the woman to be more like a man. When pregnant women feel they must resort to abortion for the sake of career goals, pregnant women’s genuine contributions to society are deemed insufficient to win society’s rewards, without their first employing violence against the weak. Abortion pits the woman against her child in an unequal contest. Either she must willfully deny the humanity of her child—an increasingly difficult fiction to maintain in the era of modern technology—or consciously recognize that her child is human and alive just like her, and settle their conflicting interests through might makes right. Both possibilities place a psychological burden on the woman alone.

When abortion is legal, and support for pregnancy, birthing, and child nurture is absent, the disadvantages of undertaking those things on one’s own push the woman onto a course that is harmful to her. The blessings of legal abortion that advocates tout for women are not a mere myth. Certainly abortion has helped some women in some ways. But the price paid has been too high (not to mention the price paid by all the babies – but that is a different subject).

Meanwhile, while many men are wonderful fathers and are happy to devote time, energy, and money to their children out of love, these positive tendencies have not become a strong social norm on the level of maternal care.  Our male-dominated society finds it advantageous to make such activities expected from women, but merely optional for men.  Very often men would like to obviate even the possibility of such demands on them.  As Frederica Mathewes-Green said, “once abortion becomes available, it becomes the most attractive option for everyone around the pregnant woman.”

If a child is conceived and is unwanted by the father, but its birth seems unavoidable because abortion is illegal, the father may feel morally obligated to help. But if abortion is legal, the father’s attitude is likely to be “She chose to have that child against my will. I will only do the bare minimum required by child support laws.”

When abortion is legal and moreover is promoted as “a responsible decision,” “the best thing for you,” or “waiting till you’re ready,” all the abortions that will naturally result become an escape valve: the pressure on men to support womanhood is relieved. Thus legal abortion is both a symptom of, and reinforces, a patriarchal, misogynistic social system.

This is the basic idea. We are aware of numerous articles and statements on the topic that have come out in the last six months, each of which has brought out some part or parts of this thesis.*  We write to elaborate on two issues that will arise as we work to change our society in the pro-life feminist mold.

First, pregnancy and child-rearing requires time, energy, and money.Historically, these costs have been borne by mothers. (They have made big money sacrifices in terms of missed earnings, even when the children’s upkeep was directly borne by the fathers.) This has allowed fathers to invest more time and energy profitably, in the workplace, than mothers can – thus controlling the purse strings over whatever earnings do not go for minimum family upkeep, and winning all the other rewards of a career. In developed societies, men have come to recognize society’s need for women’s contributions in politics, science, art, entertainment, sports and every sphere. But promoting female equality on this front will require people who are not mothers to give up some time, energy, and money from the career areas of their lives to share the load. And if children are unplanned and are not to be aborted, this will mean that those who are not pregnant (which includes all men) will have to give up time, energy, and money to share the load of children whom they did not want and even their mothers did not want.

Obviously, this won’t be popular among those who have traditionally enjoyed the privilege of focusing entirely on careers unfettered by children.  Confronting their objections will require a broader attitude shift, recognizing that no man (or woman!) is an island. Each individual’s thriving depends on the thriving of our societies and indeed of the whole species. Men depend on society, and society depends on the unique ability of women to host the origin and development of new life. The full value of this uniquely female contribution cannot be understood as long as the calculus is a purely materialistic one. For the full value of the ability to host the development of new life to be understood, the value of life itself, and the harm done to society’s collective mind when innocent life is destroyed, must be understood. Thus women’s true equality, including the equality of women with unplanned pregnancies, requires a deep sensitivity to the value of life and the damage done to us all when already-existing life is devalued.

Second, if abortions become rare, and meanwhile birthing and child-rearing are so well-supported as to have no downside for the adults involved, the birth rate is bound to increase.  In most cases, that will be welcome news; many developed countries are experiencing below-replacement birth rates.  However, it would be irresponsible for the pro-life movement to cultivate a “sure, anybody can do it” attitude toward conception and parenthood—particularly when it comes to teenagers, who even with all the support in the world may not be emotionally mature enough to provide a secure home for a child. Traditionally, efforts to encourage teens to abstain from sex or use contraception have emphasized the hardships of motherhood. What happens when motherhood is less of a hardship?

Here society must find a fine line. Society is right to discourage unplanned pregnancies, through education, before they occur. But after they occur, it is wrong to promote or allow conditions that are punitive either in intent or in effect. If society does not support unplanned pregnancy and unplanned motherhood and unplanned childhood once it occurs, then (since these are problems that can occur for any woman or any child and thus are problems of the society – yet are not problems that directly confront men), society discriminates against women and against unplanned children. An entirely new approach is needed, and to date, the pro-life feminist movement has not adequately addressed the specifics of this educational shift.  We need to develop a curriculum that encourages the planning of pregnancies, while neither the curriculum nor social circumstances themselves will shame or punish parents or children where the pregnancy is unplanned.


* Recent items include: When Abortion Suddenly Stopped Making Sense, by Frederica Mathews-Green; How I left the pro-choice movement and found true liberation, Abortion is a symptom, not a solution, I am equal, not the same, and Abortion is not the price of my success. #NoReliance (all from this blog); Our Current Abortion Law as a Product of Men, by Charles Camosy; Former Cosmopolitan Reporter Exposes the Propaganda Behind the Sexual Revolution and Women’s Movement by Alex Swoyer; I'm a feminist and I'm against abortion by Erika Bachiochi; and The March for Life's New Message: "Pro-Life Is Pro-Woman" by Robin Marty

Posted by secularprolife.org at 6:51 AM