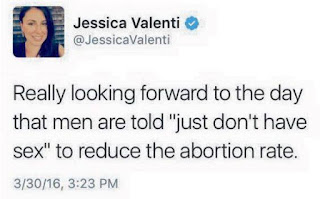 Well, Jessica, that day has arrived. SPL has never been an abstinence-only organization, but we are totally comfortable saying that men who are unprepared to deal with fatherhood should not have sex.

Contraception is, of course, also an option. If you are not looking to become a father at the moment, but are a decent enough human being to step up to the plate on the 1% chance you do conceive, and you've had that conversation with your partner, then very well.

But if you're the sort of scumbag who would demand an abortion from your partner in the event of an unplanned pregnancy, you have a very important role to play in reducing the abortion rate: just don't have sex.