SPL at the Californians For Life Summit 2016

This weekend, I had the fantastic opportunity to once again join pro-life leaders from all over my state for the Californians For Life Summit 2016! It was held in sunny (and very hot for this San Francisco girl) Pasadena. The summit is held every summer in various locations, but this year was the first year it was open to the public, so we can post about it!

While I am primarily a representative of SPL, I am also the president of Pro-Life Future San Francisco, so the event coordinator, Wynette Sills, strategically placed me at a table between Pro-Life Future Orange County and our pro-life ally Life Matters Journal!

Last year, when I attended, I was part of the cultural outreach group, along with the outstanding Pastor Walter Hoye and his wife Lori Hoye from the Issues4life Foundation. This year we were offered an opportunity to present again. My presentation addressed the mission of Secular Pro-Life, as well as the history of secularists within the pro-life movement. I called upon the group to embrace a more inclusive approach in their advocacy. The moment I said “I am a pro-life atheist” I had the attention of the entire room. It was packed, and it was kind of amazing. 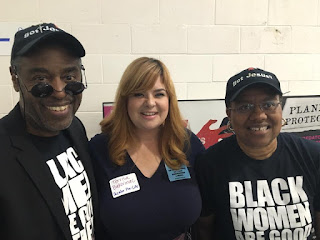 Yours truly with the Hoyes!


After that, each organization represented had an opportunity to introduce their cause. I used that time to discuss the #HelloHyde campaign, a social media campaign to combat opponents of the lifesaving Hyde Amendment! This was met with tons of applause.


Finally, I was invited to participate in a panel featuring “Ordinary People Making an Extraordinary Effort For Life”. The panel consisted of all young pro-life leaders and it was so inspiring hearing their heroic stories and efforts made in the name of life. It was an honor to be featured. I spent the time I was given to discuss the role non-traditional pro-lifers play when swaying people who maybe have never thought too much about abortion. I also stressed the importance of political, sexual, and racial diversity. 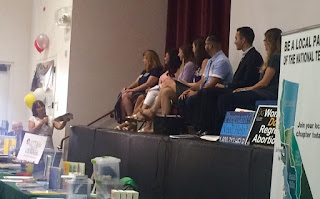 
We even had a couple SPL fans there! One in particular really made my day saying she has followed us for some time and recognized me from our posts! I mean, guys, I don’t do it for the fame, but that was so cool!


So many thanked us for being there. In the end when the attendees joined hands to pray, one man offered to stand with me during the prayer and he didn’t pray out loud with the group. It felt almost as if he were standing in solidarity with us.

As I left the building, people continued to reach out and offer their support for our cause. I look forward to working with these brave pro-life people in the coming year to end abortion in California.