ACTION ITEM: Submit a comment on the proposed HHS rule here. Comments are due before midnight on October 7, 2016. 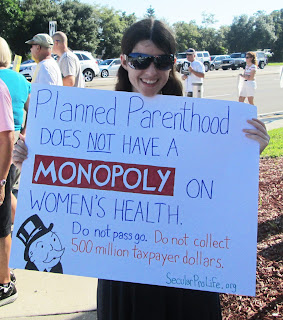 The federal Department of Health and Human Services released a proposed rule that is quite obviously intended to siphon Title X funds to Planned Parenthood.

The rule would prohibit states from prioritizing funding for its own health departments or federally qualified health centers over Planned Parenthood. The HHS writes: "Some states have employed a tiered approach to compete or distribute Title X funds, whereby entities such as comprehensive primary care providers, state health departments, or community health centers receive a preference in the distribution of Title X funds." This, HHS believes, is a problem, because "experienced providers that have historically served large numbers of patients in major cities or geographic areas have been eliminated from participation in the Title X program."

HHS argues that "On average, an individual FQHC serves 330 contraceptive clients per year and a health department serves 750, as compared to specific family planning providers that on average serve 3,000 contraceptive clients per year. To exclude providers that serve large numbers of clients in need of publicly funded services limits access for patients who need these services." What this argument misses is that those "specific family planning providers" (again, please just say Planned Parenthood, we're not stupid) are wildly outnumbered by FQHCs and health departments. With so many more locations, FQHCs and health departments are in a better position to help a greater number of people access contraception. But they've barely gotten an opportunity to show it, because Planned Parenthood has historically gotten the money, and keeps suing to claim entitlement to FQHC and health department family planning funds.


Under the proposed rule, a tiering structure—described above—would not be allowable unless it could be shown that the top tier provider (e.g., community health center or other provider type) more effectively delivered Title X services than a lower tier provider. In addition, a preference for particular subspecialty providers would have to be justified by showing that they more effectively deliver Title X services. Furthermore, actions that favor 'comprehensive providers' would require justification that those providers are at least as effective as other subrecipients applying for funds. The proposed rule does not limit all types of providers from competing for subrecipient funds, but delimits the criteria by which a project recipient can allocate those funds based on the objectives in Title X.

(emphasis added). Note that this requires a judgment about who is already serving the most people, not a judgment of whether a higher-tier provider could effectively serve Planned Parenthood's former clientele if given the funding to do so.

A state legislature would not be permitted to consider, for instance, a long-term goal of eliminating Planned Parenthood's dominance of women's health care with the aim of ensuring that low-income women can feel comfortable receiving care regardless of their political stance on abortion. Notably, low-income people are less "pro-choice" than their wealthy counterparts. Planned Parenthood has become increasing political, and plans to spend a whopping $30 million on the upcoming election.

Legislatures would also be prohibited from considering the experiences of other states that Planned Parenthood has defrauded. In fact, it sounds like they couldn't even consider Planned Parenthood Medicaid fraud in their own state, because Texas is one such state, and HHS specifically calls out Texas' tiered system as an example of what they are trying to ban. That's insane.

The rule is still just a proposal, but we need an overwhelming demonstration of opposition if we're to have any hope of stopping it. Rep. Diane Black put it well when she said: "We must use the full force of Congress and the grassroots strength of the national pro-life movement to defeat this absurd rule and prevent the Obama Administration from acting unilaterally to carry out political favors and prop up a scandal-ridden abortion provider."

Please submit a public comment on the proposed HHS rule here. Comments are due before midnight on October 7, 2016.


As the "Litigation" section makes clear, the proposed rule is an obvious attempt to give Planned Parenthood preferred access to Title X funds. This is terribly misguided.

Second, the proposed rule would make it unlawful for a state legislature to consider the potential health benefits, in the long term, of ensuring that a politically active entity is not the dominant provider of women's health care in the state. Planned Parenthood's stance in favor of unrestricted abortion is widely known, and is borne out by multi-million-dollar election expenditures. But the low-income individuals Title X is intended to serve are considerably less "pro-choice" than their wealthy counterparts; in fact, it's a 17-point difference. Gallup 2013, http://bit.ly/2c3QURF (58% of people with a household income of $75,000+ identified themselves as "pro-choice," compared to 41% of people with a household income of less than $30,000). By eliminating states' ability to prioritize funding for entities other than Planned Parenthood, pro-life low-income women could be forced to either receive care from a provider they strongly distrust, or forgo care entirely.

Although I am no longer low-income, I can assure you that during the time I was a student and unemployed, I would not have been caught dead walking into a Planned Parenthood for my gynecological needs. I was fortunate to have adequate care from other sources. All women deserve that, and FQHCs and health departments are in the best position to provide care to women regardless of where they fall on the political spectrum.

For all of these reasons, I strongly oppose the adoption of this proposed rule.