Your president, Kelsey Hazzard, here. On Saturday, Secular Pro-Life participated in the Walk for Life - West Coast for the seventh consecutive year. But for me, it was the first year. Typically, I am busy at the March for Life in D.C., and other SPL leaders take care of things in San Francisco. But this year, the west coast and east coast events are held a week apart, so I was finally able to make it out to California.

As usual, we teamed up with the Life Matters Journal. This year we also had the San Francisco chapter of Pro-Life Future, led by SPL admin Terrisa Bukovinac.

The walk was amazing. A picture's worth a thousand words, and I encourage you to view our photo album here. A few of my favorites follow: 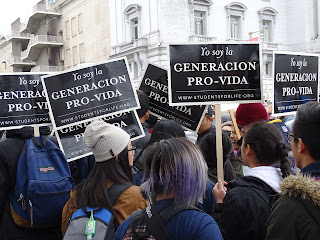 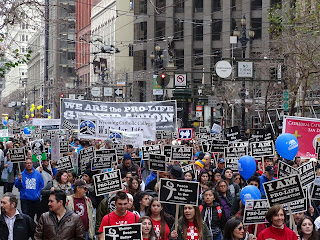 What the photos don't convey is that Spanish music filled the air, complete with guitars and drums that people played while marching, which was pretty cool.

I'm told that there were fewer counter-protesters this year. In particular, Stop Patriarchy and its distinctive orange signs were absent. But rest assured, I was flipped the bird plenty of times.

Our next stop is Washington, D.C. You'll find our full itinerary here.

Posted by secularprolife.org at 10:49 AM