A crazy week in Washington, D.C.

Your president, Kelsey Hazzard, here. I'm in Washington, D.C. and staying with my friend Lauren Handy, sidewalk counselor extraordinaire. She's a Christian, but takes a totally secular approach to sidewalk counseling. As she describes it, she's doing crisis intervention—if you were rescuing people from a burning building, you wouldn't pause to proselytize, so why on earth would anyone do such a thing when a mom is about to have an abortion? She gets it. She's written for this blog before, and I was excited to shadow her and learn some life-saving skills.

And boy, did we pack a lot of activity into one day yesterday! First stop was an abortion center in Bethesda, where on an average morning, at least 5 to 10 women have abortion appointments... 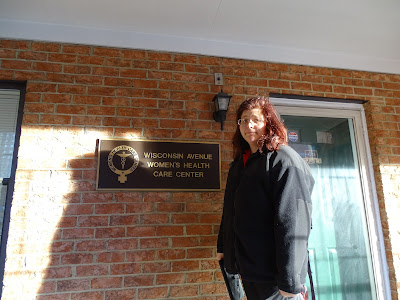 ...but no one came! We're not clear on what happened or why; an abortion worker did arrive and turn the lights on, but the abortionist never showed, and there were no clients. Lauren says I must have been a good luck charm. I'll take it!

Next, we headed over to the Capitol for a press conference on the federal heartbeat bill. Secular Pro-Life hasn't taken an official position on this legislation, but I thought it would be wise to at least get informed about it and take some pictures. 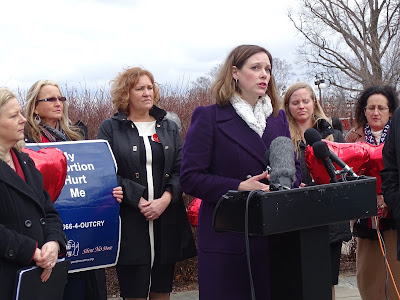 Toward the end of the press conference, a pro-choice woman passed by and struck up a conversation with me. She was upset that no women of color spoke at the presser. I agreed that women of color should have been included, and shared some photos of the diverse pro-lifers I met in San Francisco last weekend. We wound up having a wide-ranging discussion and finding a lot of common ground, including the desire for women to have as many non-violent reproductive choices as humanly possible (and also some totally non-abortion-related things; she's an entrepreneur with a career in solar energy, which is pretty cool). I gave her my email so we can follow up.

That conversation lasted so long that Lauren had to leave in the middle of it for lunch. In my attempt to meet up with Lauren later, I proceeded to get hopelessly lost. Finally we reunited and ate in a Congressional cafeteria, where the TVs displayed the House debate on the No Taxpayer Funding of Abortion Act (which would make the Hyde Amendment permanent). 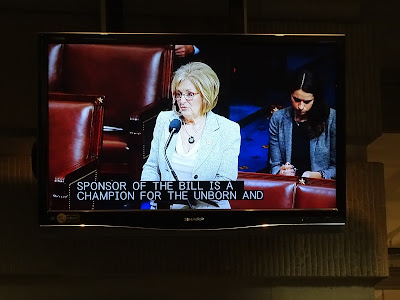 I about flipped when I saw this: 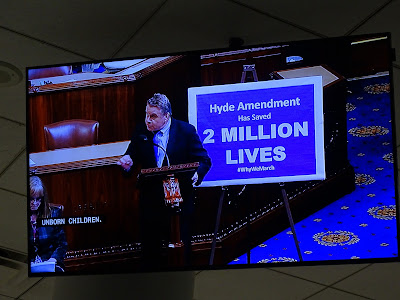 That 2 million statistic comes from a Charlotte Lozier Institute report which they produced at the request of our #HelloHyde campaign last September. Not a bad ripple effect!

Next, we met up with a larger pro-life group and watched Rep. Marsha Blackburn receive an award for her right-to-life advocacy. That larger group included some 20-somethings from Created Equal, whom I had never met. I wound up networking with them for the remainder of the afternoon, which included a nice visit to the Museum of American History.


So that was yesterday! Today should be slightly more relaxed. Here's where you'll find Secular Pro-Life for the remainder of this week:
This time of year is a whirlwind for us. We have no paid staff and rely entirely on volunteers to maximize our participation in Roe anniversary memorial events. We're so grateful to everyone who came out to San Francisco last weekend, and to everyone who's joining us in D.C. this weekend.

If you aren't able to help out in person, we understand. Please consider making a donation to our work. We want to build on the energy of this week to make 2017 our best year yet!

Posted by secularprolife.org at 9:04 AM