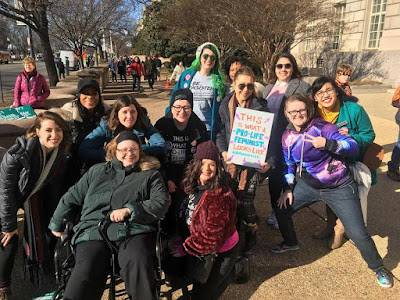 It's been a hectic few days as we joined hundreds of thousands of pro-life advocates from all over the country. Secular Pro-Life was ably represented by three atheist women: yours truly (Kelsey Hazzard), co-admin Terrisa Bukovinac, and Sarah Terzo of ClinicQuotes.

I arrived in D.C. on Thursday and stopped by the March for Life Expo; Secular Pro-Life did not get a booth this year, but many of our friends did. I also encountered some organizations I wasn't previously familiar with, that are doing awesome work. I may profile some of them on the blog in the coming weeks.

That evening, Terrisa (still on west coast time) convinced me to hang out at the pro-life movement's signature Irish establishment until about 2:00 a.m. I'm so glad she did, because I wound up having some conversations that I believe will be very beneficial to an upcoming SPL project. I'm not at liberty to go into any more detail than that for now. Suffice to say that there is a huge value in seeing people face-to-face, rather than just online.

There's been some debate within pro-life circles about the March for Life atmosphere. Critics say it's taken on too celebratory a tone; this is a memorial for 60 million lives lost, not a party. I certainly agree that we must keep the victims of abortion at the forefront. On the other hand, the March for Life is the only opportunity many of us have to re-energize and be inspired by what our fellow activists are doing. A sense of camaraderie, and with it joy, is only natural. And sometimes, potentially life-saving conversations can happen at a bar in the wee hours of the morning.

Friday morning, I said a brief hello to the Created Equal crew, who were setting up a Jumbotron display showing victims of abortion. I'm not interested in a graphic images debate, but I do think there is a time and a place for them, and I found Created Equal's approach to be very moving. (Unfortunately, I found some others' use of abortion imagery to be less so, even bordering on cartoonish. It's a delicate balance.)

Then I made my way to Constitution Ave, where Rehumanize International hosted a pre-March meetup. I was the first speaker, and you can watch the video here. People can't seem to agree whether it was a poem or a rap; what do you think? Terrisa and Sarah also addressed the gathering, as did Krista Corbello, Ruben Verastigui, John Whitehead, Ifeoma Anunkor, and Aimee Murphy.

Sadly, I didn't get many March for Life photos this year, due to the fact that I had limited cell phone battery and I had stupidly left my nice camera in a taxi. But Rehumanize has some good ones, and you absolutely must see Students for Life of America's time lapse video.

The biggest difference between this year's March and past Marches? I only counted three counter-protesters at the Supreme Court. Usually there are at least a couple dozen. Your guess as to the reasons for the drop is as good as mine.

That evening, Rehumanize International and Secular Pro-Life jointly hosted a karaoke fundraiser. It was a great success and we hope to do it again next year!

On Saturday, we went to Georgetown University for the Cardinal O'Connor Conference on Life; the theme was "(Ir)religiously Pro-Life: The Future of the Movement in a Secular World." I spent most of the day tabling, but I did get to hear keynote speaker Lila Rose, and I had the great honor of participating in the event's closing panel. You can watch part of it on facebook, up until Terrisa's phone died; official university footage should become available in a few weeks.

If you missed us in D.C., don't fret; you can catch us in San Francisco this weekend!