I don’t think any man is prepared for hearing that a pregnancy he helped create may be the cause of death for the mother of his child. I know the father of my child wasn’t prepared to hear that, but he did nonetheless. In his words: "You hear people say a person could die having a baby, but we don’t really think about what that looks like. It’s so different than say a person having cancer because we see that and know what it looks like. People just don’t talk about what it’s like when you’re told you’re gonna die having a baby." I wanted to present our story from his perspective because men are often overlooked in maternal issues.

Mine and Jake's relationship began in July 2016. We hit it off immediately and felt there was something solid about the connection we had. Jake had no children and I had 3. I told him immediately that I didn't want more kids and in fact wasn't able medically to become pregnant. He said he was okay with loving the children I had, so we continued our budding romance. However, in August 2016 we discovered the doctors had been wrong and that I could become pregnant because I was definitely pregnant.

We were in disbelief and although he was shocked and scared, he handled it with grace. He was excited despite the fact we'd only been together a month. Unfortunately we both knew that with my medical history, our pregnancy would be difficult and statistically the odds were in favor of miscarriage. I'd had a uterine ablation a few years back and that makes conceiving and maintaining a pregnancy exceptionally difficult. We miscarried at 6 weeks... but at 12 weeks found out we were still pregnant. We had lost a twin.

It was then that my doctor presented us with the scary statistics of my pregnancy and that if I continued with it, my fatality was the overwhelming outcome. We chose to continue the pregnancy. Jake was angry when we were told to terminate, and scared for the implications of not terminating, but he supported my decision.

At 26 weeks I had a massive hemorrhage and was admitted to the hospital. We lived over an hour away from the hospital so he and I moved into a hospital room together. He got up each day, went to work and came "home" to me and did everything in his power to keep our lives normal. I can't imagine how difficult those days were for him but he says they weren't hard, it was just our life. It's funny how you can adjust to anything as long as you're with the one you love.

We had to stay in the hospital until my delivery, which was set for 33 weeks. The days leading up to my delivery were hard for Jake. This was his first and only child, but due to my medical issues I'd have to be under general anesthesia for delivery which meant he couldn't be in the room when our daughter was born. He would have to wait until she was stabilized to see her because of her prematurity, and he'd have to meet her without me because I'd still be in surgery.

On March 8, we were scheduled for delivery. Both of us were scared and anxious. Our main concern was would our daughter be okay? Would she have complications? It's so hard to be excited when your whole pregnancy has been doom and gloom. But we held fast to the belief that our daughter was a fighter and that she would be okay. 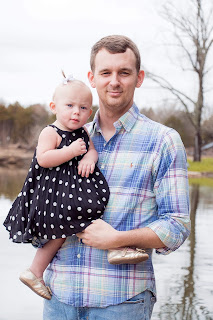 At 1:45 that day, Sadie Kayte Holliday entered the world weighing 5 lbs and was 17 inches long. She was every bit the fighter we knew she would be and came off intubation within the first hour of her birth. Jake only knew she had been born via a phone call to the waiting room from a nurse. He didn't get to meet her for several hours. It was only upon him getting to meet our daughter that he learned things were seriously wrong with me.

I was still in surgery, he was told. He knew I should have been out by now and that something was wrong. Later that evening my doctors met with Jake and my family and told them they'd done all they could do but it wasn't enough. I had bled out several times during surgery and they couldn't find or stop the bleeding. My body had had enough, so they packed my incision and stapled me up and put me on life support until they could come up with a new plan.

Jake finally got to see me in ICU around 11pm that night. He says seeing me like that was the hardest part. He held my hand, cried, and prayed for me to live. He thought about how life would be raising Sadie without me. He never left my side and slept with his head on my damaged body.

The next day I was operated on again. The doctors successfully found and fixed the arteries that had been damaged. I’ll never forget the look of relief on Jake's face or our hug through his tears when I saw him after surgery in ICU.

We are about to celebrate our daughter's first birthday. We are now married. Our experience shaped our relationship in so many ways. We grew together and became so strong. We could have so easily said we haven't been together long enough to have a baby, or the doctors know best, but we didn't. We chose to fight together instead of doing what was convenient, and I am grateful for that every day.

[Today's guest post by Amanda Solomon is part of our paid blogging program. She is Vice President of Life Defenders.]

Posted by secularprolife.org at 7:11 AM

Email ThisBlogThis!Share to TwitterShare to FacebookShare to Pinterest
Labels: her story, infertility & pregnancy loss, life of the mother