[This post contains photographs of infants with serious genetic abnormalities.]

Pro-life people often say:
Sometimes pro-choice people point to molar pregnancies, or hydatidiform moles (HMs), to undermine the above claims. HMs are products of human sexual intercourse. They are genetically distinct from the woman. Yet to the extent we’re aware of molar pregnancies we nearly always destroy them.

This situation demonstrates how messy biology can be. But it doesn’t undermine the basic fact pro-life people are trying to establish: the human zygote is the first developmental stage of a human organism. Every human has his or her own life cycle, and the zygote is the beginning of a human life cycle. HMs don’t change that fact, and in this post I explain why not.

There are two types of HMs: complete and partial.


1. Complete hydatidiform moles (CHM)
A CHM exists when the sperm fertilizes an egg that had no nuclear DNA. While it’s true this mole arises from fertilization, it is not true that the mole is a human organism. The vast majority of human organisms have two sets of DNA: one set of 23 chromosomes from the father and one from the mother. A CHM has only the sperm’s DNA. Here is a relevant excerpt from Larsen’s Human Embryology (Schoenwolf, Bleyl, Brauer, & Francis-West, 5th Edition):

Similarly, here is the definition of a hydatidiform mole from the 11th edition of Developmental Biology (Gilbert & Barresi):

A CHM involves no embryonic growth. As Larsen’s explains, “the fetus is entirely missing.” Moreover CHMs have a high probability of becoming carcinogenic. We can and should terminate these pregnancies: they are very dangerous to the woman and they don’t even involve another human anyway. This situation is not ethically complicated. 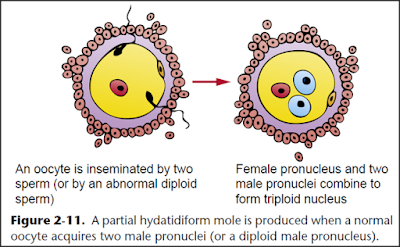 We typically have two copies of every chromosome. Three copies of a chromosome are called trisomies. For example, Down syndrome is called Trisomy 21 because it occurs when there is a third copy of the 21st chromosome. Even one extra chromosome is often fatal: fetuses with trisomies frequently miscarry. Even when they survive beyond birth, they have significant developmental challenges. With that in mind, it is really astounding that triploid human organisms (that is, humans with not just one extra chromosome but 23 extra chromosomes) ever make it to infancy. It’s very rare, but it has happened. Here are two examples, including photographs from the publications:


These human organisms have fatal genetic abnormalities, but they are humans nonetheless.