The true secular side of the Irish abortion debate 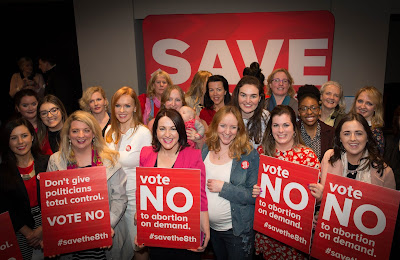 On the 25th of May this year, when Ireland paved the way for legalized abortion through the repeal of the Eighth Amendment, many Repealers claimed that this was a final severing of the Catholic Church’s control in Ireland and real liberation for Irish women. Such shockingly ignorant remarks show how little the Repealers know about the modern global pro-life community and just how secular this movement has actually become.

It is worth examining the comments of NARAL co-founder and abortionist turned pro-lifer Bernard Nathanson on how he helped legalize abortion in the USA, because in 2018, Ireland fell victim to the very same methods that Nathanson utilized fifty years ago.

Nathanson: “The First Key Tactic was to capture the media”.

Over the last number of years, this clearly has been used to great effect in Ireland. The whole media, every newspaper and the national TV and radio station, RTÉ, were all in favor of Repeal, with just a couple of “token” journalists, Breda O’Brien and David Quinn, speaking in favor of the 8th Amendment. This has been the way for some years in Ireland and it has proven very difficult to infiltrate this media freeze-out. In 2015, The Prolife Campaign ran a 33-1 campaign, where they studied the Irish media for two weeks and observed that within that time frame, 33 pro-choice articles appeared, while only one pro-life article was published. The online group, Hear Both Sides has also given a number of examples on how Irish national taxpayer-funded broadcaster RTÉ has repeatedly shown bias against pro-life opinions.

Various Irish actors such as Saoirse Ronan and Cillian Murphy willingly added to the lies and misinformation, creating a video to encourage Irish citizens to vote for Repeal and during which the actors actually pause for the “women who had died from the 8th Amendment”. Not one woman has ever died due to this amendment but the media did nothing to challenge this blatant and shameless lie. Other mistruths were willingly spread, such as pregnant women in Ireland being denied life-saving treatment during cancer and the threat of imprisonment of fourteen years for procuring an illegal abortion. What the media failed to state was that it was the pro-abortion political party, Fine Gael, the group now pushing for abortion up to birth in Ireland, who were the ones to introduce this ridiculous prison threat through their Protection of Life During Pregnancy 2013 Act. It worked nicely and was cited as one of the reasons why many Irish citizens voted to repeal the 8th.

However, the real ace card for the Repealers was Savita Halappanavar, whose tragic death by undiagnosed sepsis in 2012 was shamelessly exploited in the Irish and international media. The result has been that most Irish people are now utterly convinced that Savita died from being denied an abortion, when in fact, Irish law already allowed for an abortion to save the mother’s life. Abortion advocate OB-GYN Peter Boylan regularly stated in the media that women's lives were in danger due to the Eighth Amendment, in response to which five top Irish obstetricians wrote an open letter, calling on Boylan to retract these claims. Boylan also gave an interview to Irish magazine, Hotpress, where he blatantly lied that four women had died from the 8th, including Halappanavar. ‘Save the 8th’ campaigners explained how each of these women had actually died and ran a petition for Boylan to resign but the media unquestioningly ran with Boylan’s version.

Despite previously claiming to be pro-life, the vast majority of Irish politicians also jumped onboard the Repeal side, including the Irish Prime Minister, Taoiseach Leo Varadkar and Health Minister, Simon Harris. They used every opportunity to advance the Repeal side, participating in interviews where they were allowed to go unchallenged in their frequently outlandish remarks. Varadkar refused to debate the referendum in public, citing protocol, but that didn't stop him grinning regularly for the media while promoting the Repeal side and parroting vapid soundbites such as Hillary Clinton’s long-obsolete “safe, legal and rare”. Both men refused to meet with women who regretted their abortions and women whose children had been diagnosed with “fatal fetal anomalies” and went on to give birth to their children. These Irish politicians gave all their time and attention to women and abortion groups whose opinions tallied with their own and these were the only stories that the Irish media actively engaged in. I myself wrote to both Varadkar and Harris on a number of occasions and to date, neither has bothered to reply to me.

Nathanson: “The Second Key Tactic was to Play the Catholic Card”.

Even though Catholics kept a low profile in the Referendum, international media such as the Guardian cited Ireland as being “shrouded in shame”, even though such naiveté made it clear that none of these journalists had ever visited Ireland. The fact that 87% of 18 to 24-year-olds voted for Repeal demonstrated that the Catholic Church had not influenced them. Liam Neeson’s amalgamation with Amnesty (the “human rights” group who supports legalised prostitution and still hasn't returned illegal funds from George Soros) produced a ridiculous and outdated video, with eerie graveyards and crucifixes, insinuating (but never stating) that this is how [Catholic] Ireland looks and treats its womenfolk, due to the Eighth Amendment.

Irish GPs are going to be forced to participate in abortions or refer on women to other doctors, a violation of their right to conscientious objection; two-thirds don't want to engage in abortions. Even though the majority of Irish GPs don’t want to be involved in such procedures that are not a typical part of general practice, there is a presumption that this is due to religious reasons. This extreme opposition to pro-life doctors is very apparent in the vehemently pro-abortion newspaper, The Irish Times, where one journalist claimed that GPs who object to being involved in abortions are doing this “on personal religious grounds”. This muddled view is a sadly typical one amongst Irish journalists and indeed, in Ireland at large.

Nathanson: “The Third Key Tactic was the Denigration and Suppression of all Scientific Evidence that Life Begins at Conception”.

Fifty years of legalized abortion in the UK meant that the ‘Save the 8th’ campaigners had plenty of evidence to draw upon and stated these facts in their posters. Other posters stated correctly that abortion will be available in Ireland to six months for vague health reasons. Real-life experiences from nurses who had witnessed the horrors of legalized abortions in other countries were also cited. The Repealers panicked. First, they denied such details, “fact-checking” and tried to deny that 1 in 5 British pregnancies end in abortion, as miscarriages weren't included in these figures. They also tried to deny the fact that 90% of babies diagnosed with Down Syndrome are aborted in the UK. When the Repealers couldn't protest the facts and stats on the posters dotted around Ireland, they did what frightened people often do. They tried to destroy the evidence. During the campaign, thousands of ‘Save the 8th’ posters were torn down around Ireland.

Journal.ie, an online Irish media forum claiming to give a non-biased guide to the Eighth Amendment stated that: “There is little consensus of when life begins”, which is absolute bunkum, of course, but went unchallenged. Embarrassingly, retired OB-GYN Peter Boylan stated on Irish national TV that the preborn child in the womb is not fully formed at 12 weeks and was corrected by pro-life OB-GYN, Dr. John Monaghan who informed Boylan that if he didn't know that basic fact, he should go back to school. Astoundingly, instead of challenging Boylan’s lack of basic scientific knowledge, the Irish media actually rushed to defend him, referring to his “expertise”, as cited by pro-abortion Irish Times journalist, Fintan O’Toole. And Boylan’s reward for scientific ignorance and blatant lies on national Irish TV? He was promoted by Irish Health Minister, Simon Harris to be Ireland’s first Abortion Doctor in Chief, to help usher in abortion to Ireland.

So who really ran the secular debate in the Irish referendum?

It was very obvious that the pro-life ‘Save the 8th’ campaigners were the true secular ones: to their utter credit and mostly women-led, they called out the media for their prejudice; avoided religious references and representatives and used lots of scientific facts, stats, and logic to back up their arguments. On the other hand, on the 26th of May, when the referendum results were announced, the pro-choice Repealers danced in a ritualistic manner at Dublin Castle, while Varadkar, Harris and other pro-abortion Irish politicians stood on a platform like “tin gods”, lapping up the attention and waving to their cult-like followers.

It has become very clear that many Irish citizens are sadly out of date with the international pro-life movement (including Secular Pro-Life) and are completely unaware that globally, the future of the pro-life movement is “young, female, secular and feminist.” Many people in Ireland are still convinced that a lack of legal abortion is an intrinsic part of Catholicism and without its legalization, women aren't truly “free”. This is the real way that Ireland is behind the times. Tragically, more than fifty years after Bernard Nathanson’s admitted lies to help legalize abortion in the USA, the Irish fell for exactly the same old tricks.

[Today's guest post by Maria Horan is part of our paid blogging program.] 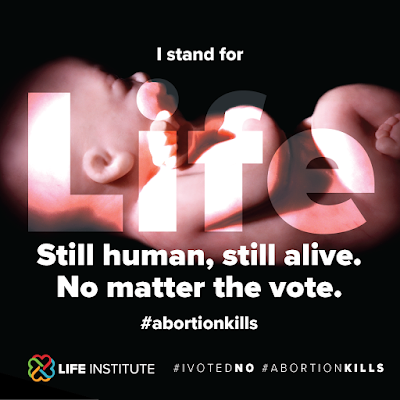