Despite conventional wisdom, there's zero quantifiable data to support the idea that all or even most late-term abortions are medically necessary.

Objections to the "medically necessary" definition.

We understand that many pro-life people object to characterizing some or all of these situations as "medically necessary abortions." Some people don't consider a procedure that destroys a fetus an "abortion" if the procedure is done to save the woman's life. Some don't believe there are any scenarios where a woman's life or health is better protected by late-term abortion than by induction of labor or c-section. Some view abortion due to fetal abnormalities as a type of involuntary euthanasia, not medically necessary to the woman and not clearly in the best interest of the fetus. Some especially object to calling abortions "medically necessary" for fetal abnormalities because not all such fetal abnormalities are life-threatening to the fetus (possibly the most controversial example being the very high rate of abortion when the fetus has Down syndrome).

SPL recognizes some relevant points here (scroll down to "Further Reading" for more thoughts on these subjects). But for this blog post, we leave all that aside. Here we're not debating whether and when abortion is justified for maternal health and life or for fetal abnormalities. We're demonstrating that even if you believe all of these reasons constitute medically necessary abortions, most late-term abortions are still not medically necessary.

In reality, most women seek 21+ week abortions for non-medical reasons, such as:

Here is a list of further resources, including data and studies, interviews of abortion providers and other pro-choice sources, and interviews of women who obtained non-medical late-term abortions.

1. More evidence that most late-term abortions are elective - Arizona state data over several years showed ~80% of 21+ week abortions were not for maternal or fetal health issues.

[The above link summarizes the AZ data, but go here to see exactly which Arizona reports and which tables in those reports we referenced to get this info.]


"A spokesman for Clinton’s campaign told us that she meant that many late-term abortions — not all or even most — are because of medical reasons. But that’s not what she said. Her statement left the impression that the majority, if not all, late-term abortions are medically necessary. The available evidence does not support that assertion."

3. Who seeks abortions at or after 20 weeks? Perspectives on Sexual and Reproductive Health, 2013.


"Data suggest that most women seeking later terminations are not doing so for reasons of fetal anomaly or life endangerment."

4. An answer to pro-choicers on Kermit Gosnell. Slate, January 24, 2011. Pro-choice author Will Saletan outlines quite a bit of research suggesting late-term abortions are often not for medical reasons (see parts 8 and 9 of his piece).

1. Fake News About Abortion in Virginia. The New York Times, February 1, 2019. Frances Kissling, president of the Center for Health, Ethics and Social Policy:


“Our talking point is, most of these procedures are on women who discover abnormalities late in the pregnancy,” Kissling said. “We don’t know if that is true.”


In the vast majority of cases, the procedure is performed on a healthy mother with a healthy fetus that is 20 weeks or more along, Mr. Fitzsimmons [Executive Director of the National Coalition of Abortion Providers] said. ''The abortion-rights folks know it, the anti-abortion folks know it, and so, probably, does everyone else."

3. Interview with Dr. Susan Robinson, One of the Last Four Doctors in America to Openly Provide Third-Trimester Abortions, The Hairpin, September 20, 2013. Dr. Robinson explains the women who seek third trimester abortions not for medical reasons, but because they didn't realize they were pregnant earlier:


They think they just got pregnant. They have no idea they’re in their 24th week. So they make an appointment for an abortion, and it takes a few weeks, and they have their ultrasound and find out that they’re at 27 weeks, which is too far for an abortion anywhere. So then what happens? They either give up or have a baby, or they go on the Internet and they find us.

4. Abortion is 'never, ever a casual decision,' The Irish Times, September 21, 2013. Dr. Shelly Sella explains why women come to her for third trimester abortions:

The women Sella treats fall into two categories: those who discover foetal abnormalities; and those with healthy, viable babies whose maternal circumstances mean they could not cope with the baby.

He doesn't share his clinic's statistics and rarely speaks of individual cases, but Hern has said he also performs late abortions for women who are not facing any grave medical outcome.

6. The truth about later abortions, according to someone who actually had one. ThinkProgress, February 2, 2019. A woman obtained a $12,000 non-medical abortion around the 5.5-6 month:


I wanted an abortion because my partner wasn’t supportive and I wanted to finish my studies. And if I didn’t have enough money for me or a place, how could I have a baby, you know? So sometimes it is for our future. It’s not the right time.

7. What It Was Like To Get A Later Abortion Teen Vogue, February 8, 2019. A woman obtained a non-medical third trimester abortion because she didn't learn she was pregnant until late in the second trimester and then struggled to find both a clinic that would perform such a late abortion and the $12,000 to cover the cost.


Despite living in Oregon, a state with one of the most progressive abortion laws in the nation, I encountered so many obstacles to accessing abortion just because of my situation [how far the pregnancy had already progressed].

8. What to Know About So-Called "Late-Term Abortion" Teen Vogue, February 12, 2019. A woman obtained a non-medical late second trimester abortion because she didn't find out she was pregnant until she was already in her second trimester.

“Ultimately I knew I just would have no financial stability, and I also knew, too, if I were to have a child I didn’t want, I would definitely drop out of college.” 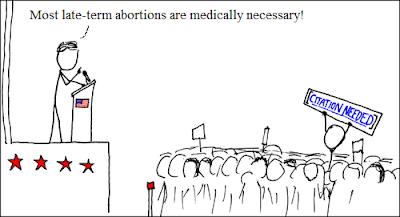 Unsubstantiated claims about medical necessity.
Note none of these articles includes links or even citations to any quantifiable evidence.

Objections to the "medically necessary" definition.
Late-term abortion to save a woman's life or protect her health.


Late-term abortion and ableism.
Posted by M at 8:05 AM