Recently a FB follower shared this post to our page:


The text reads, in part:

This is what an embryo at 6 weeks looks like. There is no real heart beat because it’s heart isn’t nearly complete - they’re heart “vibrations” (vibrations are caused my cellular activity where the heart WILL be. Meaning, yes, the title of the “heartbeat bill” is misleading, purposely). There is no brain, meaning no pain receptors. It does not feel pain. This is what you’re stripping women’s right away for. I, your sisters, your mothers, aunts, friends - we all have beating hearts and brains. Our lives are more important than this.

**Stop listening to pro life talking heads that use purposely emotional language to manipulate your view. They are not doctors or scientists.**

•This is not a “baby”. They use pictures of 6 month old babies to pull on your heart strings. This is an embryo. This is not “10 fingers, 10 toes” babbling cooing baby they’re trying to get you to imagine.


The post is certainly right that this image is not of a "baby." The image is actually from Etsy, described as "Baby Memorial/Honor Sculpture." The tiny figures pictured are clay sculptures which the seller says are "for those who have experienced the loss of a pregnancy during the first trimester and are searching for a tangible keepsake to honor their precious Angel." The Etsy page includes reviews from mothers describing how much it means to them to have a way to mark their grief and loss. How ironic that the OP uses art specifically meant to help people value and mourn prenatal life to instead deride those very viewpoints--and all while claiming to be representing science. It's kind of amazing.

Here's an image of an embryo around 6 weeks post-fertilization (or 8 weeks LMP - after the beginning of the last menstrual period) courtesy of The Bump: 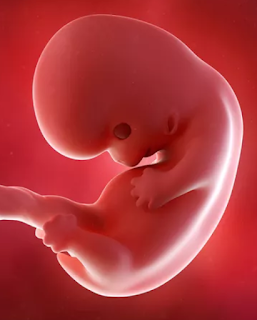 As the prenatal website explains, "You may have your first prenatal appointment right around now. At this visit an ultrasound may be performed to determine how far along you are. You may even hear—and see—baby’s heartbeat."

The Bump's use of the word "heartbeat" is representative of not only many prenatal websites but also descriptions medical professionals give pregnant women during routine prenatal care. Using "heartbeat" to describe embryonic activity at this stage is neither new nor unique to anti-abortion advocates.

Some pro-choice people argue that when medical professionals say "heartbeat" in these contexts, they're just using layman's language with their patients, just as an OBGYN might say "baby" when talking to a woman with a wanted pregnancy. That doesn't make "baby" a medical or technical term.

But "heartbeat" is appropriate both for the layman and as a medical description. As The Developing Human by Moore et al (10th Edition, 2013) explains in "Chapter 13: Cardiovascular System":

The cardiovascular system is the first major system to function in the embryo. The primordial heart and vascular system appear in the middle of the third week (Fig. 13-1). This precocious cardiac development occurs because the rapidly growing embryo can no longer satisfy its nutritional and oxygen requirements by diffusion alone. Consequently, there is a need for an efficient method of acquiring oxygen and nutrients from the maternal blood and disposing of carbon dioxide and waste products.

In other words the embryonic heart exchanges oxygen and carbon dioxide even before it fully develops into the more complex heart we're familiar with. Those insisting we say "fetal pole cardiac activity" instead of "heartbeat" or describing the embryonic heart as just "electrically induced flickering" or--more ridiculously--"vibrations" try to imply that the four chambered heart doesn't happen until months later; that's completely incorrect. Here's a diagram from Moore et al of the heart at 35 days (approximately 5 weeks post-fertilization):


At this point the embryonic heart already has four chambers. It's reductive to describe this development as no more than "pulsing cells." 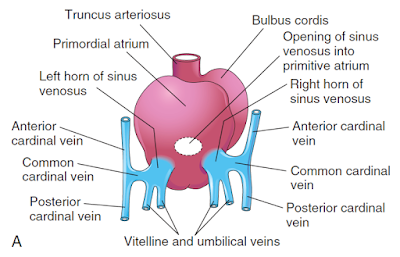 Here are the veins illustrated at 6 weeks: 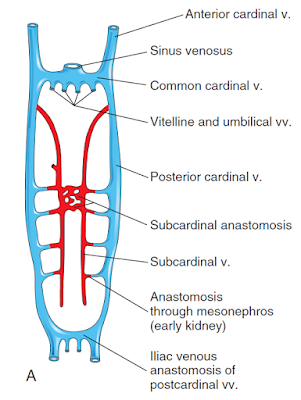 By 6 weeks the heart is chambered and moving blood unidirectionally through coordinated contractions--that is, the heart is rhythmically pumping blood. Of course the heart has more development to do, but the pro-choice side is hand wavy at best to insist we can't say "heartbeat"--and they are flatly wrong to say embryos don't have hearts! Which side is anti-science, again?

The embryonic heart is "a bunch of pulsing cells" in the exact same way the embryo herself is "a clump of cells"--in a way meant to downplay that abortion kills prenatal humans. It's continually remarkable to me that the pro-choice side seems to badly need to obfuscate the humans abortion destroys. I suspect if arguments regarding bodily rights and fetal personhood were stronger, fewer pro-choice people would recoil so hard at what are otherwise basic and generally uncontroversial facts.

Of course, and as always, the fact that a human organism has a heartbeat doesn't in itself establish moral worth. But it's one thing to argue that the embryonic heart is irrelevant; it's another to suggest it doesn't exist. I'll take my scientific education from an embryology book, not Etsy, thanks.

Read more details about why these articles are misleading here.
Posted by M at 11:22 PM