The religious diversity of the pro-life movement 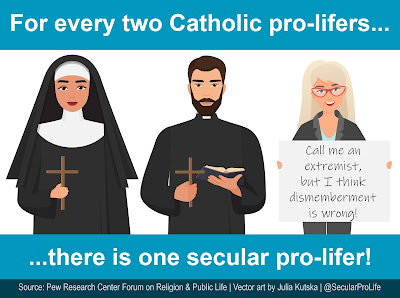 Last week, we posted the above graphic to our social media pages with the caption "In the United States, 23% of abortion opponents are Catholic and 12% have no religious affiliation. We are proud to stand with our pro-life brothers and sisters of all faith backgrounds to end the violence of abortion!"

We got a ton of likes and shares, and also questions. Mostly, "Wait, what about the other 65%?" and "Where are all the Protestants?"

We did not, of course, mean to suggest that pro-life movement is made up entirely of Catholics and secular people. It's far more diverse than that. We simply found the two-to-one statistic interesting, in contrast to the oversized role that Catholicism has played in the pro-choice imagination (e.g. "Keep your rosaries off my ovaries!").

Our source is the Pew Research Center Forum on Religion and Public Life, and if you're as nerdy as I am, you could get lost in that data set for hours. But I won't keep you in suspense. The religious makeup of Americans who say abortion should be illegal in all or most circumstances* is:
It's not surprising that, in a largely Protestant nation, the pro-life movement is also largely Protestant. However, no one Protestant tradition commands a clear majority. Evangelical and Mainline Protestants would add up to exactly 50%, but speaking as someone who grew up in a mainline denomination (the United Methodist Church, which is officially pro-choice), Pew is right not to group those two together. And as for how Protestant denominations and Catholicism can clash... literal volumes have been written.

Ironically, the godless approach may offer the best chance to unite these disparate factions into a cohesive movement for the human rights of the smallest and most vulnerable humans among us.


*Note: These figures add up to only 99% due to rounding.

Posted by secularprolife.org at 8:22 AM