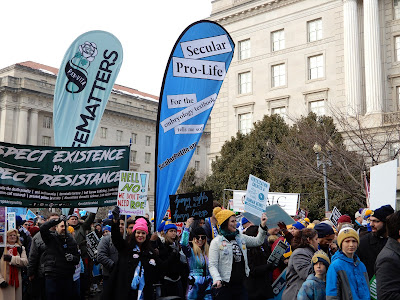 What an incredible year 2019 has been! The U.S. abortion rate hit a record low, the Supreme Court is widely believed to have a pro-life majority, and Secular Pro-Life has been hard at work.

Winter: Secular Pro-Life marked its tenth anniversary in January. We took to the streets in Washington, D.C. (March for Life) and San Francisco (Walk for Life West Coast) in support of prenatal rights. The 2019 March for Life theme—Unique From Day One: Pro-Life is Pro-Science—was just perfect. The New York Times released an explosive report that Planned Parenthood discriminates against its pregnant employees. Late-term abortion took center stage as New York passed, and Virginia attempted to pass, extreme pro-abortion and even pro-infanticide laws. SPL president Kelsey Hazzard had an op-ed in the New York Daily News. On this blog, SPL co-leader Monica Snyder demonstrated that most late-term abortions are not medically necessary and debunked eight pro-choice talking points. Interest in abortion reached a record high, as shown in Google trends.

Spring: "Baby Chris" was conceived in March, taking our blog readers along the nine-month journey from fertilization to birth. Monica gave a presentation to pro-life youth in Oregon on how to debunk three major pro-choice myths. Unplanned hit U.S. theaters on March 29. In April, Monica testified before the California legislature against the horrific bill to turn public college health centers into chemical abortion vendors. She also presented the case against abortion to public health students at UC Berkeley. The "Strange Planet" webcomic briefly became a pro-life issue, because 2019 is a bizarre timeline. In May, we sounded the alarm at pro-choice advocacy for DIY chemical abortions, which will put women at risk of the very "back-alley" problems they claim we need legal abortion to avoid. SPL co-leader Terrisa Bukovinac attended a Senate symposium on sex trafficking and its impact on women's reproductive health.

Summer: Kelsey and Terrisa attended the Pro-Life Women's Conference (where we recruited volunteers for a project you will hear more about in 2020); meanwhile, Monica had to school everybody on what a heartbeat is. We reported again that Google Trends showed a record level of interest in the abortion debate, beating the prior record set only a few months earlier. Kelsey brought the secular pro-life message to youth activists at the Louisiana Right to Life PULSE summer camp. Retired Supreme Court Justice John Paul Stevens died at age 99, leaving a tragic abortion legacy. Kelsey challenged the pro-choice contention that we're out to control women's bodies with a thought experiment, and participated in a live debate on YouTube. Terrisa spoke at the Democrats for Life of America conference. And Monica gave birth to her son!

Autumn: We took part in the "Let There Be Life" conference at UC Berkeley (which Terrisa led while wearing her other hat: president of Pro-Life San Francisco), and the annual Rehumanize conference. At Rehumanize, Kelsey presented the secular case for life, and for the first time, SPL also organized a workshop on secular resources for healing, which was very well-received. On the blog, we responded to Slate's criticism of the phrase "except in the womb" and examined abortion's perverse effect on families suffering after miscarriage. Our facebook page grew to 30,000 fans—a massive 40% leap from the beginning of the year. And of course, we turned our attention to January 2020, preparing for the next March for Life season! If you like what we're doing, please donate as you are able.

President's message: Every year, I prepare the year in review and marvel at how much this community has been able to accomplish with a shoestring budget and no paid staff. 2019 was particularly challenging because I have taken on additional pro-life activities outside of SPL; most notably, a mom who chose life under difficult circumstances has been staying at my house, and I am also writing a pro-life novel which I expect to have available for your reading pleasure in 2020. (The title is No Right To Be Here and I promise to keep you posted.) None of this would have been possible without Monica, Terrisa, all our guest authors, and the many other volunteers who have helped SPL in myriad ways over the past year. Thank you all so much!

Posted by secularprolife.org at 7:52 AM