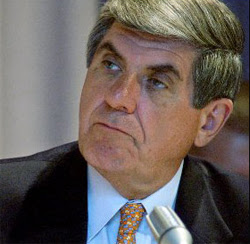 Remember when Nebraska Senator Ben Nelson was the holdout vote for the Senate version of the healthcare reform bill? He opposed it on the basis of its funding for abortion, but when legislators offered a deal to reduce Nebraska's Medicaid expenses, he conveniently caved. Pro-lifers criticized him harshly, characterizing his switch as a "betrayal."

So, what's happening to Nelson's dirty deal? According to an ABC News article on the possibility of passing the health care reform bill through reconciliation:

Obama will also herald the removal of extraneous provisions in the bill such as the so-called "Cornhusker Kickback," a deal to secure the support of Sen. Ben Nelson, D-Neb., in which the federal government would pay for Nebraska's Medicaid expansion.

Let this be a lesson to "pro-life" politicians who put money over human rights: when you betray your constituents, you might just find yourself being betrayed next time!
Posted by secularprolife.org at 10:54 AM