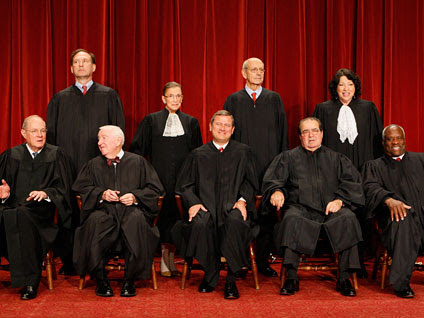 To the surprise of virtually no one, liberal Supreme Court Justice John Paul Stevens, who is approaching his 90th birthday, has announced that he plans to retire while Obama is in office. Much like the replacement of Justice Souter with Justice Sotomayor, this probably will not have much impact. Seeing as there's no way in hell that Obama will appoint a pro-life replacement for Justice Stevens, our main concern is to avoid having an extreme pro-abortion voice on the Court.

Unfortunately, many of the nominees are exactly that. Going through the Huffington Post's list of front-runners:
*Solicitor General Elena Kagan believes that abortion businesses, but not pro-life pregnancy clinics, should receive federal subsidies.
*Seventh Circuit judge Diane Wood opposes parental consent, the ban on partial-birth abortions, and pro-lifers' right to peacefully demonstrate.
*I couldn't find anything on D.C. Ciruit Court of Appeals Judge Merrick Garland's abortion position. He is mostly known for his criminal prosecution experience and is considered one of the more conservative names on the short list.
*Cass Sunstein has stated that pro-lifers want to "co-opt women's bodies." (Interestingly, Sunstein happens to be a strong supporter of animal rights, arguing that they have the right to be free from physical abuse even in the absence of legal personhood. Mr. Sunstein, please give us your address so we can mail your Hypocrite of the Week award.)
*Michigan Governor Jennifer Granholm vetoed state legislation against partial-birth abortion.
*Pamela Karlan criticizes the Supreme Court's use of the terms "mother," "unborn child," and "abortionist" in Gonzales v. Carhart (in which the Court upheld a ban on partial-birth abortion.) She also says that there was "no evidence" for post-abortion regret in that case. In fact, the evidence came in the form of hundreds of affidavits submitted by the Justice Foundation.
*Stanford Law professor Kathleen Sullivan is a supporter of the Freedom of Choice Act.
*Senator Amy Klobuchar of Minnesota had 100% ratings from NARAL and Planned Parenthood, and a 0% rating from the National Right to Life Committee, in 2008.
Posted by secularprolife.org at 12:07 PM

Okay, looks like Sen. Klobuchar has said on the Rachel Maddow show that she's not interested in the job.