I have lived in the San Francisco bay area for five and a half years. This was my 5th year attending Walk For Life WC. Some years I go by myself; other years I’ve gone with my family and some friends. This year I went with one of my younger sisters and my boyfriend. This time we decided to bring out own signs. Previously we have carried no signs or perhaps snagged some of those "Women Deserve Better" signs. But if there's anything a massive political protest needs more of, it's humor. I mean diversity? I don't know. Anyway, all three of us chose designs that were originally created for the Secular Pro Life Zazzle store. 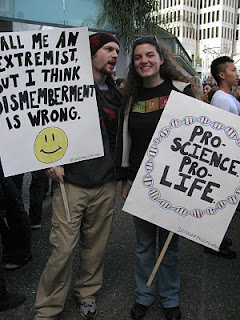 Left: "Call me an extremist, but I think dismemberment is wrong." Right: "Pro-Science. Pro-Life." 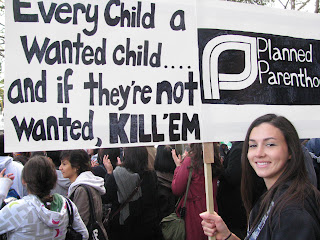 We arrived at the Justin Herman Plaza in time to hear the last two speeches, which were heavily religious. I was thinking about the relationship between religion and the Pro-Life movement for most of the Walk, actually. More on that later. Shortly after the speeches ended and everyone started migrating to the route, a girl saw my sign, which says "Secularprolife.org" at the bottom, and said she knew the girl who founded Secular Pro Life! So we talked about that a bit; she told me how her local Pro-life group includes an atheist, which is cool.

As we started milling toward the route I saw many people read my sign approvingly. Several people asked my boyfriend if they could take pictures of him with his sign, which is probably my favorite slogan too, but he wanted that sign. Anyway I figured I could wear my "Th.In.K" shirt and carry the "Pro-science. Pro-life." sign and be all themed.

My sister's sign, on the other hand, got mixed reactions. Lots of people liked it and laughed, but several people didn't get it and thought she was a pro-choicer in our midst. At one point one of the volunteers told me that all three of us were on the wrong side and needed to cross the line to the pro-choice side. I smiled, confused, and said "Um, what?" and then he read our signs more closely and said "Oh! ...oh, never mind." I hope he was just reacting to the Planned Parenthood logo and not to my "Pro-science" phrase. That would just be depressing.

Later a woman saw and tried to block my sister’s sign, and called a volunteer over to ask her to leave. My sister again explained that she is pro-life and the sign is satire. The volunteer responded that that may be so, but that my sister should "strongly consider" taking her sign down because it is "antagonistic". My sister said "Well, I considered it. And no." So the guy left. Ah well. Most people pointed and smiled and took pictures of it, so I think most people got it.

After talking about it later, we decided it makes sense that people would think my sister was a pro-choicer, or more accurately, a counter protester, because the SF counter protesters tend to be as incendiary as possible, even if it makes the overall pro-choice side look awful. I think some of them don't care about abortion much one way or another and actually just want to be outrageous, really. Exhibits here: 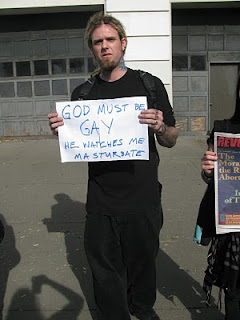 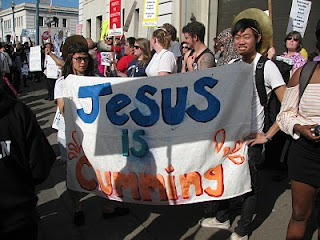 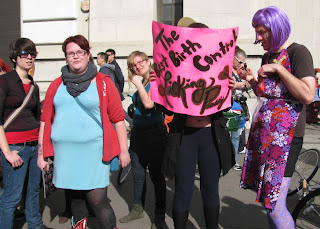 So at first, actually, I was a little bit disappointed in the Walk. We only saw maybe five counter protesters. That's even less than last year, and last year it was raining and nasty. This year was gorgeous. Eventually, though, we came across two separate and relatively large crowds of counter protesters, so that was satisfying. I tried to get pictures of every sign. I usually asked permission and some counter protesters smiled and posed. It’s funny to me to imagine getting along with them in other contexts.

I noticed that the counter protests were generally focused as much or more on being anti-religion as they were on abortion at all. 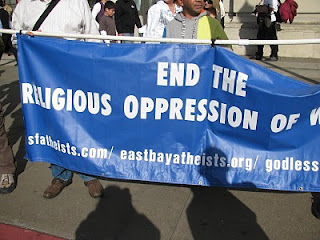 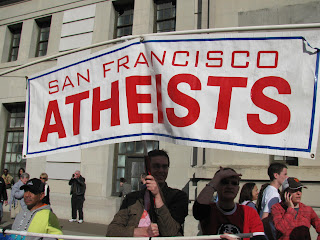 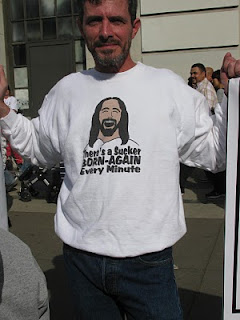 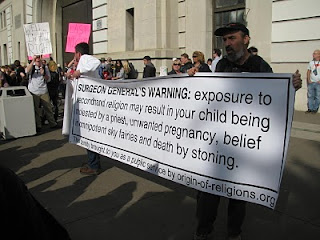 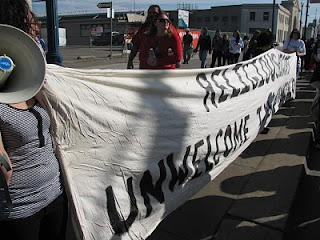 And it's understandable, to an extent, since most of the signs and groups at the Walk were overtly religious and used religion as a primary reason for being pro-life. 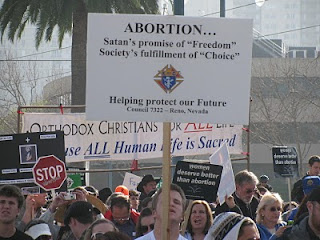 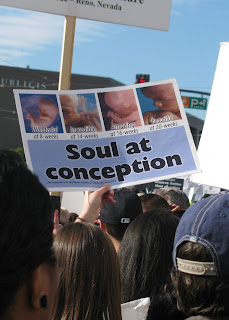 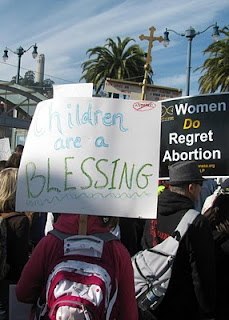 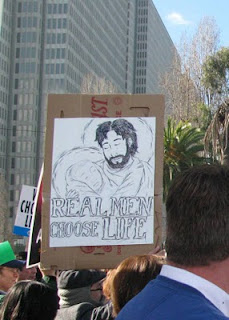 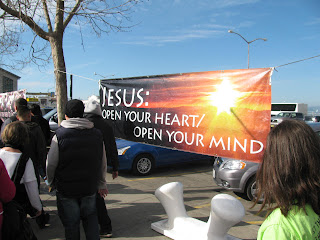 The thing is, I think that the religious commonality really pulls the overall pro-life movement together, and I think religious faith gets people impassioned about the pro-life cause. I am sure if religion were left out of it entirely, the Walk overall would be much, much smaller. Also there's a lot to be said for solidarity.

Even so, I can completely see how the speeches and signs and such can really alienate secular pro-lifers as well as people open to being pro-life who are not religious. After being involved with Secular Pro Life more this past year, the religiosity felt more obvious to me than before. There were also a few signs (though not many) that spoke about the sanctity of marriage between a man and a woman, and that just flat out annoyed me. That's not the issue we're here to address, and I don't think it really does anything for the pro-life side. This isn't supposed to be a Catholic or Protestant movement. It is supposed to be a pro-life movement which, yes, is comprised largely of Catholics and other Christians, but is comprised of others as well. If the goal is to spread the mentality that abortion should be restricted, going on tangents about gay marriage is useless at best, counter productive more likely. I believe these side issues are more likely to alienate potential pro-lifers than they are to draw the pro-life crowd closer together.

On a happier note, my boyfriend really got into the Walk. This is only his 2nd Walk, first time with signs, and he managed to hold his (and, often, mine, while I was taking pictures) high the whole time. He wanted to stand on the side nearest counter protesters and passers-by (as did I, as did my sister). He had a few people yell things at him specifically. One guy said "What dismemberment?!" and my boyfriend just said "Well, fetal dismemberment." The guy walked away. Later a girl shouted at him "Well have you ever been circumcised?" He didn't respond, because we all agreed it's useless to get into any kind of verbal debates at a Walk. Only the most passionate people from both sides show up to begin with, and passionate people aren't usually looking for a rational debate. They’ve already picked their sides. So my boyfriend didn't say anything. I assume the girl meant that circumcision is a kind of dismemberment so my boyfriend can't *really* think dismemberment is wrong and he's a hypocrite to be anti-abortion. Or something. I could be wrong; that's just what jumped to mind.

There were tens of thousands of pro-lifers there, compared to the 7500 that showed up for the first Walk for Life WC several years ago. I was pleased with how few of them responded directly to the counter protesters. The Walk for Life WC always encourages participants to uphold the standard of a peaceful demonstration, and this year was no exception. Overall it was a really good Walk. My sister is already plotting what kind of sign to make next year. :)
Posted by M at 6:05 PM

Though I am Catholic, I am consistently telling other pro-lifers that they need to also appeal to those who are not religious - not necessarily tamping down the religiosity, but to have a broader appeal. Thanks for having a blog, I'll be checking back often.

Glad you like the blog, and even more glad you understand the effectiveness of being a person of faith who can communicate to people with different beliefs.

Hmm... To me, circumcision and dismemberment are not same. But I glad that you had a good time. =)