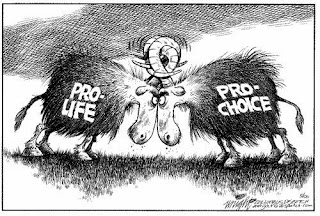 Yesterday, instead of doing P-chem homework, I wandered around the internet. A friend had mentioned The Abortioneers blog, where people who perform abortions or help women get access to abortions write about their experiences and, I think, seek solidarity. Curious, I read a few posts. It’s a bit like staring through the Looking Glass into some parallel but opposite world. They’re passionate, unified, determined, they believe in their motivations, their cause…and they are diametrically opposed to us.

At the bottom of the page are links to “Abortion-Friendly Web Sites,” which I also perused. There was one for Men and Abortion where men who wanted to support their partner's choice could get practical questions answered and blog about their feelings regarding the whole thing. I skimmed. In one post a man said the abortion was right “most of all for our unborn child.” He had been divorced once before and didn’t want to risk the unborn child going through the pain his current 10-year-old endures due to divorce. I wonder: does the 10-year-old wish she’d never been born? I read another post in which a man asked his unborn child to forgive him, and said her grandmother was already waiting in heaven.

I didn’t feel much while reading that blog. First of all, men don’t really have a choice. They have influence: they can cajole or plead or manipulate or reason or demand that their women carry the pregnancies. Ultimately, though, it is up to the woman. Reading about men who call the fetus an unborn child, who feel they need forgiveness, who regret—it makes me sad, but it doesn’t bewilder me. He may not have wanted this, but he had no choice. It happens, and he regrets it, but he can’t stop it.

Secondly, the bits of the blog I skimmed didn’t seem to describe the fetus the way I see it. The fetus seemed like an abstract concept—an entity that, should it be allowed to live, would someday be a child, but wasn’t a person right now. Obviously I disagree with that view, but I can wrap my head around the idea that if you don’t consider the fetus a person, abortion is something you can live with.

My perusal continued through Exhale, The Coathanger Project (which seems to have been abandoned?) and landed with Our Truths – Nuestras Verdades. Edition No. 3 is “Feelings About the Fetus.” I read a piece called “My Fragile Fossil” in which a woman describes seeing her fetus on a sonogram and her visceral reaction to that moment.

“My fetus. At about two inches magnified, it looks like a picture of a fetus that I had seen in my high school health book: a bulbous head bigger than its body, tiny hands and feet, and a long curly tube—the umbilical cord—which looks like an intestine.”

“Leaning forward, I notice the fetus following my body’s rhythms like a buoy bobbing in the ocean, moving with the tide. I am not prepared for the emotions that hit me as I gaze at the image. In this moment, my fetus becomes more than a tiny gob of cells or a picture from an old textbook. The longer I stare at the screen, the more I begin to fantasize about how the fetus will change as it develops and becomes full-term. Will it grow to have dark skin like it’s father? Will it have short, stubby toes and wide feet like me? Will it later have my mother’s hair, black and sleek?

Tears fall like torrents down my cheek, reminding me of my difficult and complicated decision.”

The woman chooses to keep a picture of the sonogram. She goes through with the abortion a week later using Mifepristone. Immediately after taking the pill she is pretty distraught. A nurse takes her aside to see if she’d like to talk, and the office they enter has another copy of the picture of her fetus on the bulletin board, which of course makes the woman even more upset. The story ends with her walking out of the office while touching her notebook, which contains her own copy of the sonogram picture.

My first reaction: great sadness. The woman is miserable, the fetus is dead, what a stupid situation. Also anger. Why did she risk putting herself in this stupid situation? And once in the situation, why couldn’t she put the child up for adoption? Is it more upsetting to watch your kid raised by others then to be the mother of a dead fetus? I suppose it must be, or she may have chosen otherwise.

After arguing about one topic perhaps hundreds of times over the years, it’s hard to feel continuously upset. Sadness and anger will well up occasionally, but they don't persist. For me the final reactions, the lasting feelings, are simply bewilderment and defeat.

I find myself, by default, believing that many people are pro-choice because they don’t view the fetus as I do. They think of the fetus abstractly (blob of tissue, clump of cells, product of conception) or as an aggressor (parasite, tumor, invader). If I believed this is what a fetus amounted to, I would probably also be pro-choice. I don’t agree, but I can comprehend. This default mindset is also an outlook with hope. Convince people of the humanity, strengthen the pro-life side, and maybe someday (perhaps not the foreseeable future, but someday) the tide can turn. Maybe.

But there are pro-choice people who view the fetus more the way I do: alive. Not in some technical sense, not by a biological definition, like a virus or cells going through mitosis. Alive like I’m alive. A human being. A very small, underdeveloped human being, to be sure, but a human being nonetheless. I can comprehend choosing to “terminate a product of conception” or “remove a parasite.” But killing a human being?

Even then, I can imagine someone being “personally pro-life, politically pro-choice.” They are conflicted. They value fetal life, but abhor forced gestation. That place is a little harder for me to mentally stand in than the “product of conception” view, but I can get there.

But there are women who view the fetus the way I view the fetus, and personally choose abortion? That’s not a position I can reach. I don’t understand. You see what I see, yet you can stomach it. You can choose it. I don't understand.

What hope, then, can the pro-life movement possibly have? Even if we could convince the whole country, the whole world, that “person” begins at conception, it still may not change abortion law.

I participate, in my limited ways, in the Pro-life movement largely because I don’t believe it can do any harm. But often I’m not convinced it does much good, either. This isn’t all one big misunderstanding. It’s understanding and fierce disagreement. Irreconcilable disagreement. How can we overcome such an intractable position?
Posted by M at 9:39 PM

I know this is a *really* old post, but I can easily understand how women who view foetuses in the same way as you (and I) might still "choose" abortion.

As I'm not an American, I don't know if the same pressures are there, but I encountered *huge* pressure to have an abortion. I was feeling emotional, vulnerable, terrified, confused about my unplanned pregnancy. There were people (not the medical professionals fortunately) telling me that I *had* to have an abortion, that I wasn't ready (who *is* ready?!), that I wasn't capable of surviving it, that I would be a terrible mother, that it was the only sensible option, that they would have nothing to do with me or my child if I kept the baby, that I was being irrational and hormonal and selfish for not wanting an abortion.

It's easy to believe this stuff when you're feeling vulnerable! So much energy goes into making you feel guilty about loving your unborn child, making you second-guess yourself at every turn. I think people here judge you more harshly for *not* having an abortion. I *still* feel guilty sometimes about keeping my baby, even though I'm actually happy about it. Pretty messed up. :(

I might have done it too, if not for the counselling I got from the Family Planning organisation here. They didn't counsel me to keep the baby, they just described the reality of the options available*** and said that the right decision to make was the one I truly wanted to make, not the "sensible" decision or the decision everyone else wanted me to make. Sadly, I think many women are stuck without this kind of counselling because they're not even aware that it's available, I certainly wasn't aware of it until I opened up to my GP about my difficulties in coming to a decision.

***FYI, in Austalia, adoption is widely characterised as traumatic for both mother and baby, and it certainly was once upon a time but people aren't aware of current reality of it, and apparently counsellors are needing to go to some pains to correct the misconceptions that people have about adoption. I don't know if this is comparable to the situation in the US, but it at least explains why so few choose it here.

Thank you for the insightful comment. I hadn't thought about that perspective--a woman who sees the humanity of the unborn but really feels pressured to abort.

Would you be at all interested in writing a guest blog post about your experience? It can be done anonymously if that's your preference.

If you are interested, please email us at info@secularprolife.org to discuss.