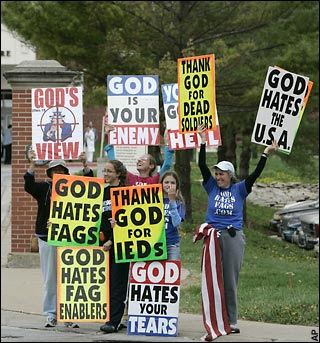 congregation which believes that the deaths of American soldiers are God's punishment for homosexuality. (WBC also has a problem with... well, just about everyone who's not a member of WBC.) It communicates these messages by, among other things, protesting military funerals. In an 8-1 vote, the Justices held that, despite the undoubtedly offensive nature of these protests, WBC's behavior is protected by the First Amendment. Interest groups and media outlets on the political left and right generally agree that this was an important victory for freedom of speech. As the Chief Justice's majority opinion says, "As a Nation we have chosen . . . to protect even hurtful speech on public issues to ensure that we do not stifle public debate."

How ironic and sad that the New York City Council would choose that same day to enact limitations on pro-life speech.

The new ordinance requires pro-life centers to "warn" their clients that they opppose abortion. Supposedly, this is in the mothers' interests. But no parallel requirement exists to inform women at "pro-choice" clinics that the counseling there is skewed toward abortion. In fact, 97.6% of pregnant women served by Planned Parenthood wind up getting abortions-- and that's according to Planned Parenthood's own data.

The aim of New York City's new ordinance is simple: get rid of the abortion businesses' main competition by discriminating on the basis of viewpoint. Never mind that NYC already has a ridiculously high abortion rate. Never mind that similar legislation has already been found unconstitutional in Maryland. In the minds of extreme abortion advocates, providing women in crisis pregnancies with alternatives to abortion is such a bad thing that it should actually receive less protection than WBC's despicable anti-gay protests at military funerals!

A lawsuit to vindicate pro-life advocates' First Amendment rights is no doubt forthcoming. Stay tuned.
Posted by secularprolife.org at 11:44 AM