Down to the wire

Budget negotiations are intensifying; ABC News is calling today "Shutdown D-Day." Taxpayer funding for scandal-plagued Planned Parenthood, the nation's largest abortion provider, is a huge sticking point. Some pro-abortion Democrats have signaled that they would rather see a government shutdown than end funding for Planned Parenthood. Democrats f 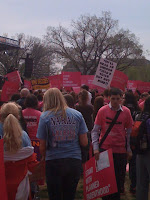 or Life president Kristen Day cautioned that such a course would be a "huge mistake."

Hoping to preserve Planned Parenthood's $300 million+ annual subsidy, abortion advocates organized a "Pro-Choice Lobby Day" in Washington, D.C. yesterday. They were hoping for 5000 supporters to show up. Planned Parenthood reported 4000. Students for Life of America, which infiltrated the rally, puts the count at closer to 1000. For purposes of comparison, the annual March for Life draws a quarter of a million pro-life advocates to Washington!

The pro-abortion enthusiasm is waning. We have the power to defund Planned Parenthood! It's time to end subsidies to the organization that ends the lives of more than 300,000 innocent unborn babies every year.

Our elected officials need to hear from us NOW. Enter your zipcode here to get in touch with your representative.
Posted by secularprolife.org at 11:03 AM