I find it ironic that today we celebrate Women's Equality Day and commemorate the 91st anniversary of the 19th amendment made to the Constitution; the amendment that gave women the right to vote in 1920. It's ironic to me because a hot issue this week is Vice President Biden's statements to Chinese officials commending their One Child Policy that forces women to abort their children, "Your policy has been one which I fully understand -- I'm not second-guessing -- of one child per family." The One Child Policy not only forces abortion but discriminates against women born and unborn. It is estimated  that there are 37 million more males then females living in China. I encourage you to read the article 160 million and Counting that talks about women who are missing due to sex selective abortions on female babies.

Severe public criticism has justifiably been made of Vice President Biden's support of China's One Child Policy over the last few days. President Obama's administration released a statement stating they "strongly opposes all aspects of China's coercive birth limitation policies, including forced abortion and forced sterilization." But as I explained in a recent blog, President Obama's actions speak louder than words and President Obama has made it so the Unites States supports China's One Child Policy (Learn more here). 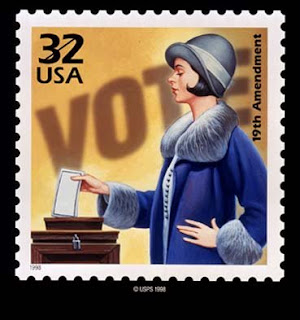 "They let their feet speak when their voices alone were not enough, protesting and marching for their fundamental right to vote in the face of heckling, jail, and abuse. Their efforts led to enormous progress millions upon millions of women have since used the power of the ballot to help shape our country."

"On the 91st anniversary of this landmark in civil rights, we continue to uphold the foundational American principles that we are all equal, and that each of us deserves a chance to pursue our dreams. We honor the heroes who have given of themselves to advance the causes of justice, opportunity, and prosperity."

I hope that our president means what he said in this proclamation, and that he will allow all women -- born and unborn -- to pursue their dreams. I hope that the heckling, jailing, and abuse on those who believe in protecting the innocent women in the womb ends.  President Obama, stands firm in the conviction you placed on all of us when you said "I call upon the people of the United States to celebrate the achievements of women and recommit ourselves to the goal of gender equality in this country." (Presidential Proclamation--Women's Equality Day 2011)


Gender equality is not made by:


Standing In Defence of the Voiceless,

Obama is all about saying what he thinks people want to hear but then doing what he really wants. It's bs like this that make me pretty confident he won't be reelected. Nobody trusts him.

One thing that's good is that no one can say President Obama was dishonest with his stance on abortion. He avoided abortion related questions during his campaign, but he had a pro-abortion record that couldn't fool anyone who did their research. What's unfortunate is that he claims to care for women's equality (along with other things), and as you said, tells people what they want to hear, but doesn't hold true to his convictions. Then again, that what his entire campaign was filled with... Of course people want to hear about hope!