On August 1, 2011 the Department of Health and Human Services decided to mandate coverage of birth control, surgical sterilization, and abortifacients in all private heathcare plans.

Are you a tax payer? Do you support Birth Control, Abortifacients (a drug or agent that causes abortion), and surgical sterilization? Well you’ll be providing these services for millions of Americana's to take advantage of at any time. Despite religious or moral beliefs you’re paying for it, and patients do not even have a co-pay for these services. 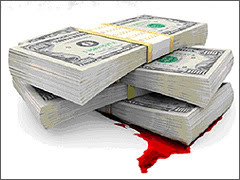 While I was sitting in urgent care the other day I couldn't get over the fact that the woman in front of me was 19 weeks pregnant and had to pay a $15 co-pay in order to see a doctor after she fell, couldn't walk, and was having severe back and stomach pain. While in contrast, August 1st Health and Human Services (HHS) mandated that private health plans will cover "preventative services": contraceptives, sterilization, and abortifacients with NO co-pay or out of pocket expenses for these services.

Now, I see nothing wrong with co-pays. But I find it ridiculous that a woman would not have to pay a dime to be sterilized, chemically abort her child, or prevent her body from naturally beginning human life while a woman who is pregnant, and severely hurt, has to pay to even get in the door at urgent care.

Please defend the consciences of millions of Americans who do not support abortifaceints, contraception, and sterilization. This will only take a few minutes:

Birth control (including the so-called abortifacents) is exactly what is needed, in part, to stop abortions.

It's not a person before there are brainwaves. After brainwaves, it may be a person, and should be protected as though it is one.

That said, this mandate is objectionable for different reasons: it should be fought because it violates the conscience of other people. I think the Catholic rules about contraception are rediculous. I think their idea that one-celled organisms can be people is absurd. But I also think that it is in general a terrible idea to force violation of the consciences of other people.

I don't oppose contraception either, but what I see here is the potential for a slippery slope. If we can force involvement in contraception against peoples' consciences, it's easy for the abortion lobby to say "abortion is next. No more Hyde Amendment."

Kelsey, according to the scientific evidence, the methods that many prolifers dismiss as "abortifacient" in fact only have prefertilization effects. So this is an opportunity to draw a truly bright line between contraception and abortion-not a slippery slope. I agree that prenatal care and many other health services should have the copays abolished, too. But voluntary family planning-pregnancy *prevention*-through the method or methods of one's choice-is a universal human right and a basic form of preventive care that is an essential alternative to abortion. My family has personally suffered because the only health plan we could get, because of my multiple disabilities/health impairments and our poverty, absolutely refused to cover the best choice of family planning for me, sterilization. I had already experienced reversible-contraceptive failure despite correct & consistent use and had been through a very high risk, multiple-hospitalization pregnancy that threatened my health and life and my daughter's. I did not want to put me or any babies I might otherwise conceive through that. You know how long it took my family to pay off this necessary expense? We had to scrape together the down payment-I think we even had to skip the rent that month. And it took us *six years* to pay off the rest, adding to our already great financial struggle. It was the best choice, it was a life and death matter-so why such a lack of support? And there are so many stories like mine-this is not an outlier story. So many women cannot access, or access consistently and affordably, the right methods for them, and too many unintended pregnancies and abortions result.

Timmerie, any response to Marysia?

I understand this issue may or may not be agreed on. But I would like to point out a few things which we all should be able to agree on.

1. Birth control, sterilization, and abortifacients may be a right. But it's not your right to receive these services for free. Nor should tax payers be forced to pay for these services period.

2. If this is something that is extremely against one's moral beliefs they should not be forced to participate.

3. Our country is in a debt crisis, do we really need to be spending more money on healthcare such as this? I'm sorry but pay for your own birth contorl, sterilization, and abortifacients and if you can't, practice natural family planning. This method is successful and you simply refrain from intercourse during the brief periods of time when a woman is fertile. http://www.nfpoutreach.org/whatis.htm

4. Some approved contraception is an abortifacient. Information shared from NCHLA, "The FDA-approved "emergency contraception" (EC) drugs covered by this mandate can work by interfering with implantation. Also, the drug the FDA most recently approved for EC, "Ella,” a close analogue to the abortion drug RU-486, has been shown in animal tests to cause abortion. Thus, the mandate includes drugs that may cause an abortion both before and after implantation."

Timmerie-Tubal ligation, specifically, was *necessary to save my life and health.* Plus the lives of any babies I might have otherwise conceived.

My life was and is *not expendable.* If I had conceived further children, their lives wouldn't have been expendable either. Especially in the name of prolife of all things!

And don't you *want* to be part of a society that commits public resources to helping poor women and women with disabilities like me in exercising responsible, lifesaving reproductive decisions? I would consider that a privilege and blessing, to help women make lifeaffirming choices through my tax dollars-and a necessary action to respect their human rights.

Our country is in a debt crisis because it has decided to squander trillions to kill people in pointless wars and line the pockets of war profiteers-but heaven forbid that it give a nickle or dime to help its most vulnerable members with food, clothing, shelter, and health care, including basic preventive care like family planning that *prevents* abortions!

I am well aware of NFP/FAM. It is good and effective for some people, but for others, including many people like me with certain disabilities/health impairments, it does not work, it does not work as effectively as needed, or is not otherwise a good match with their situation. In my case, it was not a substantive option. So, what else was I supposed to do? Have a lifetime of celibate marriage, or divorce a man who loved (and still loves) me for life, and I him? Go through the panic and agony, every time my period was a day late, that I might be a soon-dead woman carrying a soon-dead baby?

As for allegedly abortifacient methods of contraception-there's a lot of misinformation about family planning floating around the prolfie movement. I recommend the article "Family Planning Freedom Is Prolife":

I also recommend this discussion of why "pay for your own birth control" overlooks many women's needs and thus contributes to unintended pregnancies and abortions:

Timmerie-was it right that my already stretched to the brink family-despite our very simple, secondhand stuff only way of life-had to get behind on our rent, just so I wouldn't have to get slapped with the lifethreatening and constricting "choices" outlined above? Was it fair?