As many of you know, the Protect Life Act was reviewed yesterday by congress. The good news is that it was passed by a vote of 251-172 and is now on it's way to the Senate. Now begins the difficult part of passing this bill. Will the Senate pass the Protect Life Act as well? After all we should be able to agree that elective abortions shouldn't be funded in Health Care. Why? Because the majority of Americans do not want to pay for it.

Here comes a even bigger struggle: President Obama has already released a statement that he would veto the Protect Life Act in the event it makes it to his desk. Clearly President Obama has no regard for the majority of the American people's wishes on this subject and he continues to push a rather pro-abortion agenda.

Some of the basics of what the Protect Life Act will do. 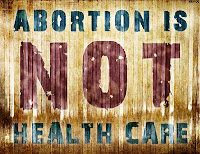 How do you think this will turn out?

For the Dignity of the born and unborn,

i think this is how it will turn out:
it will barely pass the senate, and obama will veto it. obama will lose the election, and it will be taken up and passed in the house and senate, and signed into law.
as an aside, it will be interesting to see what happens to the health care bill in its entirety after that.