Last Saturday (January 21st) was the Walk for Life West Coast in downtown .  Secular Pro Life representatives Neil and Ellen Snyder attended, carrying the SPL banner with the slogan: “Call me an extremist, but I think dismemberment is wrong.”  (This is my personal favorite slogan. If you like it too, you can get the bumper sticker at the SPL Zazzle Store.) 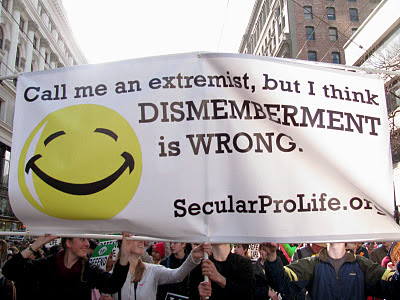 After the Walk, Neil and Ellen shared some of their impressions (and photos) with me.
The Walk began at City Hall. Neil and Ellen arranged the SPL banner in front of the while listening to some of the speakers.
Neil noted the speakers talked a great deal about faith and how abortion is against God’s rule.  Ellen found the speeches emphasized sin. It’s completely understandable that a large gathering of people with common beliefs will view abortion through the perspective of their faith.  However each year I can’t help but wonder how many potential pro-lifers feel too alienated by a religious-specific perspective to join us.
This is not to say the religious marchers are unwelcoming.  On the contrary, during the 2011 Walk I received many compliments and support regarding our SPL signs.  During this year's Walk several young Catholic marchers helped Neil and Ellen carry the considerably large SPL banner.  With their assistance, our representatives were able to hold the banner high while discussing the secular perspective on abortion with fellow protesters.
The Walk was as large as ever, numbering in the tens of thousands. 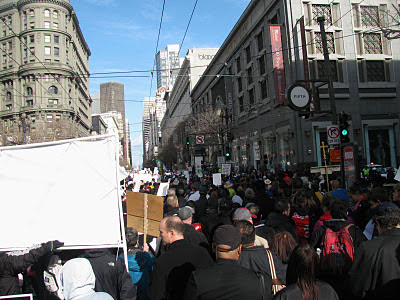 Of course there was plenty of religious expression: 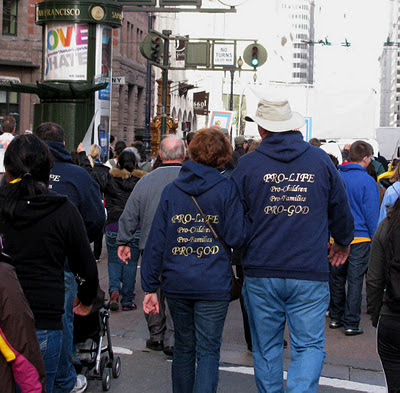 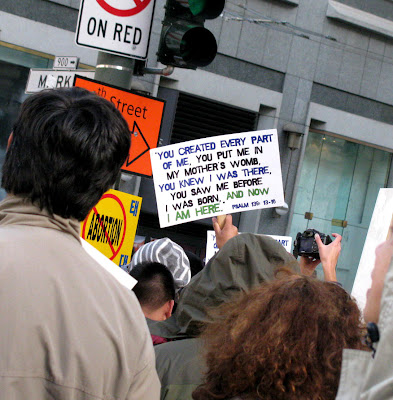 And plenty of reaction to religious expression: 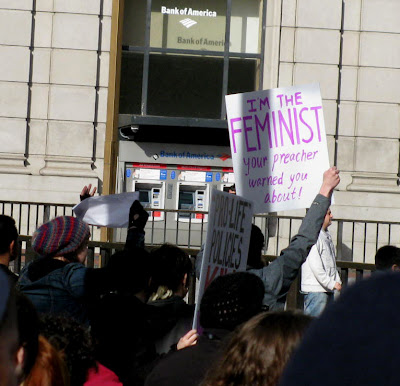 With this ongoing religious/anti-religious conversation, I’m all the more grateful that we were once again able to have an SPL presence at the Walk.  Many thanks to Ellen for getting the photos, and to Neil for getting, as he put it, "quite a workout" as he steadfastly carried the banner for the duration. :)
Posted by M at 6:39 PM

Neil, you look resolute! Well done, both of you.

This is awesome! I love that you guys were there :)

it must take courage to march for life in san francisco of all places. the march looked so peaceful and the choicees truly looked stunned. WE MUST SOMEHOW SHOW THEM OUR LOVE. We know we will keep marching for how ever long it takes. (whoever it was holding that sign, thumbs up)

I am one of the organizers of the Walk and noticed and liked your banner. There certainly are many arguments against abortion where God or religion are not a necessary part of the argument; just pure reason alone. I'm curious if you ever give talks and what kind of a speaker you consider yourself to be. If you have a video or sound recording of a talk, could you send it to penelope@ignatius.com? Thanks! Penelope

Thanks, Anonymous! You can view videos of our talks here: http://secularprolife.org/video.php
We were also recently featured on NPR: http://www.npr.org/2012/01/23/145642200/new-generation-grapples-with-roe-v-wade

Pantheroom, I don't see any comments of yours in the spam filter... try again?