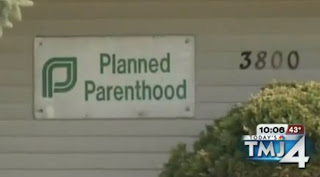 Sunday April 1, a fire bomb went off in the night at a Planned Parenthood clinic in Wisconsin causing minor damage. The following day, a number of accusations were made, throughout the daily news coverage, accusing various pro-life organizations and pro-life politicians for their possible involvement. The finger pointing that took place at a number of very good people across the country was atrocious and distracted from the fact that someone wrongfully put a fire bomb in the Planned Parenthood clinic.

When violent and unlawful situations such as these take place, it is important that all pro-lifers do not participate in any of the accusations concerning the violence. We all receive our news from second hand sources, and because we weren’t there we could not possibly know who is a suspect unless they we were physically present, and there was concrete evidence.

By re-posting articles which report the bombing, and include unproven accusations, we fuel a fire that defames other people and organizations. Unfortunately, when violent actions such as these take place, it brings a bad perception of pro-lifers that is simply untrue. I strongly encourage you not to help defame the pro-life movement.

April 4th, after much finger pointing, the suspect, that was arrested the day before, plead guilty to bombing the abortion clinic. First hand reports from the hearing share that the suspect was not associated with any pro-life organization; it was also reported that the accused exhibited mentally unstable behavior.

Much damage has been done over the last few days since the fire bomb. I strongly encourage you to seek unity and truth when sharing pro-life news updates and to not allow the finger pointing to run wild.

Posted by Timmerie Millington at 9:27 PM

Abortonsafety.com the +1 resource for finding an abortion clinic in your area. *hint hint*

hey! Now's not the time for finger pointing! all we ever do is publish the addresses of abortion clinics and the names of the doctors who perform them, along with a lengthy explanation for why they are the leading cause of child murder in america. If some wacko decides to do something violent, that's not our fault.