According to Gallup, Americans are split relatively evenly regarding the abortion debate: 47% describe themselves as "pro-life," 45% "pro-choice."  Half of America is pro-life, but that doesn't tell us a great deal.  Which people are included in the pro-life half? 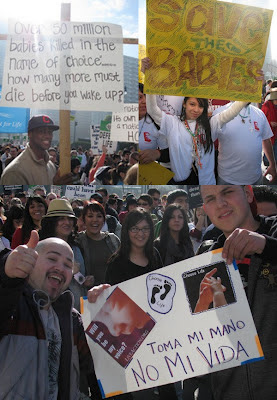 The same Gallup poll found that those who call themselves “pro-life” include:
The poll's margin of error is +4%, making these differences statistically insignificant; the pro-life movement includes roughly half of every age group.  It’s also worth noting that all of the above percentages have increased over the last 10 years.  People in every age bracket have become more likely to call themselves “pro-life.”

Gallup also found that 48% of men and 49% of women describe themselves as “pro-life.”  Again, with a margin of error is +4%, this difference is statistically insignificant.  There is no correlation between gender and views on abortion.
didn’t break down abortion views by race, but the Pew Research Center did.  The following people said abortion should be illegal: 40% of Non-Hispanic Blacks, 45% of Non-Hispanic Whites, and 50% of Hispanics.  This is a wider range than that for age, but it doesn’t align with the suggestion that the pro-life movement is disproportionately white.  Apparently Hispanics are more likely to consider themselves pro-life than white people, and there are millions of black people who are also anti-abortion. (If anyone has research regarding the abortion views of other racial or ethnic groups, please leave links in the comment section.)

The pro-life perspective is found in all ages, many races, and both genders. 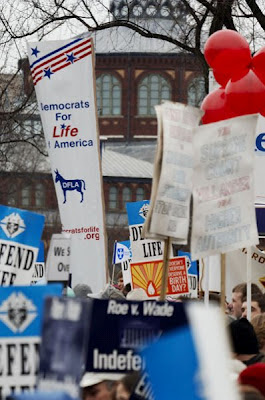 It’s more understandable to associate the pro-life perspective with conservatives or Republicans, given a) the rather inflexible party lines politicians often push and b) the definite correlation between political affiliation and abortion views.  Gallup found 68% of Republicans and 61% of those who “lean Republican” call themselves "pro-life," compared to the 62% of Democrats and 60% of those who “lean Democrat” that call themselves "pro-choice."

Even so, this rigid politicized view of the pro-life movement doesn’t take into account the 31% of Democrats, 34% of those who “lean Democrat”, and 45% of Independents who call themselves "pro-life" (37% of Independents call themselves "pro-choice.")  There are thousands and thousands of non-conservative pro-lifers who are overlooked when the pro-life movement is portrayed as a conservative movement.

Since I flatly don’t believe most pro-lifers support supreme dictators who crush opposition and take over all industry and commerce, I’m not actually going to bother with the term “fascist."  In American political debates “fascist” mostly means “You’re trying to use the democratic process to make laws I disagree with.”

But what about the term “Christian”? 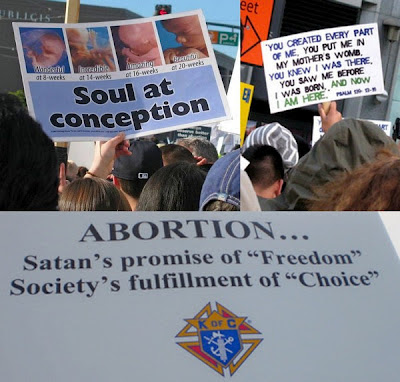 According to the same Pew Research Center survey, 52% of Protestants and 45% of Catholics believe abortion should be illegal, compared with only 25% of those religiously unaffiliated.  Additionally, 68% of Christians who attend church at least weekly think abortion should be illegal, compared to 38% of Christians who attend monthly or yearly and only 28% of those who rarely attend church.  These findings reaffirm the conclusion of a 2006 poll that stated “Christians have stronger anti-abortion views than non-Christians, and those who frequently attend church have stronger anti-abortion views than those who attend less frequently.”

While there are plenty of non-religious people who consider themselves pro-life, there is a strong correlation between religiosity (specifically Christianity) and the pro-life movement.  Conversely, people who support abortion rights are less likely to be religious.

Meanwhile, religiosity as a whole is declining.  According to a separate 2010 poll, church and synagogue membership has decreased 9% in the last 10 years, while 70% of Americans see religion losing influence in the country.  A 2011 Gallup poll found 15% of Americans claim to be Atheists, Agnostics, or have no religion, a dramatic increase over the last several decades.

While pro-lifers tend to be Christian, secularism is on the rise. These trends can sometimes lead to tension within the pro-life movement.  For example, several years ago I tried to volunteer at a local crisis pregnancy center, but I was not allowed to work with the CPC unless I signed a statement proclaiming Christ as my savior.  I'm not comfortable lying about something like that, so I was unable to help the center.  Some of my fellow secular pro-lifers take a different route; I’ve been told of situations where secular pro-lifers pretended to be Christian so they would be permitted to work with other pro-life activists.  It should never come to that.

I’m grateful for a group like Secular Pro-Life, creating space for non-religious pro-lifers.  I do believe, however, that the pro-life movement as a whole—not just SPL—should be inclusive.  There is already no correlation between the pro-life perspective and gender.  The pro-life movement includes all ages and people of diverse racial and political backgrounds.  I hope in the years to come the movement will include a more diverse religious composition as well.

UPDATE: A 2012 Gallup poll found a decrease in self-described pro-choicers to 41%.  However, views on the legality and morality of abortion did not change.
Posted by M at 9:38 AM

So religiousity is declining while prolife views are becoming more common. Now that I find interesting!

Keep spinning the "viewpoint inspired by christian morality is on the rise" narrative. Go ahead. Quote whatever poll numbers seem to confirm your argument and ignore the rest.

Meanwhile, even republican governors and legislators are backing away from enacting some of the most extreme anti-choice legislation seen in decades. Abortion violence attacks are on the rise, and measures intended to elinimate contraception are up for vote in state legislatures throughout the country.

Republicans don't even have any substantive issues that resonate with the majority of americans anymore, so they're doubling down on pandering to the extreme right wing christian conservative elements of this country. It's all a trick to get you to vote against worker's rights, social programs like medicare and social security, and tax breaks for the richest people in this country.

You pro-lifers are so easily manipulated that you'd support some of the most ayn-randian anti-christian economic policies just so that women won't be able to use contraception or have abortions. It's disgusting.

Right to life council, one of the largest anti-choice groups in this country, is comitted to doing nothing but defeating president Obama. If you actually cared about anything other than punishing women for their moral failings, the abortion issue would not be what determined your vote this november.

Besides, the only real way to get rid of abortions is to eliminate the causes or motivations for people to have them. If christians did not socially isolate single mothers or if there were more social services support for women who decide to have children, women would have reasons not to get an abortion without forcing anyone to do something against thier will.

It all boils down to the fact that christians treat women like social outcasts when they perceive a moral failing. These days, a christian would rather abolish welfare and social security and make abortion illegal than do anything to help anybody. They only care about the people in thier congregation, everyone else can go to hell.

It's all a trick to get you to vote against worker's rights, social programs like medicare and social security, and instead support tax breaks for the richest people in this country.

At what point did I mention women's rights or christianity?

Really? A flat denial, when the text is RIGHT THERE? You claim you did not mention Christianity or women's rights. ok. Here are a couple quotes (seems unnecessarily since it's a scroll away but I'll indulge):

"Keep spinning the "viewpoint inspired by christian morality is on the rise" narrative.

...pandering to the extreme right wing christian conservative elements of this country

You pro-lifers are so easily manipulated that you'd support some of the most ayn-randian anti-christian economic policies just so that women won't be able to use contraception or have abortions.

If you actually cared about anything other than punishing women for their moral failings....

If christians did not socially isolate single mothers or if there were more social services support for women who decide to have children, women would have reasons....

These days, a christian would rather abolish welfare..."

So if you don't count double mentionings in the same sentence, that's 7 times. In a 7 paragraph-er. But you know, 7 is only 7 away from 0 so I could see the mistake.

I don't know if you're purposefully dense, but keep it up. Makes it that much easier for us.

It had an agenda so I ignored it. said...

Seems like you're selectively ignoring the parts of my post that challenged your narrative of the abortion issue and chose quote me out of context.

Are you really so indoctrinated that you're incapable of reading anything that challenges your predjudice?