Why did people laugh during Roe v Wade?

[Today's post is written by Stacey Trasancos, originally posted on her blog, "Accepting Abundance." The article is reposted with permission.]

Have you ever listened to the Roe vs. Wade arguments?
I’ve heard about this conversation before, but it is even more chilling to listen to the words that were actually spoken in our courts 39 years ago. Mrs. Sarah Weddington, age 26, is thought to be the youngest person to win a Supreme Court case. The legality of abortion hinges on the “fact” that our laws do not recognize the unborn human as a “person” and therefore, the human has no constitutional right to protection.
Here are the recordings and transcripts. Click the play button on the Oral Reargument recording (the second one). The transcript below is from 20:40 to 24:40. Listen along, it's better heard than read. It's a piece of history, a tragic one. This is how it was argued that a mother has a right to kill her own child. With [Laughter].

Justice Harry A. Blackmun: But tell me why you didn’t discuss the Hippocratic Oath.
Ms Weddington: Okay.
I guess it was– okay, in part, because the Hippocratic Oath, we discuss basically the constitutional protection we felt the woman to have.
The Hippocratic Oath does not pertain to that.
Second, we discuss the fact that the state had not established a compelling state interest.
The Hippocratic Oath would not really pertain to that.
And then, we discuss the vagueness jurisdiction.
It seem to us that that– that the fact that the medical profession, at one time, had adopted the Hippocratic Oath does not weight upon the fundamental constitutional rights involved.
It is a guide for physicians, but the outstanding organizations of the medical profession have, in fact, adopted a position that says the doctor and the patient should be able to make the decision for themselves in this kind of situation.
Justice Harry A. Blackmun: Of course, it’s the only definitive statement of ethics in the medical profession.
I take it, from what you just said, that you’re– you didn’t even footnote it because it’s old.
That’s about really what you’re saying.
Ms Weddington: Well, I guess you– it is old, and not that it’s out of date, but it seemed to us that it was not pertinent to the argument we were making.
Justice Harry A. Blackmun: Let me ask another question.
Last June 29, this Court decided the capital punishment cases.
Ms Weddington: Yes, sir.
Justice Harry A. Blackmun: Do you feel that there is any inconsistency in the Court’s decision in those cases outlying the death penalty with respect to convicted murderers and rapists at one end of lifespan, and your position in this case at the other end of lifespan?
Ms Weddington: I think had there been established that the fetus was a person under the Fourteenth Amendment or under constitutional protection then there might be a differentiation.
In this case, there has never been established that the fetus is a person or that it’s entitled to the Fourteenth Amendment rights or the protection of the constitution.
It would be inconsistent to decide that, after birth, various classifications of persons would be subject to the death penalty or not but, here, we have a person, the woman, entitled to fundamental constitutional rights as opposed to the fetus prior to birth where there is no establishment of any kind of federal constitutional rights.
Justice Harry A. Blackmun: Well, do I get from this then that your case depends primarily on the proposition that the fetus has no constitutional rights?
Ms Weddington: It depends on saying that the woman has a fundament constitutional right and that the state has not proved any compelling interest for regulation in the area.
Even if the Court, at some point, determined the fetus to be entitled to constitutional protection, you would still get back into the weighing of one life against another.
Justice Byron R. White: And that’s what’s involved in this case, weighing one life against another?
Ms Weddington: No, Your Honor.
I said that would be what would be involved if the facts were different and the state could prove that there was a person for the constitutional right.
Justice Potter Stewart: Well, if it were established that an unborn fetus is a person within the protection of the Fourteenth Amendment, you would have almost an impossible case here, would you not?
Ms Weddington: I would have a very difficult case. [Laughter]
Justice Potter Stewart: You certainly would because you’d have the same kind of thing you’d have to say that this would be the equivalent to after the child was born.
Ms Weddington: That’s right.
Justice Potter Stewart: If the mother thought that it bothered her health having the child around, she could have it killed.
Isn’t that correct?
Ms Weddington: That’s correct.
Chief Justice Warren E. Burger: Could Texas constitutionally– did you want to respond further to Justice Stewart?
Did you want to respond further to him?
Ms Weddington: No, Your Honor. 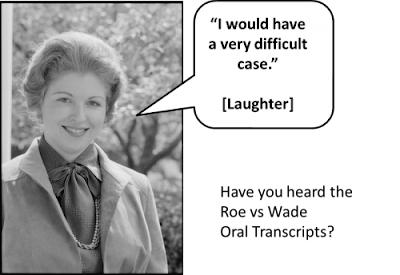 Posted by secularprolife.org at 10:02 AM

So come up with better solutions. K Thanks.

You care so much about the rights of the fetus, that's why women who get pregnant and don't want to have the baby need to be punished. (a supporter on the secularprolife facebook page literally said that women should be punished if they get pregnant) This is an example of the sick, thuggish attitude that pervades supporters of the "pro-life" movement. When they're not shooting doctors or firebombing clinics, harassing the children of people who support abortion providers, they're busy peddling anti-choice propoganda and lies.

Can't you just worship your jesus in peace and leave the rest of us alone? If you don't like abortions, then don't have one. (pro-life hypocrites change thier mind when they find out that they, too, are not interesting in being a parent).

Your "If you don't like abortion, don't have one" is lame. Think it through. "If you don't like wife-beating, don't beat one." "If you don't like child porn, don't make any." "If you don't like murdering toddlers, don't murder any." See how that works? You're missing the MAIN point for pro-lifers: we believe abortion is murder. It's not about punishing a woman; it's about taking an innocent life. Kind of like murdering a toddler. Whether or not you agree is not the point. It is a fundamental belief for pro-lifers that abortion is murder. Suggesting pro-lifers change this belief would be not unlike trying to promote toddler murder. It's pretty likely you would not agree that toddler murder is okay, and that no one could convince you that it should be okay if that toddler would somehow make a woman's life more difficult. Is telling a woman not to murder her child "punishing" her?