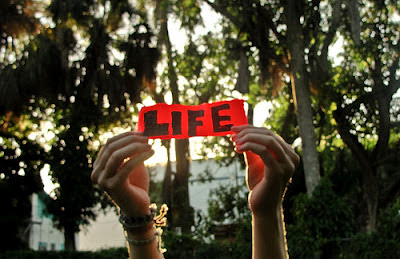 
I decided when I was thirteen that I was both an atheist and prolife. I became an atheist because I had no belief in a spiritual reality. I became prolife because my biology class taught a section about the development of the human embryo and fetus. I saw a human life as beginning at conception and stretching in one continuum until the death of that being. I saw that the inclusion of a child into society after birth (but not before) was nothing but a human convention.

Reed describes why an atheist, who has no belief in divine purpose or meaning, may find human life worth defending:


Possibly, the root of my reaction against abortion is one of self-interest and of self-identification. Aren't there many in this world who see me as less than human because I am a woman? Aren't there people who would deem me to be politically, socially, or ideologically "degenerate" and "undesirable" because of my atheism, bisexuality, desire not to be a mother, pacifism, or other personal characteristics? How can I demand my inclusion in humanity and yet deny humanity to another? What kind of gamble would I be taking if I allowed a dehumanizing custom to persist in my society without questioning it?

There are many other interesting passages, including her thoughts on human relationships versus abstract principle, the best ways to let ideas grow, how women she's known have been affected by unplanned pregnancies, and how those effects get overshadowed by the abortion debate.  Reed also considers the most effective (and ideal) ways to end abortion, naming off many methods of further empowering women so they would feel less inclined to abort in the first place.  Feel encouraged to read the entire piece.

Posted by secularprolife.org at 12:31 AM

"How can I demand my inclusion in humanity and yet deny humanity to another?"
Exactly. Thanks for sharing this!

To Kathryn if you're reading this - I'm a bisexual pro-lifer too. :)

This paragraph she writes really gets to the heart of it, what I think the objective of the pro-life movement should be.
"Who can deny the reality of their desperation? The women were willing to risk future infertility, death, pain, and criminal prosecution in order to terminate their pregnancies. This is not to say that abortion held no terror for them. It is just that the terror inspired by their other options was greater. I can say that this is true of every woman I have known who chose abortion for herself. One should wonder, then, not about how to talk women out of having abortions, but how to participate in society in such a way that no one would feel that abortion is the least of several evils.

Thanks for linking to it.

I hear they have a couple of black people at the tea party rallies.