"When the unborn baby is no longer unborn."

I have written previously about the emotional numbness that can come with arguing about any topic frequently enough.  I’ve discussed and debated abortion so often for so long that nowadays I find I tend to get angrier over egregious errors in logic than I do over flagrantly pro-choice mentalities.  I used to worry that this disconnect between my personal views and my raw emotions was a signal of a lack of conviction, but I’ve abandoned that concern.  As Sirius Black said (to geek out for a second): 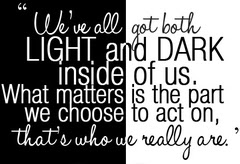 I don’t need to feel perpetual outrage to act according to my conscience.  Maybe I’m fortunate, because it’s a lot less exhausting that way.

Even so, every rare now and again I stumble across something connected to the abortion debate that does awaken those raw emotions that had settled somewhere in the back of my mind.  And, like the last time I blogged about this, the awakening seems to happen when pro-choice people candidly and fully recognize the humanity of the fetus, yet are unwavering in their pro-choice convictions.  It’s chilling.

In the great majority of my abortion debates, pro-choice people avoid any focus on the fetus whatever; they keep the conversation on the mother, almost as if there were no other consideration in the debate.  I don’t think most pro-choice people do this on purpose—for many of them there is no other consideration in the debate, and so they just don’t think about mentioning it.  When the fetus does get mentioned, the verbiage is usually clinical and impersonal (e.g. “products of conception,” “the pregnancy”) or, worse, antagonistic (e.g. “tumor,” “parasite,” “invader”).  This makes sense to me.  I can comprehend how someone who sees the fetus in such terms would be pro-choice.

What catches me off guard are quotes like this:

“[W]hile she is pregnant, her decision to have an abortion is like any other woman’s. How does this change when the unborn baby is no longer unborn—no longer inside her body?

I’ve talked with two wise people about this question. One said to me, ‘when the baby is inside the mother’s body, its death is birth control; after it is outside the woman’s body, its death is something else—maybe population control.’ He went on to suggest that we are, as a society, a lot more comfortable with birth control than with population control and that we might even consider the latter to be immoral.

The other wise person I spoke with suggested that we think about it another way. The pregnant woman went to Dr. Gosnell to ensure that she would not have her baby. She knew the baby would die. He did exactly what she asked, although not in the way (we presume) that she expected him to do it.”

The author of this quote, "Jeannie," insists "we should never deny that abortion kills an unborn child.”  She says, “Women know this, and they have abortions anyway.”

Blurred Lines
Crossed Lines
Our Truths
Posted by M at 9:03 AM

You could just change this site name to "republican wedge voter issue".com

Damn, you're a dreary scold, anon. Yes, we get it. You think SPL is nothing but some kind of Republican front group. We get it because you say that on every post and never engage with the contents of the post itself. Is this fulfilling for you in some way? Aren't you bored?

It seems to me that in the post you linked to, the blogger has looked at all the difficulties that pregnant women can face, determined that they can't be solved without resorting to death, and then decided that we need to get comfortable with death because that's just the way it is. It's certainly something that we do in other circumstances in our society -- as a society, we're far too comfortable with the deaths of citizens of countries we're at war with, of condemned prisoners, hell, even of *suspects* if a police officer feels subjectively threatened by that cell phone the suspect had in their hands. Comfort with the death of an unborn child feels even worse because normally we consider it a parent's job to *protect* their children, but it's all of a piece. If we weren't so comfortable with death, we'd have to make drastic changes in the way we deal with parenthood and women and crime and national security. But drastic changes are hard and frightening and might not work, so there's always the temptation to just make peace with death instead.

I'm with you in thinking that the vast majority of prochoicers in fact see a fetus as non-human, or pre-human. Some even sit uneasily, but securely on the fence of "I don't know, but killing a zygote doesn't seem as bad to me. Killing a 22 week fetus is maybe... but I just don't know. I won't judge"
I think women who acknowledge that they are killing are in the minority, but I do think they exist in numbers. They are people who have thought long and hard on the subject, but are in intractable circumstances, like the abortionist doctor quoted above. She can't think of the subject intangibly - she deals with it daily. It wasn't a one time shot, in the clinic and out, try to forget it ever happened. She can't deny her view on the humanness of the unborn, but that said, nor can she take the weight of guilt by associating that with what we collectively hold as morality in this modern age; that we shouldn't kill each other.
Can we really expect anything else from such a person? How would you feel if you had been laying around rat poison in your house for years, but as you thought it over, maybe got a pet, realized that animals might have a similar right to life that you do, maybe even new scientific studies show that rats have the same emotions as humans. Logically, you confirm, rats have as much right to life as humans. But you still don't want your food eaten. And when you accept that morally, it is wrong to kill rats, you have to take on that huge burden that for all those years you were being a terrible terrible person. (I am not equating a rat to an unborn, I am developing a scenario where practicality and the spectre of guilt trump morality)
But again, I think this is a huge minority brought on by particular circumstances. I wish she has answered the woman, considering an abortion, guilty about murdering her child, in a way that talked about that guilt, rather than saying it was just tissue. She might have done as good a job as any one of us at getting that woman to reconsider her choice.

Trolls are trolls, and maybe nothing can permeate their thick skulls that it is not a republican wedge issue (I'm a progressive! When it's an available option, I vote Green Party. I voted for Obama in 2008, though maybe I'll just sit 2012 out.) But maybe taking down links you have up there might stave some of that. Jill Stanek and #moronicprochoicequotes are pretty much everything that is wrong with the pro-life movement. They are, unabashedly, republican, christian, liberal-hating websites.

There's nothing wrong with being a Republican, Christian pro-lifer, anymore than there's anything wrong with being an independent atheist pro-lifer or any other combination you can come up with. Liberal-hating is another thing, though. What I like about #moronicprochoicequotes is that it truly does show the absolutely horrible things that various pro-choicers have said. As for Jill Stanek, I respect the sheer amount of time and energy she's spent on the movement, but I don't respect the way she seems bound and determined to highlight LGBT pro-choicers while ignoring pro-life LGBT people and insisting again and again that support for abortion and support for LGBT rights are intrinsically connected.

It's such a shame that the republicans are the only pro lifers. Wish more dems would see the 100% truth.

Marauderthesn, I completely agree, there is nothing wrong with being a Christian, republican and a pro-lifer. There are people of that category I even respect deeply. However, if SPL is attempting to forward and argument that being pro-life has nothing to do with religion, but with humanity, then links that support that argument would make more sense than links whose argument is completely different. There are a couple of interesting quotes on #moronicprochoicequotes, but the vast majority of them are just liberal bashing (not useful at all, even detrimental in the SPL debate), or using Christianity as a rationale for their being pro-life (irrelevant to the SPL debate).

Hear Hear Cletus Jason. The conversation has become nearly a religion, that people loyally defend, because that is what they were politically "born into". Liberals, progressives, care about others, they want to see other people who cannot stand up for themselves, be taken care of. It should be a natural thing that liberals be pro-life.

Early on in my pregnancy, I was facing a lot of outside pressure to terminate the pregnancy and sought the counsel of a social worker in order to figure out the best way to deal with the situation (I'm keeping it, and feeling good about it, but the judgemental attitude people have to single women who don't terminate is still kind of distressing).

Part of the discussion was about potential mental health outcomes of terminating a pregnancy, and how it was very much dependent on the emotional relationship a woman had with the foetus. Some women instinctively view the foetus as "their baby" (and, unsurprisingly, they tend to have a negative psychological reaction after an abortion) but other women only think of themselves as being in a condition of pregnancy and don't have any kind of bond with the foetus (they tend to do well after abortions).

In general it seems like pregnancy is a very personal and highly emotional experience for the mother, and as a pregnant person I think I can appreciate that my own relationship with my unborn child has a significant effect on my views about abortion -- and while abortion is personally abhorrent to me and I can't empathise with the viewpoint that it is an acceptable option under "normal" circumstances, it does make sense that women who don't have the same emotional connection would feel that way.

I don't think the intensely emotional and personal nature of pregnancy should be underestimated.