The Abortion Queen in Mississippi 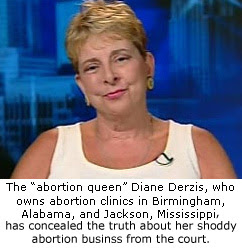 Mississippi recently passed a law requiring that abortionists be OB-GYNs with the ability to admit patients to a local hospital if necessary. This new law has come close to shutting down the last abortion clinic in Mississippi which is owned by Diane Derzis -- also known as the ‘Abortion Queen’.

The ‘Abortion Queen’s’ clinic has been all over the news today because she has filed a lawsuit seeking to stop the new law that puts women’s safety at the front of the issue. She insists the law is unnecessary and could drive her out of business.

After doing some research I discovered this so called ‘Abortion Queen’ is actually a familiar face. Last year while in Birmingham, Alabama I met the woman outside her clinic (which is now closed) as I was part of a group that re established peaceful prayer and life affirming counseling on the public sidewalk in front of one of her then three clinics.

The woman was shocking to say the least. She stood infront of her clinic yelling and singing in a floor length fur coat.

While the ‘Abortion Queen’ has spent many years in the industry and continues to fight to keep her businesses running, she brings hope to those who work within the pro-life movement. She made the following comment to the Associated Press:


"They're going to keep coming back. They're not going to be satisfied until they (pro-lifers) have driven us out of business.”

I think everybody can see that. She’s absolutely right, and would know from first hand experience.

So while things may be overwhelming and we feel like abortion continues to become a bigger monster, I encourage you to remember that life affirming laws are being passed, clinics are being closed, and those in the abortion industry are getting sick and tired of the persistence of pro-life advocates.

Continue to fight the fight and put on the pressure and you will continue to see clinics closed; but more importantly lives saved and women not subject to such degrading and unsafe ‘reproductive care’.

Posted by Timmerie Millington at 7:41 PM

Sometimes poo poo comes out and you know they eat the poo poo like ice cream said...

Get it? It's like a Welfare Queen except for abortions!

Another quality SPL post brought to you by the tea party.

Thank you for the post. Abortion and the reality of it needs to be shown on the nightly news and the front page of the papers. The reality should not be hid behind closed doors and darkened windows any longer.

Thank you Timmerie, your posts tell the 100% truth to the american people. One day americans will wake up and see that destruction caused by abortions and socialism. I pray for the days of George Bush to come back when we had a republican in the white house and we only had to worry about the arabian terrorists, not the terrorists in our own country.