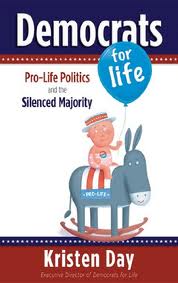 Currently the democratic platform’s party states its unequivocal support for Roe v. Wade and says, “we oppose any and all efforts to weaken or undermine that right.” However, some democrats in the party have recently suggested, at a committee meeting, that the language should be changed to allow some diversity of opinion on the issue within the party.

Part of the reason for allowing the open stance on life is out of fear of losing more of the House and the Senate in the 2012 election. Members of the party believe it would be advantageous, especially considering a recent Gallup poll where 44% of democrats shockingly said they thought abortion should only be legal “in a few circumstances”.

The efforts to acknowledge respect for human life to the party platform have been shut down for the most part; however, it will be interesting to see what the party decides down the road since ultimately they are politicians who need the votes and if society continues the trend of becoming more pro-life this may have a significant impact on the party. In the meantime President of NARAL Nancy Keenan, who is on the committee discussing the proposed changes to the party platform, has been quick to push for maintaining the unwavering pro-abortion position for the democratic party.

Timmerie
www.Timmerie.com
Posted by Timmerie Millington at 11:09 AM

Romney: Funded a fetus disposal company and made millions.

Which candidate is more pro-abortion?

-unlimited access to abortion on demand for any reason

-prevention of gender discrimination abortions (the Real War on Woman)

-involving his young daughters in the abortion debate (beyond creepy). Here is the exact quote, "I am going to teach them first of all about values and morals. But if they make a mistake, I don't want them punished with a baby."

Any candidate is more pro-life than Obama.

Romney changed his mind. Some are skeptical of his conversion, but I sincerely hope it's genuine. After all, Norma McCorvey (aka Jane Roe), Ronald Reagan, and Abby Johnson are all pro-life converts as well, and many others besides.

Obama, on the other hand, remains staunchly pro-choice. Here is a link detailing Obama's record on life issues from the election up to April of 2012. http://www.lifenews.com/2010/11/07/obamaabortionrecord/

This doesn't include anything prior to November 2008. While he was a Senator in Illinois, he voted 4 times-in committee and on the senate floor-against Born Alive Infant Protection legislation, which mandates that living, potentially viable infants who have survived a botched abortion be given medical care. Supposedly this was because it was an anti-abortion bill, but it was not. The bill only required that ALREADY BORN, living infants be considered people, and be taken care of, rather than being dumped in a closet to die.
He also verbally opposed the Partial Birth Abortion Ban. He said this was because there was no exception for the health of the mother, however, the bill stated that someone who broke the law could seek a hearing to explain why the procedure was medically necessary. AND Congress found that the procedure was medically UNnecessary to preserve women's health. Even by the standards of abortion procedures, partial birth abortion is barbaric, and it’s wholly unnecessary.

If Obama suddenly saw the light and changed his mind, I wouldn't be happy about his past, but it would still be just the past. I would be thrilled to have him on our side, and I would admire his courage at admitting he was wrong. Romney may be a convert, but I'll take a convert over someone who still advocates the "right" to abortion on demand, at any point during pregnancy.

Sorry to basically repeat what you said...your comment didn't show up when I posted mine. But yeah, if anyone is out of touch with the mainstream-even mainstream pro-choicers-it's Obama.

If Bernard Nathanson, one of the leaders of the abortion movement, who once said ‘I am one of those who helped usher in this barbaric age’, can be converted to the pro-life movement, there is hope that other staunch pro-abortionists can be as well.

His following quote is quite motivating to me:

“Abortion is now a monster so unimaginably gargantuan that even to think of stuffing it back into its cage … is ludicrous beyond words. Yet that is our charge — a herculean endeavor.”

On behalf of the million babies killed every year, we have to work together and not give up, regardless of politics or any other dividing factor.

According to poll data (which has it's faults, admittingly), about 1/3 of Democrats are pro-life. They just need to speak up, not be afraid, and use their voice.

No worries Emily! I think that the natural inclination is to be "pro-choice", as "choice" is such a nice sounding word. Who doesn't like choice? I certainly do (in most matters).

However, when I started to look "under the hood" at abortion, it became apparent to me how unjust this practice is for pre-born children. I am not religious, so this is a human rights issue for me.

Also, my wife recently gave birth, so during her pregnancy, seeing the ultrasounds, feeling the baby kick, it was apparent that what was growing inside her was much more than a 'clump of cells'.

These factors quickly converted me from 'pro-choice' to 'pro-life'.

You're all a bunch of easily manipulated tools if you think Mitt Romney is pro-life.

He'll say anything to get elected.

This just shows you how easily Republicans can be duped into voting for whatever empty suit is running against Obama this november.

Go ahead and vote for the same party you've been voting for your whole life, People like you are the reason the Republican party is so terrible these days.