2012 has been a big year for Secular Pro-life!  First we (Kelsey, Michael and I) made a big opening splash with an info table at the American Atheist Atheist Convention in DC at the end of March.  Then two months later I got to network over drinks with several leaders of the humanist community at the American Humanist Convention in New Orleans (they surprised me with their sincere curiosity to hear the secular pro-life case).   Following these two exposures, a number of publications requested to hear from us with quotes from the secular pro-life community (The Humanist  and Poleitica come to mind at the moment, though I think there was at least one more?)  My letter to the editor is set to appear  in The Humanist's Nov/Dec edition following their less than flattering portrayal of SPL, and full-length feature article summarizing our side of the issue is still pending publication.

It's now October and I've just finished my first ever public debate against atheist celebrity Matt Dillahunty, president of the Austin Atheist Community and host of the nation-wide televised call-in show The Atheist Experience.  Matt is an experienced debater and public figure and our audience was the 400 attendees of the Texas Freethought Convention.  To say I was nervous would be putting it far too mildly!

I'll confess that I'm not entirely thrilled with my debate and know I have room for improvement.  I couldn't sleep the night before, I had difficulties with my powerpoint, my computer failed to save my opening and closing scripts, forcing me to work almost entirely ad-lib... I had honestly planned to chalk up the whole experience to a good learning opportunity and figured I'd share my video with only a handful of supportive friends who could help me improve for next time... buuuuut it seems the atheist community had other ideas.  :)   In the two days since Texas Freethought  Convention posted their video, the debate has gone VIRAL.   Last I checked the video had 15,000 views - in TWO days!

So since everyone else has seen it, y'all may as well see it too:

Feel free to message me with feedback on points you think I nailed and points that left you scratching your head wondering what the heck I was thinking.   I'm open to doing even better next time.
:)

It's been a big year - and 2012 isn't even over yet!   Following the debate, I received a number of opportunities to present my case again at a later date.  I've been invited to participate in two secular podcasts, including one set to take place in Dallas on November 14th.   The podcast will be a live debate with a feminist who is flying in from California just to engage with me on bodily rights arguments!  I'm also in discussion with the Texas director for the Secular Student Alliance who will try to book me to speak at one of STA's regional events some time down the road.

And as for debates?   A second debate between Matt and I is already being discussed for the new year, hopefully somewhere up north next time.    I can't wait!  Now that I've gotten my feet wet with my first debate, it can only get easier from here, right?   :)

So a great big thank you to all of you who have made financial contributions to make this important work possible!   As atheists, we don't have access to church funds like a lot of our religious pro-life friends do, so we count on you who believe in what we're doing, in order to be able to keep doing what we're doing.   If you're not already doing so, please consider making a monthly contribution to the work of Secular Pro-Life.

2013 is just around the corner and we hope to be able to attend even more events and travel to more functions to speak to willing audiences.   Your support goes a long way!  Thanks! 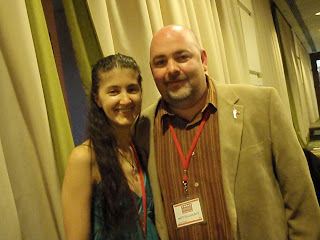 Myself with Matt Dillahunty after our debate
(Matt wanted to be clear that our photo op
"doesn't mean we're buds now")  :) 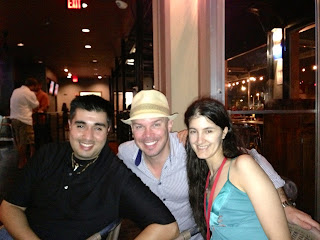 Daniel (my wonderful chauffeur, assistant and friend),
Paul (the awesome TFC organizer who agreed to host the debate at his event), and I
Posted by Kristine Kruszelnicki at 7:47 AM