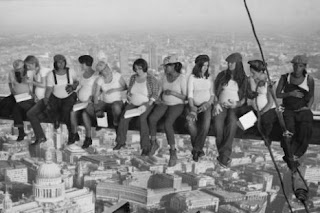 The Pregnant Workers Fairness Act (PWFA) is an Act intended to ensure "reasonable workplace accommodations for workers whose ability to perform the functions of a job are limited by pregnancy, childbirth, or a related medical condition."

The Huffington Post describes the types of women that could be helped by this legislation:

When Heather Wiseman began to suffer from bladder infections as a result of her pregnancy, the Walmart sales associate started carrying a water bottle during the day to stay hydrated. But the Walmart that employed Wiseman technically allowed only cashiers to have water bottles, and a note from Wiseman's doctor made no difference. Caught with a water bottle again, the pregnant Wiseman was fired from her job in 2007 for insubordination based on her failure to follow the water bottle rule.
Another woman, Victoria Seredny, was told not to move heavy objects -- something she did a few minutes a day in her job as a nursing home activities director -- by her doctor after a near-miscarriage. When she asked for help, she said her boss refused to allow her colleagues to assist her, even those who volunteered. Serendy was fired soon after for failure to perform her duties.

The National Women's Law Center describes these and a few other cases of pregnant women struggling to continue working while pregnant.

The Huffington Post explains that the Pregnancy Discrimination Act of 1978 makes it illegal to fire a woman just for being pregnant.  That doesn't mean, however, that employers must accommodate a woman's pregnancy-related needs.  The PWFA looks to correct that.

Politicians that oppose the PWFA argue that it would place unnecessary burdens on businesses. For example, businesses would have to find ways to accommodate pregnant employees whose jobs include a lot of physical activity, such as repetitive motions or lifting heavy objects.

It's worth noting, though, that the PWFA does not apply if "the accommodation would impose an undue hardship on the operation of the business." (In this context, "undue hardship" is based on the definition used in the Americans with Disabilities Act.)

It's also worth noting that several states (Connecticut, Hawaii, Louisiana, Alaska, Texas, Illinois, and California) already have legislation that calls for accommodating pregnant workers. According to Time magazine, California passed legislation in 2000 that guarantees pregnant women the right to job-protected leave and to be transferred to another position if medically necessary.  Since then, California's pregnancy discrimination cases have dropped (currently averaging at just two cases per year). For reference, federal pregnancy discrimination cases have increased by 54% in the same time period.

Addressing this sort of problem, in my opinion, is a great strategy for right-to-lifers.

Absolutely, these examples are no-brainers. (And I'd be very surprised if they weren't already covered under existing law.) My concern is, what *else* does this law cover?


To paraphrase, when the government starts talking about "fairness", I reach for my wallet with one hand and the Bill of Rights with the other.

I am Victoria Serednyj, now Szmall. I was perfectly capable of performing my job. The only thing I needed assistance with were a few dining room tables being shuffled around for bingo a few times per week and my co workers knew when this was and would come down to the dining room on their own and move the tables for me. I suffered a miscarriage that December.mmy daughter was a twin and I miscarried at work during a Christmas program at the nursing home. I miscarried two days after I found out I was pregnant. Then a few weeks later I found out I was still pregnant and my doctor kept doing tests and bloodtests to monitor me and make sure my numbers were going up instead of down. That February I started having complications with my daughter and almost lost her too and was put off of work for a few weeks for hormone therapy and bed rest because the I had already started to miscarry they found out via ultrasound. My progesterone levels were dangerously low. Once they got enough progesterone in me, things started improving and was okayed to go back to work, so I did and did my normal duties and then started having problems again, only this time, my doctor just wrote me a note that he wanted me on light duty to ensure I just didn't lift for a few weeks until the problems resolved. At that point, my boss was already hassling me before I even got a note for light duty and would not allow my coworkers to volunteer to help with the tables, so they would sneak down to the dining room when she was not around, and help and hurry back to their areas. Once I got the note from my doctor, I was fired on the spot and when it came time for the depositions, my boss lied and had other employees lie for her saying that I quit and created a stir in the lobby saying I was done with this place. I loved my job! I worked in nursing homes since I was 17 years old! They were a little red faced when I produced the document signed by the same human resource that lied about me quitting that stated I was fired. This was all under oath. I lost my case and I expected I would, but all I wanted was to keep my job and not be hassled for a few people helping me move a few tables while I was having complications and was still doing my full job. I wanted the law to change. Hopefully that will happen. Part of it already has and that makes me happy. I just had the balls to do what a lot of other pregnant women are/were scared to do. I knew I was one up against a huge company. It didn't change my situation but it hopefully will for many other pregnant women and prevent employers from doing to them what they did to me. Karma always comes around though. Shortly after I lost my case, my boss that fired me and lied under oath, was fired from the company herself. Everybody gets what they deserve eventually.