Thoughts on polling and labels.

Even as Planned Parenthood moves away from the "Pro-choice" label, more Americans are adopting it. Again.

According to Gallup 48% of Americans describe themselves as "pro-choice," compared to 44% who describe themselves as "pro-life." Yet only last year Gallup reported a record low number of self-described pro-choicers (41%, compared to 50% "pro-life"). That's a lot of fluctuation, and (again according to Gallup's trends) the labels have been fluctuating for several years now.

Depending on which way the percentages move, one side of the other will emphasize the poll and talk about long-term, big-picture changes in the never-ending national abortion debate. Maybe they're right, but I don't think we can really see that from these polls.

Labels like "pro-life" and "pro-choice" are not as well-defined as abortion activists like to suggest. I suspect people's reasons for choosing one label or another have to do with a lot of factors beyond their perspective on abortion specifically. For example, some pollsters suggest recent changes may be due to ignorant Republican comments about rape and pregnancy, or due to last year's contraception debates. I also suspect adherence to pro-choice and pro-life labels have a lot to do with how people feel about the Democrat and Republican parties at a given time, even if their feelings about the parties change due to topics other than abortion.

And of course there's a lot of ambiguity about what the terms "pro-choice" and "pro-life" imply. To my mind, a pro-choice person is someone who believes, at minimum, that women should be able to get abortions for any reason during the first trimester, and for severe reasons (rape, life/health of the mother, fatal fetal abnormalities) in the second two trimesters. A "pro-life" person is someone who believes, at minimum, that abortion should be illegal throughout all stages of the pregnancy except for those severe reasons. There are more "pure" pro-choicers and pro-lifers who may argue that the above definitions compromise too much, but my point here is not ideological purity. I'm trying to summarize what I think the majority of people in the abortion debate would consider "pro-choice" or "pro-life."

Yet I've met people who think that they are technically pro-choice because they believe in exceptions for rape and life of the mother. And I've met plenty of "personally pro-life" people who think abortion is a necessary evil that should be legal. How do people like these respond to polls?

Meanwhile, as Secular Pro-Life has pointed out, a recent Pew Research Poll found only 62% of adults knew Roe v. Wade was about affirming a woman's right to an abortion. In fact, 17% of adults thought the case had to do with school desegregation, the death penalty, or environmental problems. I don't really blame them--if you're not passionate about abortion I can understand not knowing anything about Roe v. Wade. I'd be hard-pressed to name a landmark SCOTUS decision about the environment.

Still, I wonder how much national ignorance plays a roll when Gallup asks people whether they thought Roe v. Wade should be overturned (53% said no, 29% said yes, and 18% said they don't care).

It's also interesting how the "pro-choice" and "pro-life" demographics break down: 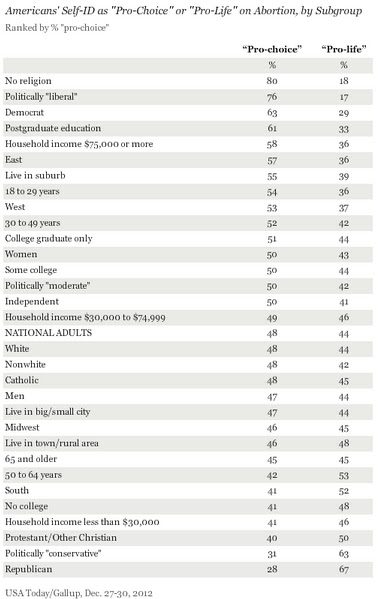 Having no religion is the biggest predictor for being pro-choice--bigger, even, than being liberal. Note, though, that the intense correlation doesn't cut both ways: 80% of the nonreligious are pro-choice, yet only 50% of non-Catholic Christians and 45% of Catholics are pro-life. In fact, more Catholics called themselves pro-choice than pro-life! And yet we're allegedly a Catholic movement?

73% of liberals and 63% of Democrats call themselves pro-choice. 63% of conservatives and 67% of republicans call themselves pro-life. I never have been that clear on the distinctions between liberal/Democrat and conservative/Republican. They seem to generally follow the same polling trends. In any case this still leaves roughly 1/3 of Democrats who don't consider themselves "pro-choice" and 1/3 of Republicans who don't consider themselves "pro-life." If the labels weren't so strongly associated with specific political parties, how might that change peoples' self-descriptions?

The more college education a person has, the more likely they are to say they're pro-choice. Other polls have shown the more college education a person has, the less religious that person tends to be. And it's no surprise that education is positively correlated with income. In other words, while it's clear that education and the "pro-choice" label are correlated, it's not clear whether (a) increased education causes people to be pro-choice, (b) being pro-choice makes it easier for people to increase their education (how many women cite disruption to their education as a reason to get an abortion?), or (c) being pro-choice and being well-educated are both correlated with some third causal factor, like being non-religious.

I think this factor surprised me the most. According to Guttmacher, 73% of women who get abortions cite financial problems as a major reason. Yet the less income a person has, the less likely they are to say they're "pro-choice." I'm not sure what to make of that. Thoughts?


I would love to see a poll that asks more about the legality of abortion, and less about labels. It should also ask not just whether abortion is moral or immoral, but why respondents think it's moral or immoral. Maybe that would shed more light on the national perception of the abortion debate.

First, with regard to the income difference, I'm inclined to point to elitism. It's easy for rich people to say that they're pro-choice "for the benefit of the poor" when they don't have to deal with the consequences of abortion in their own high-income communities. And I'm sure low-income people aren't thrilled by the implication that they're "better off dead."

Second, the chart strikes me as very inconsistent with other polls when it comes to age differences. Many surveys (including past Gallup surveys) have found that the 18-29 age group enjoys a pro-life majority or plurality. There's variation, of course, but to go from that to young people being the most pro-abortion? That's a big outlier, which makes me wonder how reliable the rest of the year's results are.

I'll just comment on education and income, since the rest has been more or less hashed out before. It is actually well known that those with higher incomes generally have more liberal views on morality. This has more or less always been the case, I think. I would say both level of income and education are tied to the tendency to go with prevailing intellectual trends. Today, this includes rejecting religion, and it also includes things like being pro-choice on abortion.

It's been said before, but perhaps not enough by pro-lifers: abortions are often had by people who are pro-life. There is a difference between those who support abortion and those who find themselves having one. You will find many pro-choice advocates insisting on things like sex education, and I suspect there's good reason for that. The wealthier and smarter you are, the more likely you are to be savvy about contraception and birth control.

Think about how many pro-life advocates there are who are advocates precisely because they regret their abortions. Probably they had abortions in the first place due to extenuating circumstances, including financial ones. So again, who has the abortions? Well, whoever they are right now, they may very well become pro-life.


I'd like to make the case that ultimately what will steer our laws in a more pro-life direction is changing the intellectual atmosphere. In my mind, categories like "politically liberal" don't have any sort of steady meaning, but they follow whoever has the intellectual hegemony during a given era. If the pro-life movement produces only activists and never any active thinkers, we will lose in the long run.

I suppose you could have the exact same percentages of pro-choice women across all income levels, but then if you vary knowledge of and access to contraception, you'll still get more abortions at lower income levels. Is that one of your points?

About the religion aspect... It is called a "Catholic" movement because Catholicism teaches that abortion is wrong in all circumstances and has lead the fight for the last 40 years. But it is a fight for all people of good will not just religious. Being anti-abortion is in the Catholic Catechism and is an unchangeable part of the religion. It also doesn't distinguish between those who call themselves Catholic because that is what they were baptized as and those who actually practice the religion and know what is means to be a Catholic same with other Christians. With the stat that only 25% of people who call themselves Catholic actually practicing the religion I think that stat is skewed.

access to and knowledge of BC is not really a factor. In fact the more birth control in an area the more abortion is commonplace. The mentality is what needs to change. Besides people of lower incomes tend to be more moral and religious hence the lack of birth control and openness to having children.