Can I be a feminist too? 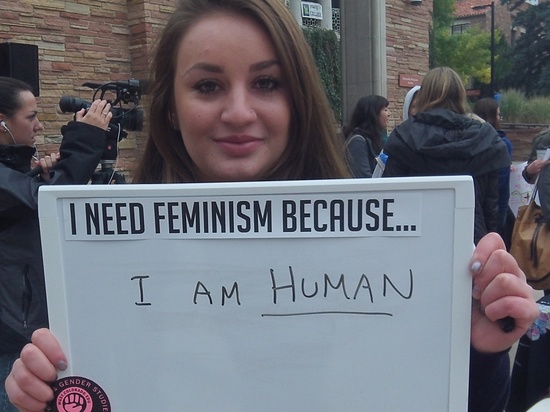 I consider myself a feminist. I’m a big proponent of women going to college and building their own careers (and I’d like to see more female scientists). I’m very big on a balance between our relationships and the rest of our lives; you should not be made or broken by whether you're single or dating or married. I think society concentrates far too much on our looks, too little on our minds. I’m a huge advocate of expecting and demanding respect from others, particularly from romantic interests. I believe empowered women include women who value themselves, and expect their partners to value them as well. Cruelty, indifference, derision, dishonesty—I hate seeing people tolerate poor treatment, especially due to a fear of being single. I also hate victim-blaming. I’m grateful my boyfriend, brothers, and guy friends understand that the standard is not "it's okay as long as she doesn't say 'no'" but rather "it's not okay unless she says 'yes.'" I’d love for a lot more people to understand this.

I consider myself a feminist. I’m humbled by the women who’ve gone before me, who helped create the opportunities I enjoy today. I’m proud of and inspired by the women who fought for my ability to vote, get an education, own property, access birth control, serve in the military, hold political office, stand up to sexual harassment, graduate from college, and on and on. I feel grateful to modern role models who speak out against ridiculous body expectations, or sexual expectations, or what have you.

I consider myself a feminist and my heart and mind go out to fellow feminists in many respects. I'm glad to be a part of our movement toward equality, making the world better for my daughters. I feel a kinship with the men and women who also work toward that goal.

But then we turn to the topic of abortion, and suddenly I’m shoved right out of the feminist movement and into an ill-fitting stereotype. Apparently pro-life women hate sex and (simultaneously, somehow) think women have a duty to procreate. Apparently, because I'm pro-life I don’t believe our gender can or should make our own decisions. Supposedly I don’t think women should have their own educations, careers, or lives outside of the kitchen (or the bedroom). I'm told I don’t even care if women die. I'm told, in fact, that I hate women, including myself. All of the gender issues I care about so deeply are a farce, smoke and mirrors to hide my backward, misogynistic, sinister agenda of reducing my gender to a bunch of baby incubators.

In reality, I'm pro-life because I believe the non-defensive killing of other human beings is wrong. How sad that this perspective is enough to destroy my credibility as a feminist.

The truth is I think women should have control over their bodies, and that their sexual decisions should be their own. I think consenting adults should be free to have sex with whomever. I'm glad we live in a society in which birth control is legal and common, and I'd like to see better sex education so more people will use birth control effectively. I really dislike the double standards society has regarding men and women's sex lives. (For example, the phrase "man-whore" irritates me because it seems to imply that normally women are "whores," so in this case we have to clarify.) I can't stand the "slut vs. prude" dichotomy, as if women can only be one or the other, and we sure can't win either way.


I also don't believe anyone has a duty to procreate, and I would love it if no one got pregnant who didn't want to be pregnant.

I do believe, though, that once a woman is pregnant, things have changed. I see a huge moral difference between preventing a pregnancy and terminating one, because I recognize the human fetus as part of our species, warranting protection.

I don't take this position lightly. I understand how dramatically pregnancy, childbirth, and child-rearing alter women's lives. Indeed I think part of feminism is transforming society so that procreation doesn't affect women so disproportionately. We need better maternity leave and childcare options. We need to break down stigmas surrounding single, student, and working mothers. I'd love to live in a society where employers understand that supporting their pregnant and parenting employees means supporting productive citizens and healthy families. If our society had better support for pregnancy and child-rearing, I believe less women would feel compelled to choose abortion in the first place.

But in any case, I reject the idea that only when women are able to have their offspring killed can we have the same opportunities as men. If that's equality, it's an abysmal form.

I consider myself a feminist, and I'm pro-life. I know I'm not the only one. 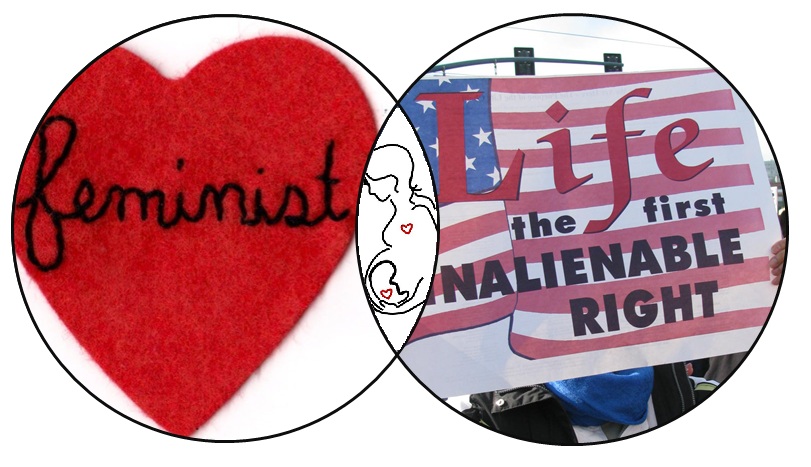 I totally hear you. I have been treated the same way by other feminists, and it truly baffles me. Thank goodness for organizations like Feminists for Life, among others.

I am a feminist too, and an atheist (with no moral compass they say). I am pro life 99% of the time. I believe that something's potential gives meaning to its existence.

Under what other condition would you allow a person to confiscate someone's body parts against that person's will, to save someone else's life?

If the sex act was consentual that started the new life in the womb and the two that participated in the act of sexual intercourse new that conception was a possibility, even with contraceptive use, there is no "confiscation of body parts". Conception is a natural act resulting from intercourse. That is biology and science.

The fetus cannot "confiscate" anything. A fetus has no power at all, nor is the fetus an invader since the uterus serves no other purpose than to carry offspring, planned or not. The womb or uterus is where the fetus should be, where the fetus belongs. It is the fetus' rightful place. Where else is a fetus supposed to reside?

"planned" or not, the pre-born exist in reality and biologically. They need to be accepted as members of the human species, not demonized as the KKK tried to demonize any non-whites as inferior.biologically to caucasions.

So... you're a feminist until the woman is pregnant. Then she doesn't matter any more. Classy.

It doesn't matter what some personhood proponents claim; only the facts matter.


Is in un-feminist to believe that women and men should be held accountable for their actions? Is killing someone a proper way to dispose of your obligation as a parent?

Get off your podium. Aborting a pregnancy is not the same thing as murdering a human being. Fetuses are not human beings. The law does not afford fetuses the same status as people and neither does the bible. I've had it with your disingenuous assertions. Feminism is about liberating women from gender socialization, not reinforcing traditional gender hierarchy. If you think that women need to pay for what they've done then you're not really much of a feminist. This is almost as bad as someone who "isn't a racist" talking about how much interracial marriage makes her feel uncomfortable. The fact that you thought you could make this argument in the first place shows you how little you know about feminists and feminism.

" Fetuses are not human beings."

And there you have the crux of your argument, which is easily demolished by both logic and the scientific study of unborn human beings. Read a textbook.

"If you think that women need to pay for what they've done then you're not really much of a feminist."

How exactly does it follow that being responsible for your family and children equates "paying" for sex? The problem isn't the child - it is the social structure which disproportionately affects mothers. The solution isn't to kill their children - the solution is to create a culture which welcomes children and helps mothers in anyway possible (ex: paid maternity leave, low-cost daycare, part-time degrees, flexible working hours, etc) after all, a society which invests in its children invests in EVERYONE since every member of society was once a child.

Do you know what a human organism is?

That was, well, beautiful.


"I reject the idea that only when women are able to have their offspring killed can we have the same opportunities as men. If that's equality, it's an abysmal form."

That pretty much sums it up. Thank you for writing this.

So....you may want try working on your reading and comprehension skills before replying to another post on this blog.
This is an opportunity to educate yourself on what pro-lifers truly believe. I would take advantage of it, so as to make yourself look less foolish in the future.

.....Abortion IS the killing of a human being.

If you do not understand these simple concepts, then you may want to study a biology textbook.

The writer of this post understands feminism just fine. The difference between her and many of those who call themselves feminists (like yourself) is that she has an understanding of basic biology. Plus, she understands that there is nothing feminist about supporting the killing of unborn females.

It is nice to hear a woman articulate the fact that feminism does not have to equate disdain for the beauty of the powerful gift we have thing that men do not, the ability of our bodies to conceive and bear human life.

You can be otherwise intelligent and still hold an abysmal view. I don't think all so-called Pro-Life women are evil, but when you chose to drive legislation that reinforces the notion that women do not have the right to bodily integrity unless it’s for a reason said "Pro-Lifer" sees fit, that is not congruent with feminism. That’s like saying you are pro-gay-rights but against gay marriage.

Let's say a woman uses a futuristic super glue that wont break down for nine months unless its attached to a dead corps and glues herself to her child. Then she realizes that wasn't a good Idea and she no longer wants this child attached to her, is it okay if she kills it? I mean, why not? That child is using her body against her will isn't it? and killing it will cause the glue to attack the dead cells, loosing its grip on her so that would solve her problem.

How can you call yourself a feminist if you allow a patriarchal system to attack the core of womanhood?

Here's the thing: banning abortion doesn't decrease the numbers, it just makes it much more dangerous. Currently, roughly 47,000 women die annually as a result of illegal abortion in those countries where safe, legal ones are unavailable. I'm sorry that someone told you that you "don't care" if women die; of course you do. But the reality is that a ban on abortion will result in more injured and dead women. I'm sorry that makes you feel bad, but you need to own it.