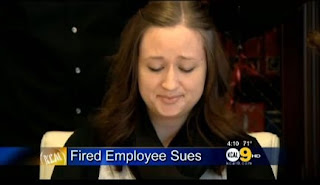 Background: A former employee at San Diego Christian College (SDCC), Teri James, 29, was fired for engaging in premarital sex. She was pulled into her supervisor’s office, asked if she was pregnant (she was), and then let go. Despite signing a contract which included a provision agreeing not to engage in “sexually immoral behavior including premarital sex,” Teri is suing.

What’s rich about this story: SDCC then offered the job to her now-husband, even though they were aware he had premarital sex as well.

I understand wanting employees who can serve as role models, especially in religious schools where the code of conduct is held in high regard. And perhaps Teri won’t win the suit because of the contract she voluntarily signed. But still the question remains: are “lifestyle contracts” that tie pregnancy to your career and finances a good idea from a pro-life perspective?

Teri said, “I was unmarried, pregnant and they took away my livelihood.” This disturbs me. Because of her pregnancy, Teri was stigmatized and she lost her job. That’s not exactly a “Choose Life!” message, is it? If we aren’t going to actively help pregnant women in need, we could at least try not to hurt them. And does anyone else see the irony in throwing pregnant women under the bus in the name of setting a good example?

That’s assuming example-setting was the true reason for Teri’s termination. In a Florida case last year, the court determined that a school may have fired a woman not because she got pregnant while unmarried, but because the school didn’t want to find a replacement for her while she would be on maternity leave. Considering SDCC hired Teri’s fiancé right after firing her for premarital sex with her fiancé, dodging maternity leave costs seems all the more likely.
But let's assume the school is truly concerned with the example Teri has set. In that case I ask you: is it more pro-life to discourage premarital sex or to encourage support of pregnant women?
Posted by LN at 9:49 AM

From a Christian school perspective? I have no idea. But I find it really odd that they fired her for premarital sex (fair enough if she signed the contract but still ...) but then hired the man who she engaged in sex with. Doesn't make much sense.

Yeah, offering the job to the guy...that is pretty rich. Pretty outrageous, actually. You have to wonder what that meeting was like.


Lifestyle restrictions for employment...I'm thinking more and more that they simply shouldn't be recognized under law. That is, outside of a workplace your employer shouldn't have any power, if even if you "signed a contract." Not all contracts are legal, and I'm thinking that's one that shouldn't be.

Well this is interesting. She did sign a contract not to engage in premarital sex so she broke the contract and they had a right to fire for that reason. But to hire the man who also engaged in premarital sex is hypocritical for sure. Also, it would encourage the women who get pregnant to abort. Lose, lose situation.

Well it it's OK for the man but not the woman it seems that moral behavior is not their prime interest. And importantly many Christian institutions who claim to be "pro-life" are encouraging abortions because an unmarried woman who gets pregnant knows she has to choose between her child and her job.


One can understand a desire to have employees in a ministry who reflect the values of the ministry. But when that becomes a legalism which trumps the "love your neighbor" commandment, it becomes questionable. And (beyond the pro-life aspects here) the effect of a legalism on something like this, where in most instances the employer simply wouldn't know about a violation of the code, is to encourage secretive behavior.

I'm hesitant to give the state too much control over what ministries do to try to keep themselves consistent, but here there's pretty strong evidence that this is straight discrimination against pregnant women.


As guidance for ministries which are pro-life, I say always be loving towards pregnant women.


1. Firing and refusing to support her = not pro-life.
2. Firing her for slipping up and engaging in premarital sex = not very Christian. We all sin; the question is, how does she respond to it? (Let he who has never sinned be the first to throw a stone...etc.) Your reason for being chaste should be love of God, not fear of losing your job.
3. Hiring her now-husband even though he fathered the baby = GROSS. Way to show us that you believe a man's part in pregnancy doesn't matter and women are always the sinful ones. Why should she pay the heavier price?

If only she had an abortion, then she'd have been able to keep her job because the employer wouldn't have found out about the pregnancy.

Funny how a website like secularprolife thinks it has the right to tell real pro life ministries about how they should worship god. Actions have consequences, and this woman tried to act irresponsibly by violating the terms of her contract. She's basically telling her students that there are no consequences to immoral sexual behavior. The school had to fire her to protect the quality of the learning environment. Perhaps she'll have to work in a place more fitting for a woman who can't keep her legs closed. That's the cold, hard truth.

This is a tough one all around for me.

As a follower of Christ I don't find the college's actions very Christ-like. The couple made a mistake, Christians screw up, they then did the work to fix their mistake. Got married and kept their child. Considering a large majority of women aborting their children claim Christianity id say that all wasn't a given.

However, As a former business owner in a basically Communist state I think businesses should have complete hiring/firing control without govt meddling.

As a prolifer I cringe at the college's actions, its already hard enough being pregnant in the work force. (Thankfully I never dealt with it)

So I'll go with college's actions = not prolife. The firing was justified but not in the best interest of spreading Jesus' message of love and redemption! Finally the double standard of hiring the other party engaged in PS goes without saying, but again its their college, their $ in my mind. A natural consequence might be future students choosing to go somewhere else or they will pay lots of $ defending their actions in court.

The thing that makes me wait on this is I haven't seen the college's pov yet.

If not for the hiring of the hubby, I'd be all on the side of the private employer keeping a contract. But seriously, even so, there are far more Christian ways to do it... referrals, placement assistance, severance packages... waaaaay more helpful ways to do this - BUT since they did give her job to the husband, (providing he signed the same contract) I think an uneven application of the employment rule is reason to void it. If she can show that others before her engaged in premarital sex, the school knew, and no one was fired, then she's got a case.

A fine example of why you can be Pro-Life or you can get upset when someone has sex before marriage, but you can't do both. Clearly this is sexism. When was the last time a man got fired for premarital sex?

"One can understand a desire to have employees in a ministry who reflect
the values of the ministry. But when that becomes a legalism which
trumps the "love your neighbor" commandment, it becomes questionable."

Totally agree. I also see that this is encouraging abortion. No woman should be made to choose between her child and job.