Reminder: Human Beings Are Not Commodities

[Today's guest post is by SPL member Nathaniel Givens. It was originally posted on his personal blog and is reprinted with permission.]

Earlier this month, the New York City Health Resource Administration unveiled a series of posters designed to combat teen pregnancy. The posters have drawn widespread criticism, including drawing fire from both sides of the abortion debate. The primary complaint is that they stigmatize pregnant mothers, and that’s valid. There’s an even more sinister message, however, but it’s not drawing as much attention because it’s much more subtle. 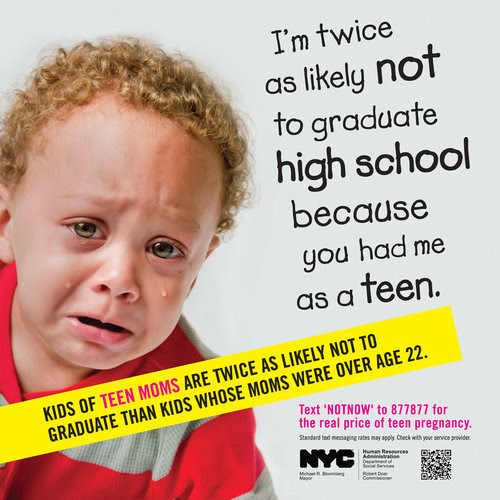 What the poster is implying is that human beings are interchangeable. If you get pregnant at 17 your kid is more likely to have a bad life. If you get pregnant at 27 they have a better chance. But it’s not the same child. Conception is the moment when a new organism is created. Unless you save that particular sperm and that particular egg for 10 years, we’re not talking about improving the life of a specific child. We’re talking about two entirely distinct children.

Does that matter? Yeah, I think it does. I think it does because Madonna going around and adopting children like they were Pokemon (“Gotta catch ‘em all!”), parents in India and China sex-selecting their children by killing off the girls, the fact that 95% of babies with Down syndrome get aborted, the entire industry of IVF that tends to treat children as an upgraded model of those purse-dwelling toy dogs, and the looming bioethical quandary of designer children all contribute to the commodification of human beings.  Implicit in all of this is the idea that–as long as you terminate the pregnancy before birth–you can have a do-over. As though a human being were like a laptop or a car or a cup of coffee: a purchase you can postpone by returning the merchandise or a transaction you can unravel if the situation changes.

Yes, I’m pro-life, but you don’t have to be pro-life to be troubled by this trend. Even those who think abortion should be legal can recognize that a living human organism has some moral value, and that we ought to treat them as something qualitatively distinct from products. I’m not saying that these posters are creating that perception, but they sure are disturbing reflections of it.
Posted by secularprolife.org at 8:31 AM

Great post, Nathaniel. I think you've hit on something important. It seems that some pro-choicers have an unexamined quasi-belief in reincarnation!

Good post! This is one of the things that's been bothering me about those ads, but I wasn't quite able to put it into words. *That particular child* would either have been born when his mother was a teenager or not at all. It doesn't make logical sense to essentially say "you should have had me later."

“When we consider that woman are treated as property, it is degrading to women that we should treat our children as property to be disposed of as we see fit.” Elizabeth Cady Stanton

I would hope that's what they are doing, but it could also give people the idea that abortion is an option as well ..while legally is not sure that's what this poster is trying to convey. But I think it needs more info..like it should say somewhere "practice safe sex" or ..that line "sex can wait"..or something that truly explains the message they ARE trying to convey.

Just looks like their using scare tactics to me. And when people are scared they may choose abortion.

Thanks for this article.....great hearing your organization speak at Columba University Thursday Night......Keep up the great work