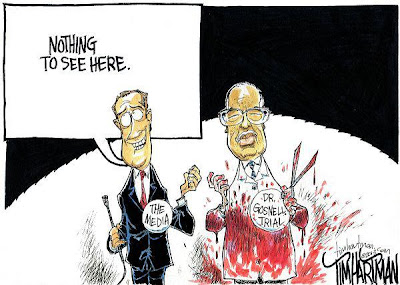 You wouldn't know it from the major network coverage, but abortionist Kermit Gosnell is currently facing trial for multiple counts of murder. Witnesses are giving horrifying testimony of Gosnell beheading live newborns. Kirsten Powers puts it better than I can in this USA Today piece:

Infant beheadings. Severed baby feet in jars. A child screaming after it was delivered alive during an abortion procedure. Haven't heard about these sickening accusations?

It's not your fault. Since the murder trial of Pennsylvania abortion doctor Kermit Gosnell began March 18, there has been precious little coverage of the case that should be on every news show and front page. The revolting revelations of Gosnell's former staff, who have been testifying to what they witnessed and did during late-term abortions, should shock anyone with a heart.

Read the whole thing. It's worth your time.

For the Cliff's Notes version of Gosnell's criminal enterprise, watch the incredible documentary film 3801 Lancaster (it's free). In addition, Operation Rescue has regular updates from the courtroom; more revelations are coming forward every day.

Yes, this story is extremely disturbing and likely to upset most people. But that hasn't stopped news networks from reporting on newsworthy stories before. So let's rise up and demand that the media cover this scumbag! (And not like this.)

Students for Life of America recommends the Twitter hashtag #Gosnell. This can be as simple as tweeting your preferred media outlet to ask: "Who is Kermit #Gosnell?" Or, you can tweet a link to the USA Today story, 3801 Lancaster, etc. Whatever form it takes, make sure your voice is heard. If we don't get this story out, it appears that no one else will.
Posted by secularprolife.org at 7:08 AM

I am thankful for radio talk show host Mark Levin for having brought attention to this horrific story. If you ever had any doubt about Liberal media bias, the complete ignorance of THIS story should leave no doubt in your mind.