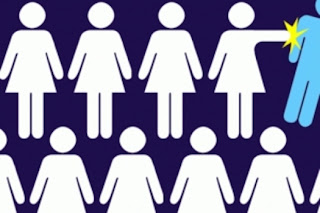 Stumbled upon this Elle story about men who don't want to be fathers but are "forced"* to by their pregnant partners.


Dubay's argument was that while his girlfriend was permitted by the Constitution to end her pregnancy for any reason, he had no comparable right, in violation of the Equal Protection clause. As a result, he contended, he shouldn't have to be financially responsible for the child.

As the public face of the case, Feit duked it out on CNN with then–National Organization for Women president Kim Gandy, who argued that once a child is born, the rights of the child supersede those of the parents. Since this was the law in all 50 states, men had to accept their financial obligations, Gandy said. Elsewhere on the airwaves, Dr. Phil chastised Dubay—he'd exercised choice, all right, a choice to practice condomless sex. And Fox's Bill O'Reilly bullied Feit with declarations about what it means to be a man and taking responsibil­ity for one's own actions.

As Feit points out, this reasoning is ironically similar to that often used against women's reproductive rights: Abortion encourages sexual promiscuity and irresponsibility; the right of the fetus should override a woman's right to terminate a pregnancy that could've been avoided with birth control; women should have to suffer the consequences of their sexual dalliances.

Interesting conundrum. Do the men have a point? Do abortion rights and child support laws create a sexist standard? I say it depends. It comes to this: Why do pro-choicers think abortion is justified?

If abortion is justified because of bodily rights, then the double standard between the genders makes sense. When it comes to procreation, men and women don't have the same bodily responsibilities at all, so of course they don't have the same rights either. If it's about bodily rights, you can just say "no one can use your body against your will" and that is as true of men as of women. Sure, it never actually comes up for men in terms of pregnancy, but if it did they'd presumably have the same choice to abort; it's a consistent standard. 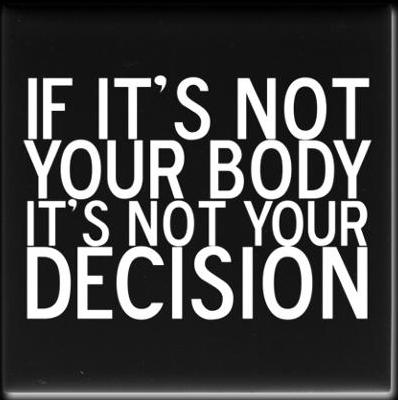 When we talk about reproductive rights, we talk about women being able to choose whether and when they want to become mothers. We talk about each woman carefully considering her responsibilities to her other children, or her educational and career goals, or her concerns over a bad relationship, or her financial issues. What does any of that have to do with her body? Planned Parenthood's motto (Every child a wanted child!) isn't about bodily autonomy--it's about whether people want to be parents, whether they want to reproduce. It's about reproductive rights.

Even in Roe v. Wade itself, the Court created a right to abortion based on much more than bodily concerns:


Specific and direct harm medically diagnosable even in early pregnancy may be involved. Maternity, or additional offspring, may force upon the woman a distressful life and future. Psychological harm may be imminent. Mental and physical health may be taxed by child care. There is also the distress, for all concerned, associated with the unwanted child, and there is the problem of bringing a child into a family already unable, psychologically and otherwise, to care for it. In other cases, as in this one, the additional difficulties and continuing stigma of unwed motherhood may be involved.

So the Supreme Court considered:

None of that is about bodily rights.

But the Court didn't leave bodily rights out entirely. In the above passage, they also cited concern over  direct medical harm during a pregnancy and physical health during child care. Then again, the Court disagreed with the idea that the right to abortion is absolute or has much to do with unlimited bodily rights.

...some amici argue that the woman's right is absolute and that she is entitled to terminate her pregnancy at whatever time, in whatever way, and for whatever reason she alone chooses. With this we do not agree. ... The privacy right involved, therefore, cannot be said to be absolute. In fact, it is not clear to us that the claim asserted by some amici that one has an unlimited right to do with one's body as one pleases bears a close relationship to the right of privacy previously articulated in the Court's decisions. The Court has refused to recognize an unlimited right of this kind in the past.

So this isn't just about bodily rights. Wouldn't all the non-physical reasons a woman might be unwilling to raise a child apply equally to an unwilling man? If pro-choicers believe in not just bodily rights, but reproductive freedom, why do so many of them apply that freedom to women only?

*I put the word "forced" in quotes because, unless you were raped, no one made you get a woman pregnant, and therefore no one made you become a father. You took that risk yourself. The difference between me and most pro-choicers, though, is that I apply the same logic to both genders.
Posted by Unknown at 9:52 AM

I don't think pro-lifers really gain anything by raising such questions. It's true that, strictly speaking, if all abortion is about is "reproductive freedom," then men should have some rights to compensate for women's right to abortion. But since the real crux of the whole abortion debate is precisely women's bodily rights and not merely reproductive freedom, I think we can simply ignore the inconsistency in the rhetoric and talk about the real issues.


More importantly on a rhetorical level, at no time in the history of humankind have people in general been moved to sympathy by examples of men's powerlessness before women. Sorry, but our instincts are not egalitarian.

That seems logically consistent to me.

Back in pro-life shoes, this could present an opportunity to point out that women likewise must not exercise their reproductive rights at the expense of fetuses' bodily rights.


But if everyone agreed that fetuses had bodily rights, we probably wouldn't be having this discussion.

It's actually not a consistent standard. David Boonin would argue that a man has a responsibility to the pregnancy but a woman doesn't due to bodily rights. However, if you really look at what forcing a man to be a father entails, 18 years of labor working at his job to provide child support to the unborn child, compared to just nine months of carrying the child inside her, it seems that the man actually has the greater burden and so should likewise be able to opt out, if the government insists on leaving abortion legal.

There's a middle ground between having no say and insisting on an abortion-- opting out of the responsibilities of a father. That would seem more consistent.

They enter in because a financial obligation is still a bodily obligation. He must use his body to perform labor to earn money that is used, sometimes against his will, to support a child he may not even want. If a woman has a right to opt out of parenthood, surely the father should have the same right.

Have to agree with M, here. I think you're missing the distinction of bodily rights. When did we stop using the term "bodily integrity"? That's the more accurate term. Being forced to pay with your labor is perhaps an infringement on your rights, but it would hardly seem to affect your bodily integrity. Carrying a child in your womb can be compared to such things as giving up an organ. For most people, I think, the right to keep your bodily organs to yourself would seem to be in a category all its own. And arguably, it deserves special recognition higher than our right to our property or labor.


Still, I do admit that completely denying men the right to opt out of parenthood seems inconsistent. When you put it in perspective, 18 years of labor does seem like quite a lot to compensate for a woman's 9 months of pregnancy, which she could have legally aborted.

Well if she chooses to have the kid she has to support the kid for 18 years too. It's not 18 years of his labor and nothing from her, it's resources from both of them.

Still, she has that window of time when she can "opt out" and he can't. Seems problematic.


No, the purpose of these questions is to get third parties--the theoretical "on the fence" silent observers--to consider what abortion is really about.

What if you are PC and agree men should be able to opt out of their parental rights within a certain amout of time after finding out about the pregnancy?

I would also like to add one more right to this discussion: the right not to get held responsible for the decisions of others (and the consequences of these decisions). For instance, I wouldn't (and shouldn't) get thrown in jail if a relative of mine robs a bank. Likewise, if one accepts the pro-choice view that personhood begins at birth/viability/the point of sentience/et cetera, then while abortion is legal the decision to create a new person is purely the woman's. Therefore, why should the man be held responsible for the woman's decision (using pro-choice views on personhood) and be forced to pay child support against his will?

"It's not the same thing as an obligation to actually let someone else use your body."


True, but you will need to explain why this difference is relevant. Clinton has a point that one can argue that being forced to do labor for 18 years in order to earn income to pay child support is a greater burden/sacrifice than being pregnant for 9 months against one's will.

Also, Boonin would need to explain why it's morally justifiable to hold men responsible for the decisions of women.

"Carrying a child in your womb can be compared to such things as giving up an organ."

Not quite. A forced organ donation is permanent, while a pregnancy is temporary. Also, I don't think that it is legal to take back your kidney if it was accidentally donated to someone else in a hospital mix-up despite the fact that it remains a part of your body.

"And arguably, it deserves special recognition higher than our right to our property or labor."

"Still, she has that window of time when she can "opt out" and he can't. Seems problematic."

Bingo. The burden on the woman's part is voluntary, while it is compulsory on the man's part.

Also, women are able to use Baby Moses laws to escape the burdens of parenthood after birth without the consent of the child's father.

Then I will respect this individual's position much more, even if I won't agree with it.

In addition, a debate about child support also always needs to include the right not to get held responsible for the decisions of others. Rather than argue about reproductive rights, I simply argue about this right when discussing/debating child support with pro-choicers.

Also, as a side note, I want to point out that I have not heard a convincing argument from the pro-choice side against being forced to let someone else use your body if you're the one who created a situation with a dependent person (meaning the other individual in this scenario).

Pro-choicers seem to have a religious-like belief in absolute bodily autonomy which in my opinion doesn't make much sense. I support the right to bodily autonomy--I simply don't think that it should be absolute.

Except you forgot one right--the right not to be held responsible for the decisions of others, which I'd say is more important than either of the other two rights which you mention.

There is no corollary, as there is no time the biodad has the child attached to him in a manner that would violate his bodily integrity, thus no legal or moral reason for him to kill. .