A couple days ago, The Huffington Post published an article titled, "California Teen Pregnancy Rates Drop 60 Percent Thanks To Sex Education." But wait! You think, after carefully reading the article. HuffPo is talking about teen birth rates, not teen pregnancy rates. Those aren't the same thing.

Too true, dear reader, too true. And that's an important distinction for us pro-lifers to make. Why? Because the birth rate can drop even if the pregnancy rate stays the same if women are getting more abortions. A decreasing birth rate doesn't necessarily mean a decreasing pregnancy rate.

Here is a graph of the birth rate in California, according to the California Department of Public Health: 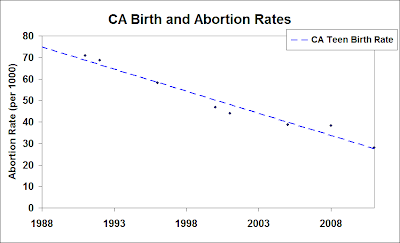 Well, let's see. Here's the graph when we add in California's overall abortion rate (that is, not just teen abortions, but all women age 15-44): 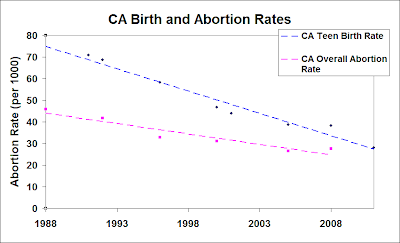 If the teen birth rate was only going down because of abortions, the abortion rate would be increasing. But it's actually quite the opposite.


So although Huffington Post didn't bother looking at the (crucial) abortion rate, they happen to be correct that not just the birth rate is declining, but the pregnancy rate is declining as well. There are fewer teen births *and* fewer teen abortions in California since comprehensive, medically accurate sex education has been implemented.

But wait!! You say. Correlation isn't causation! And you are so right! I'm glad you remembered, because people forget that all the time. So: is the declining teen pregnancy rate because of comprehensive sex education?

Since abortion rate was actually not correlated to a state's emphasis on abstinence-only education, the reason birth rates differ is because of differing pregnancy rates. States with less abstinence-only education (and more comprehensive sex education) had lower pregnancy rates. Still too much correlation? Well it helps that this study even accounted for "socioeconomic status, teen educational attainment, ethnic composition of the teen population, and availability of Medicaid waivers for family planning services in each state."

So it looks like HuffPo is right, and comprehensive sex ed has been helping California reduce teen pregnancy. And I know at this point you're all thinking something along the lines of Woohoo! Me too, dear reader. Me too. :)
Posted by LN at 7:22 AM

Great article, LN. I would add that California remains a serious problem state for abortion, with an abortion rate MUCH higher than the national average. That's for a number of reasons, including a culture that's more accepting of abortion (CA actually legalized it before Roe), a ridiculously high number of abortion businesses per capita, and few legal limitations. I think what you've shown is that California is doing what it can on the "back end" (preventing unwanted pregnancies) and what's left is to put in some real effort on the "front end" (persuading pregnant women to choose life).

This is great news, I really wish more pro-lifers would get behind real sex education, yet for them religion plays a part and they don't reliaze they're shooting themselves in the foot.

I am so happy to see that you've made the distinction between teen pregnancy rates and teen birth rates; it's endlessly frustrating to me to read articles where the two terms are used interchangeably.


Where did you get your statistics on abortion rates? Is that also from the CA Dept. of Public Health? If so, how are those stats collected? I know that the CDC's numbers on abortions in CA are always much lower than the Guttmacher Institute's numbers, because the CDC uses only what's reported and reporting is voluntary (Guttmacher also uses voluntarily provided numbers from a survey, but uses statistical methods to weight them in much the same way opinion polls are weighted, so that you can get a reasonably accurate number from a small sample size).

I'd add that, assuming the methodology remained the same over time, the rates of decrease are probably about right. I mostly wonder about the raw numbers.

Yup, I completely agree. It'd be far better if CA was more pro-life, but I'm glad to see sex ed is doing more help than harm despite what some people want to think.

Yes, I used Guttmacher. I actually couldn't find any stats otherwise. I tried the CDC but CA's slot was just empty every year that I looked. And I did find one link that revealed that Guttmacher's numbers are higher than the CDC's (http://www.cdc.gov/nchs/data/hus/2012/008.pdf). I'm very interested to hear more about how Guttmacher gathers their data if you have any links on it!

But as usual, the actual solution lies somewhere between the two opposite ends of "comprehensive sex ed" and "abstinence-only education". The numbers indicated that states with primarily fact-based sex education with a leaning towards stressing abstinence are the states with the lowest teen pregnancy rates. "1" sounds about right, and where things should be, anyway. But I doubt either side is going to actually look at the facts and change their viewpoint to actually work together to address the facts rather than push their agendas. I'm just sorry that children are the ones who will suffer for this.

That is simply called "having f*d-up priorities", and it's not doing the Pro-Life Movement any favors.

California doesn't show up in the CDC stats because CA is one of several states that is not legally required to compile and publish abortion stats. That's why the CDC national abortion stats are pretty much useless, since some evidence suggests that as many as 20% of abortions happen in California.


I believe the Guttmacher stats come from clinics volunteering stats on an individual basis, but I've never really looked into that.

LN, I really appreciate the format of this article. You answered the questions that were coming up in my head as you went, almost like you were reading my mind! The work you did on checking the pregnancy, birth and abortion rates, as well as looking at the results from other states was very helpful.

I personally think that religious people can support comprehensive sex education without wanting to personally hand out condoms, for conscience reasons. I recently moderated a discussion on that topic on Life Report, if you're interested: http://prolifepodcast.net/2013/05/170/

"They're not shooting themselves in the foot by taking a principled position on something you disagree with." Are you saying that in general? Because as a general statement I very much disagree: it is quite easy to shoot yourself in the foot by standing up for your principles. In this particular case, I think many pro-lifers are likely losing more than it's worth by holding the line on things like birth control.


Sure, it's important to understand where people are coming from, but after having understood, it's still important to say whether you think they're right or wrong.

I teach Comprehensive Sex education in CA. Based on the ed code, it sounds GREAT, a perfect balance between both sides, in reality, not so much. The "most commonly used" sex ed curriculum in the state is riddled with errors. The curriculum simply urges students to use condoms (without teaching them the #1 most important and most often missed step) and sends them to Planned Parenthoods.

The Dept of Ed has been aware of these errors for over a year and has done NOTHING!http://www.kcra.com/news/does-current-sexed-curriculum-in-california-go-far-enough/-/11797728/20228460/-/14kj5xfz/-/index.html
CA has 1/7 of all the AIDS cases in the nation and 23% of all the nation's abortions happen in CA. Maybe a better indicator into how well CA is doing is to look at the STD/STI rates in the state. IF CA sex ed is working we would have fewer cases of STD/STIs, we don't. http://liveactionnews.org/problems-revealed-in-california-sex-education-for-students/

I agree that comprehensive sex education with an emphasis on abstinence (but still covering all forms of contraception, et cetera) appears to be the best one. This is what I was taught in sex ed here in California back in middle school (almost a decade ago). Of course, I strongly wish that sex ed would also include teaching students the current child support laws and court decisions in their respective states--heck, I didn't know what the child support laws and court decisions here stated (and how incredibly harsh they were towards males) until I was 19 and until a fellow pro-lifer in one of the Facebook groups that I am in told me this info. It's a good thing that I did not have sex and accidentally get a girl pregnant before that point and before fully knowing how much this could have screwed me over.

Yeah, I am with Jameson and Faye here. I would be willing to compromise on my principles in certain cases if it means achieving much better results than we would otherwise achieve.