Recently, a fellow pro-life atheist who is active in Secular Pro-Life shared this on facebook: 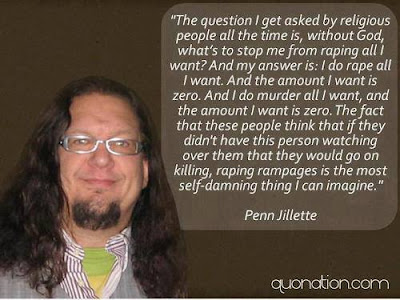 Jillette is obviously not the only person to have this thought, but he expresses it quite well. The argument that we need religion to make us behave is a lousy argument.

The problem is that many people throw this reasoning completely out the window when the topic turns to abortion. Here, I do not mean Penn Jillette; he's pro-choice, but has always been respectful of those who disagree. But for too many pro-choice atheists, abortion is "just a religious issue," pro-lifers are "the American Taliban," and any suggestion that abortion is unethical is just "fanatics trying to impose their religion on others."

I'm a fan of the "good without God" messaging that's been popularized in recent years. But that message is wildly undermined every time an atheist group advocates for abortion, especially the extreme position of abortion on demand at any point in pregnancy. Most people, whatever their religious background or lack thereof, find such a worldview morally abhorrent, for good reasons. It's enough to convince a person on the fence to stay in the atheist closet.

The pro-life movement and the secular movement have something in common: they are both in the midst of internal debates over whether or not they should be "single-issue." I have long encouraged pro-lifers to resist coupling abortion with issues like same-sex marriage or fiscal conservatism. To the secular movement, I now offer the same encouragement: keep it single-issue. Do not tie non-belief to support for abortion.
Posted by secularprolife.org at 7:22 AM

Would you consider grouping abortion with other life issues a folly? I found it quite interesting being in Texas -- a pretty vehement pro-abortion rep agreed that he would vote for HB2 if there were an amendment to abolish the death penalty added, claiming that "if we truly value human life, we would not allow the government to take it either." I was bowled over by his consistency, and then later found out he was voting against the bill and was shocked by his hypocrisy. At least he understood the foundational principle, right? Or at least, kind of.

I would. While I don't support the death penalty as it stands, neither do I support it being entirely abolished. I can differentiate between a person who has done nothing but exist and a mass murderer, serial killer, etc.

Good article. It's always kind of annoying when you find avid atheists who take an extreme pro-choice stance seemingly as some kind of rebellion against religious groups. Relgious groups have opinions on abortion, but it is certainly not a religious issue in any way.

I think non-theists can claim that morality is self-evident and therefore needs no grounding. Why can't someone recognize self-evident truth just as easily as someone else might recognize God?

Very nice post. I really think the pro life movement NEEDS to become secular, and now may be the best time in decades.

Bashar al-Assad in Syria says he's a religious Alawite yet he's a mass killer. He has "God" on his side? No, he's just anti-life, and not abortion of course. He is just an example of so-called "God fearing" individual. Hypocrite, I'd say.

I like Penn, but he's kinda off when he talks about God. Christians don't believe God makes them a "good person". In fact, most Christians I know (me included) believe "good person" is an oxymoron. (By God's standards.) We believe we need God because we are NOT "good people." And not raping/murdering anyone doesn't elevate us to "good person" status. The other thing is: What of people that think it IS okay to rape and murder (those people do exist) If the only standard we're using is our own, what makes us right and them wrong? Why is your "I don't believe in murder" standard any better than Charles Manson's belief that it is okay? If all we use is human standards, it's nothing more than opinion.