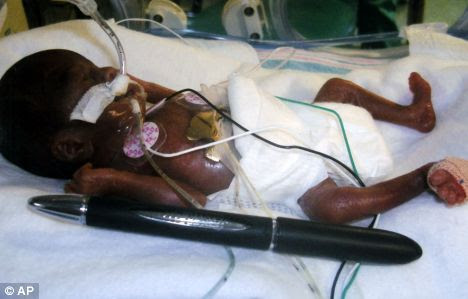 This is a photo of Amillia Rose Taylor shortly after her birth in October of 2006. She was born very prematurely, at just 21 weeks and 6 days. But she survived, and today is a healthy little girl.

History will be made today. The people of Albuquerque, New Mexico have the opportunity to redeem their city, which is currently has a reputation as the late-term abortion capital of the country. Polling indicates that a majority of voters support the proposed ban on abortions after 20 weeks, but there are no guarantees.

Pro-life groups have lots of boots on the ground. Pro-life students are canvassing and making phone calls. Live Action recently released an investigative video revealing that Southwestern Women's Options, the local late-term abortion center, sends patients to a hotel to deliver their dead babies. The Susan B. Anthony List is running television ads. And the pro-abortion webzine RH Reality Check reports that early voter turnout has been "historic."

Of course, supporters of late-term abortion aren't rolling over. They have their own television ads, their own canvassers, and no shortage of money. We have to give this our all.


Municipal elections rarely garner much attention outside a city, but in this case, it is of national concern because the largest late-term abortion clinic in the nation operates in Albuquerque, drawing customers from every state for abortions halfway through pregnancy and later. The passage of this ordinance will save lives across America. From a political standpoint, there are national implications to this campaign. If the ordinance can win in this blue-state community, it will send a strong message to Washington that the people want and need a similar ban on late-term abortions at the federal level.

Waiting on pins and needles...

Its not disappointing. The rights of a women's privacy is being upheld, no disappointment here.