Best "parasite" I've ever heard of! 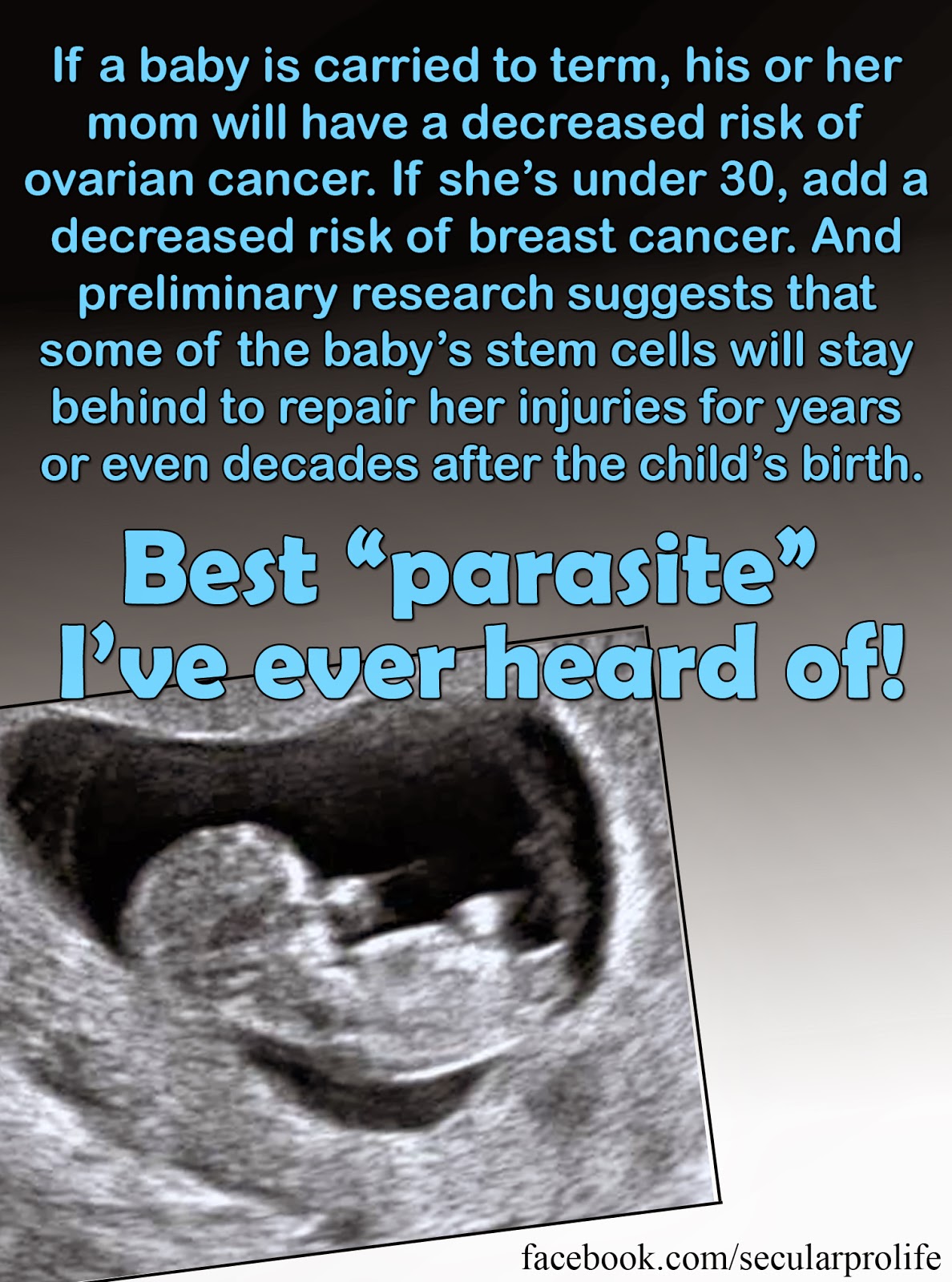 Today's blog post serves as a place to compile sources for the assertions in the above graphic. As an initial matter, let me note that it is not Secular Pro-Life's position that unborn children must "earn their keep" to have the right to life. (In the same vein, the fact that infants sleep and poop and don't do much in the way of making immediate contributions to society does not justify infanticide.) This is simply an attack on the pro-choice movement's misuse of the dehumanizing term "parasite." So, moving right along:

"If a baby is carried to term, his or her mom will have a decreased risk of ovarian cancer."
According to the American Cancer Society, "Women who have been pregnant and carried it to term have a lower risk of ovarian cancer than women who have not. The risk goes down with each full-term pregnancy. Breastfeeding may lower the risk even further." The protective effect of pregnancy can last twelve years or more. The spacing of births does not appear to be a factor.

"If she's under 30, add a decreased risk of breast cancer."
Although women's heath groups agree that giving birth at a young age decreases a woman's lifetime risk of breast cancer, the exact maternal age limit is hard to pinpoint. BreastCancer.org states "Women who have never had a full-term pregnancy, or had their first full-term pregnancy after age 30, have an increased risk of breast cancer," while the Susan G. Komen Foundation reports that childbirth protects first-time mothers as old as 35. The underlying hormonal mechanisms are not fully understood; see this Science Daily piece for a recent study on mice that may provide some answers.

"And preliminary research suggests that some of the baby's stem cells will stay behind to repair her injuries for years or even decades after the child's birth."
Much research remains to be done concerning this phenomenon, which is known as fetomaternal microchimerism. "Fetal cells exhibit a remarkable ability to migrate across the placenta into the mother and to integrate with diverse maternal tissues and organs, apparently homing in particularly to sites of damage and disease." Recent studies of mother mice who suffered from strokes and heart failure indicate that fetal cells have a healing effect.

P.S.-- Many thanks to SPL supporters Natalie and Andrew V. for allowing their son Bennie to model for the picture.
Posted by secularprolife.org at 7:13 AM

Obviously pregnancy is NOT needed to obtain the beneficial effects described. Only appropriate hormones are necessary. Besides, the world is overpopulated; the LAST thing we need to do is encourage more pregnancies.


At the rate genetic-engineering techniques are developing ways for bacteria to produce special proteins, you can be sure that just about as soon as all the beneficial hormones, associated with pregnancy, are identified, somebody will be selling a cocktail of them for general consumption. No woman would EVER need to be pregnant to benefit! (And, possibly, some benefits might be found for men, also. To be researched....)

And since stem-cell researchers are looking for ways to turn ANY ordinary cell that possesses human DNA into a stem cell, we will be able to do even better than making use of fetal stem cells (because sometimes those lead to alien-tissue rejection). Your OWN cells, some of them, can be converted into stem cells, and re-injected.

Actually, the world is not overpopulated. The world's resources are just not being used/divided evenly.

And if the world WAS overpopulated, why don't we kill murderers instead of unborn babies?

So tell people to share and then magically they will share and everyone will live happily ever after right? Because its just that easy? Resources are in infinite supply, and its not like humans are at the mercy of weather or anything right?

Why don't doctors prescribe pregnancy as a cure all then? For cancer, diabetes and auto immune diseases? It would also help to save male lives. My bf would probably love to get knocked up if it would cure his overactive immune system permanently.

It doesn't really matter. What go's up MUST come down and humans of course can delay the inevitable. There are other factors you have to take into consideration as well. If we were to mindlessly breed and create the mindset like pro lifer's do to carry every unborn human to term we will have problems.
The more land you have to knock down to create more space for the humans pro lifer's want born the more you will be fucking up the ecosystem and once a species in a area go's extinct because of human activity then everything else falls apart shortly after.

What is your definition of "quality of life"? IF it has any similarity to the quality of life of the average middle-class American, then the world IS overpopulated, because in order to obtain the resources to give everyone the same quality of life as those Americans, we need about 3 more Earths.
cocoalounge.org/viewthread.php?tid=51624

But if you think everyone should be scrabbling equally for the next meal, AND if you think people would willingly trade their current quality-of-life for the subsistence life-style, then, sure, there is room for even more people.

I really don't know what fantasy pro lifer's actually live in. Out in the real world there ideals just don't work.

Many pro choice libs live in the same fantasy world. They believe that the earth can support trillions of people and that the next Einstein will magically invent products that will feed everyone for time eternal and make us immune to climate changes. Oh, and that if you tell people to share - like in Rwanda and the Sudan (whose problems were caused and sometimes exacerbated by environmental pressures) that evetyone will magically hug and make up.

I really don't think this way at all so we are good.

"My bf would probably love to get knocked up if it would cure his overactive immune system permanently."

We don't have the technology to do this yet, though.

(For the record, I myself, as a current biological male, would love to get pregnant at least once as well.)

Like most reasons that pro-choice folks use to argue that we need abortion, the (somewhat dubious) claim that the world is overpopulated is either unnecessary or insufficient to justify abortion, depending on what an unborn human is.

If it's unnecessary to justify abortion, it's because the unborn aren't persons and that's all the justification you need. If it's insufficient to justify abortion, it's because the unborn are persons and we obviously can't just start letting people be murdered in the name of stopping population growth. It's not like we let parents kill their newborns if they decide they don't want them anymore.

I claim that we need every possible tool available to PREVENT a Malthusian Catastrophe due to overpopulation. Abortion is such a tool. I say nothing about REQUIRING the use of this particular tool. I simply say it needs to be as available as other tools.


The MOST important rationale for abortion is, it is a useful "backup plan" when ordinary contraceptive methods fail. The fact that contraception is used means that various pregnancies are definitely not wanted. This means, if they occur despite not being wanted, EITHER abortion is necessary to end them, OR we will have more mouths-to-feed added to the overpopulation explosion.


The topic of overpopulation is NOT TOTALLY irrelevant, to the Overall Abortion Debate.

I also did not say anything about the practice being required, so I'm not sure why you bring that up. We shouldn't even allow killing newborns, because killing people isn't an acceptable tool to use against Malthusian Catastrophe. If the unborn are people, we shouldn't allow killing them either.


Why isn't infanticide or abandonment an acceptable backup plan if a woman doesn't know that she is pregnant, of if the baby isn't diagnosed with a disability until birth, or if circumstances change such that the baby is no longer wanted? Maybe one parents walks out and the other doesn't want to do it alone, or they lose their source of income. Maybe they just decide a baby isn't all it's cracked up to be.


Obviously those things are not okay because the baby is a person. If the unborn are also persons, it follows that abortion isn't an acceptable backup plan.


Because they're people. If the unborn are people, same deal. If you're trying to justify abortion, "there will be another mouth to feed" isn't a good enough reason.

If a newborn baby is unwanted for whatever reason, either infanticide is
necessary or there's another mouth to feed. Actually, there's another
mouth to feed even if the baby is wanted. Too bad, killing them or
letting them die isn't okay.

No, it isn't ok. But it's gonna happen whether you like it or not. Especially in times of famine etc. When it comes down to pure survival, people are not going to waste precious resources on a newborn that will probably just die anyway.

Or am I completely misunderstanding you here?

I would say that people "waste resources" on newborns and children all the time, even when times are tough. Much of the time we actually prioritize children and needy people in general. Do we always? No, of course not. But you can't make a blanket statement like that.


And in any event, even if that were true, does that mean we should legalize infanticide? Of course not.

I am talking about actual *survival* here. Not, oh look, times are tough, but we can make it if we just share the two scraps of food here with the newborn.

No, I am talking about actual life or death survival in sub-optimal conditions - which is most of human history, and which is still daily life in certain third world countries. Where, when the parents can barely feed themselves, it's not like they are going to have resources available to feed a newborn - lest they would prefer to die, because all the resources are going to the baby.

And no, I did not say a single thing about legalizing infanticide. I was just making a point - that in the real world, infanticide will happen, whether you like it or not, because when it comes to survival, people will let the infant die of exposure before they will let themselves die.

Infanticide happens quite rarely. What I'm trying to say is that with all due respect I'm not really sure why it's relevant to the abortion debate....Just because infanticide may happen in extreme survival situations, clearly doesn't mean we should just legalize killing newborns whose parents don't want them, so respectfully I don't think this has any bearing on the legality of abortion.

You brought it up.

I was just using it as an example of why overpopulation isn't relevant to the abortion debate: it doesn't justify killing people (of any age). When I said, "either infanticide is necessary or there's another mouth to feed," I was just quoting Ignorance but using "infanticide" instead of "abortion." Sorry if my point wasn't clear.

Perhaps you should look up the definition of "triage". There ARE circumstances in which actual people are NOT saved from imminent death. This is of course different from actively killing them, BUT... consider this: What if someone due to imminently die requests euthanasia? The alternative might be worse!

Wow, with that logic, you would be okay with killing an "unborn human" as you say, even after they are born. Because they are still attached to the placenta until someone cuts the umbilical cord. Ignorance at its finest.

Obviously you appear to be ignorant of the difference between "unborn" and "after they are born". Abortion is ONLY focused on the unborn, and the Overall Abortion Debate is about THAT, not, about harming those already born.