What do Americans think about abortion?

Will Saletan, the national correspondent at Slate, is a smart and independent thinker on the abortion issue. He even wrote a controversial but highly regarded book called Bearing Right: How Conservatives Won the Abortion War. Peter Beinart, editor of The New Republic, said that the book “will make activists on both sides of the debate uncomfortable,” and that “there’s no smarter political commentator in Washington today.” Meanwhile, on the other side of the spectrum, the editor of National Review Rich Lowry, called Saletan “one of America’s shrewdest political writers,” and added “If you care about the issue of abortion, you must read this book.”

So when Saletan weighed in on the question of Do Most Americans Think Most Abortions Should Be Illegal? for the 41st commemoration of Roe v. Wade, I was intrigued to read his perspective. The statistics on public opinion of abortion are pretty complex and very controversial. Saletan took an immediate dislike to a poll paid for by the National Right to Life Committee that provided unusually granular survey responses to a question about when abortion should be legal. 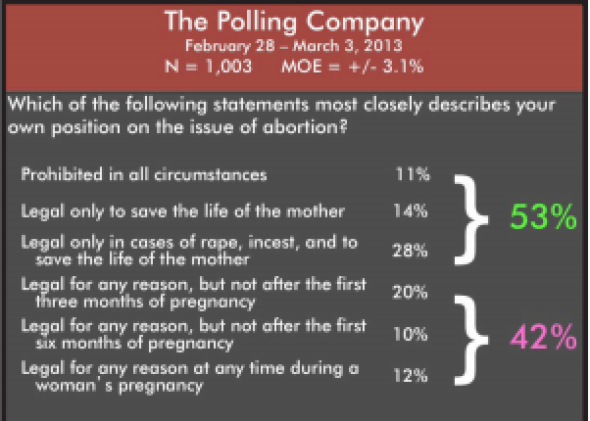 The poll (above) found that 53% of Americans fell within the broadly pro-life categories of opposing abortion at any time during a pregnancy with exceptions for the life of the mother as well as for rape and incest. The NRLC also published the results of a poll from Gallup (a poll that they didn’t choose the questions for), and that poll confirmed the findings of the NRLC poll: 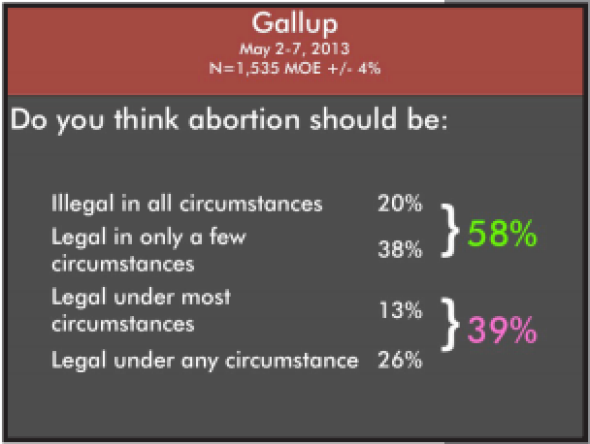 Based on these polls, one would conclude that most Americans are against most abortions, but Saletan thinks we should ignore these polls, and instead we should pay attention to a different collection of polls (also from reputable sources) that broke down abortion into the following cases: legal in all cases / legal in most cases / illegal in most cases / illegal in all cases.

As you can see, the NRLC and Gallup polls shows Americans opposed to most abortions. The polls provided by Saletan show the opposite. Who to believe?

Saletan argues that we should disregard the NRLC poll, but his reasoning is actually quite poor. According to him, the NRLC stacked the deck by picking 3 questions that are broadly pro-life and 3 that are broadly pro-choice, thus creating the false sense of equality between the two sides. Additionally, he suggests that with so many options, folks will just opt for the middle.

This argument makes no sense, primary because both the polls Selatan disbelieves and the polls he likes are identical in terms of his alleged shenanigans. Three of the six NRLC options are more or less pro-life, but so are two of the four options in Saletan’s preferred polls. Additionally, it makes no sense to talk about driving people towards the middle when there are six choices. Six is an even number. If there was a strong central tendency for poll responses (Saletan provides no evidence of this assertion, and I couldn’t find any either), then wouldn’t the NRLC have picked five options instead of 6? (Or seven?) And, once again, the polls are identical in this since both have an even number of choices with half being pro-life and half being pro-choice. In short: Saletan has offered zero credible evidence to prefer one set of polls to the other.

The simplest explanation is the most reasonable: both polls are correct. In fact, Saletan implicitly argued for this in a follow-up piece (published the very next day) called The Political Peril of Second-Trimester Abortions. He wrote, “Poll numbers are usually meaningful, even when they don’t mean exactly what the sponsors claim.” In other words: respect that the answers people give to the actual poll questions are the best you’re gonna get, and be suspicious of what people extrapolate from there. That means we should prefer a theory that accommodates both sets of polls rather than one that forces us to try and explain away either set. (This is especially true because the NRLC’s poll is backed by a poll from Gallup and another one from CNN/ORC).

I took the trouble of looking through all of the polls that Saletan compiled to see if I could find a pattern. And I did. I found a very, very strong pattern that Saletan didn’t pick up on, and it is this: poll respondents react very strongly to the way the words “illegal” and “legal” are used. Here’s the Gallup poll that backed up the NRLC results:
Here’s the CNN/ORC poll (scroll down a bit):
Note that the third option doesn’t contain the word “illegal”. That is different from the four options that Saletan mentioned: legal in all cases / legal in most cases / illegal in most cases / illegal in all cases. To see what ones of those examples looks like, take a look at the AP/GfK poll:
Now the third option includes the world “illegal.” That’s it, that’s pretty much the sole difference between both sets of polls. If the pro-life position is described without the world “illegal,” then Americans are pro-life. If the pro-life position is described using the word “illegal,” then Americans are pro-choice. Take a look at those polls again; when the third option uses the word “legal,” it is the most popular response (in both polls). When the third option uses the world “illegal,” it is the least popular response. The swing is truly enormous: support for the same option drops by about 67% when the word choice shifts from “legal” to “illegal.”

Unlike Saletan’s theory, the observation about the effect of word choice is actually strongly supported by empirically verified theory and also consistent with all of the results. That’s good. Unfortunately, it doesn’t actually make the answer to the question much more clear. So if you want the simplest answer to the question, it is this: Americans do not know if they want most abortions to be illegal or not.

I’ll go a little farther, however, and make two observations.

First, I’m inclined to think that the NRLC poll is actually the best poll of the bunch because it doesn’t switch between “legal” and “illegal.” It uses only “legal” throughout. (What I’d really like, however, is a comparison to the NRLC poll that asked the exact same questions but rephrased them to use “illegal” throughout.) My hunch (and I admit it is just an informed hunch), is that this probably takes some of the emphasis off of the emotional punch of the change from “illegal” to “legal” and gets closer to Americans policy preferences.

Second, I think that in some ways the most important finding is being obscured by all this discussion. We may not know exactly what Americans think about abortion, but we do know with certainty that the policy the American people want is a policy that is incompatible with Roe v. Wade. This becomes really clear in Saletan’s second piece (The Political Peril of Second-Trimester Abortions). In it, he used additional data from a poll funded by the Knights of Columbus and found significant erosion of support for abortion rights during the 2nd trimester even among the population that self-identified as strongly pro-choice. The decline in support was constant regardless of how the questions were asked. He concluded:


This doesn’t mean that most Americans think most abortions should be illegal. According to the most recent government data, 92 percent of abortions are performed in the first trimester. Beyond that point, abortions are much rarer and much harder to defend, both morally and politically. Without the protection of the courts, it’s difficult to see how they’d stay legal. [emphasis added]

In other words, the only thing standing between the will of the people and pro-life reform of abortion law is the Roe v. Wade decision. This is one of the common themes of the entire abortion debate: Roe v. Wade was such an absolutist ruling that it gave the pro-choice side everything it could possibly have wanted. Despite a thin veneer of moderate rhetoric it is, when combined with the Doe v. Bolton decision handed down the same day, a truly extreme position. As a result of getting everything they could have wanted, the pro-choice side has had nothing to win and everything to lose since 1973.

In contrast to the Roe v. Wade ruling, the American people are anything but extreme and absolutist. It’s clear that any abortion after the first trimester is outside the mainstream of public opinion. Within the first trimester, it’s harder to say where Americans draw the line.

In a sense, though, it doesn’t matter where they draw the line today. Right now that’s an academic question because—until Roe is overturned or modified in some way—there’s no way to touch first-trimester abortions. Or second trimester abortions, for that matter. This makes pro-life strategy obvious: focus on using the unpopularity of second trimester abortions to erode Roe v. Wade. Support for Roe is still deep and strong, but only because so few Americans understand what the ruling actually does. By name? Roe v. Wade is popular. By effect? It’s toxic. The key is to make defenders own the toxicity. (Related: It’s also important to help Americans realize how many of them already oppose abortion, because media bias causes us to significantly over-estimate the popularity of the pro-choice movement.)

And that’s really all you need to know about American opinion on abortion. When they see the facts, Americans still make the right choice. It’s true of Roe today, and I believe one day it will be true of elective abortions, regardless of trimester.
Posted by secularprolife.org at 7:22 AM

I could careless about the polls since this doesn't pertain to me since I live in Canada.

It's interesting how it appears that the 30% drop when using illegal was evenly divided out to the other 3 options. I don't even know what to make of that.

You could care less? So you do care.


I ask because there seems to be a disconnect between the way people poll and the way they vote. I can think of a number of reasons why this might be the case, one of which is that the polls do a poor job in capturing the nuances of both non-absolutist positions. I could certainly be wrong about that tho, which is why I'd like to see a broader set of polls (especially from people outside either absolutist camp who are IMO much more likely to be trying to shape public opinion than trying to report it).

I am comforted to know that most Americans are opposed to abortion, but at the same time, I don't care about popular opinion because it is all to easy for opinions to change and for people to believe lies. I know and feel that abortion is wrong because it hurts women and babies, I also want abortion to end in places other than America.